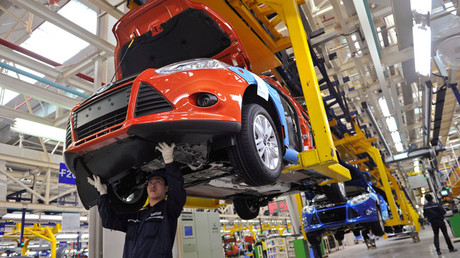 [Editor’s note:  I drive 3 BMWs, my daily drive is a 25 year old M3.  However, I would gladly own a Ford F150 or Dodge Charger or Camero, which make their European counterparts look like junk.  The Dodge, properly equipped, runs close to my twin turbo Beemer which cost $30k more and handles just as well.  Nothing in Europe matches a well equipped F150.  The new Cadillac CTS V does 0 to 60 in 3.7 with an engine more durable than a Porsche and a 200 mph top end.

The German car myth is just that.  The age of the old 5 litre SEL’s is done, the BMW 7 series is tired as well and the difference between German and American cars is non existent.  Today’s Ford’s do 155mph on the autobahn just fine, head to head with even the 2 litre diesel Beemers, the real rocket cars of today.

Volkswagens are not equal to any American car, certainly not as reliable.  I can tell you about a fender falling off an Opel.  My last ML Mercedes was built in the US and it was fine.  My X5 was built in Hungary and needs prettymuch continual repair.

There are few German workers in the German plants, Turks, Syrians and Africans make up much of the workforce.  Mercedes is owned by Arabs anyway.  Porsche still makes a good car for 100k, which can easily be duplicated in performance by lots of other things for far less.

Any German I know, and I know every grape farmer in the Mosel  River, would die for an American pickup truck…. Gordon Duff ]

Incoming US President Donald Trump’s threat to slap a German automaker with a 35 percent import tax has triggered a strong response from Berlin.

‘Anti-American’ tag by Trump a new nightmare for US businesses

Trump threatened to impose the tariff on US-bound BMW automobiles produced at plant in Mexico, scheduled to open in 2019.

“They can build cars for the US, but they’ll pay 35 percent taxes on every car that comes to the US,” said Trump in an interview with German newspaper Bild.

Trump suggested BMW should build a factory in the US, not in Mexico. “It would be much better for them and for our efforts,” he said, translated into German.

The plant is scheduled to open in 2019 to produce the BMW 3 Series sedan. The carmaker said production is destined for the world market, not exclusively for America. The plant in Mexico will complement existing sites in Germany and China.

Trump also accused German cars producers of unfair behavior. There is a Mercedes-Benz in front of every house on some American streets, he said.

“How many Chevrolets do you see in Germany? Not too many, maybe none, you can see nothing over there, it’s a one-way street,” Trump said. The US president-elect added he is pro-free trade, but not at all costs. “It must be a clever trade for me,” he said.

To this, Gabriel replied that “the US needs to build better cars.” The German minister also called for a harder position in trade talks with Trump. “We’re not weak and inferior,” Gabriel said.

In Frankfurt, BMW shares fell 1.42 percent after Trump’s interview, while shares in Daimler AG slid 1.31 percent. Volkswagen was 1.27 percent down.

After Trump’s threats of tariffs, Ford has given up a plan to build a $1.6 billion plant in Mexico and instead promised to create 2,000 jobs in the US. General Motors has no plans to move small car production to the US from Mexico because of Trump’s criticism of the company, said CEO Mary Barra.