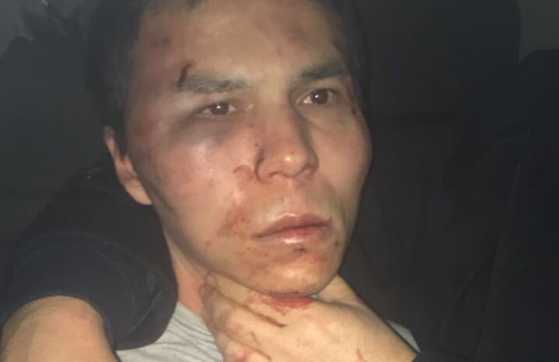 [ Editor’s Note: On one hand he does not look too happy, and on the other he has that Islamist extremist stare of no remorse for someone killing for god. At least the nightclub was not filled with kids; and the jihadis have killed many of those on purpose, for the sheer terror of it.

And all the foreign entities who supported them are legally guilty of the same crime. In the US, if you even know a child is being abused and don’t report, you are charged with the same felony as the actual perpetrator.

Just think of all the good upstanding citizens in all the security, defense and military organizations who are well aware of the extent the West, the Gulf States and Israel have been involved in proxy terrorism; and these organizations do and say nothing.

This guy of course is going to get burned, but how many aiders and abettors in the Western democracies are going to collect pensions for being involved in the same kind of work, only maybe at a distance.

Erdogan of course is going to try to play the victim in all this, but he is a dead man walking, as he turned Turkey into a jihadi express for setting up a constant flow of new jihadis going into Syria to replace the ones being killed, all while lambasting Assad for killing his own people. That’s not a nice thing to do… Jim W. Dean ]

The attacker, who slaughtered dozens at a nightclub in Istanbul on New Year’s eve, was caught during a special operation in Esenyurt, Turkish media are reporting.

The Uzbek attacker, Abdulgadir Masharipov, was captured by Turkish security forces late Monday at his friend’s house in the Esenyurt district of Istanbul, Daily Sabah reports.

The assailant, who has been on the run since the Reina nightclub attack on December 31, was reportedly transferred to Istanbul Police headquarters.

After Masharipov fled the scene of the New Year’s eve massacre, the terrorist initially hid in a safe house, where his wife and children joined him. The attacker then took his 4-year-old son and went on the run.

The boy was alongside the shooter when security forces arrested him on Monday evening, Sondakika reports. Masharipov resisted arrest, local media report, sharing a photo of the suspected attacker with bruises on his face.

Four other people, including a man of Kyrgyz origin and three women, were also arrested alongside Masharipov, Anadolu news reports citing sources. Operations against other potential terrorist cells is currently underway, the publication added.

Earlier this month, Turkish police released the identity of the alleged Reina shooter announcing that Masharipov is of Uzbek origin and is known in terrorist circles as “Abu Muhammed Horasani.” Authorities believe that he is the person responsible for slaughtering 39 people and wounding 65 others in Istanbul during New Year’s eve celebrations.

A massive manhunt has been ongoing in Turkey ever since the shooter fled the scene after firing over 180 bullets at innocent people at the Reina night club. Most of the victims were foreigners while 11 were Turkish citizens. During the manhunt, Turkish anti-terror forces reportedly detained at least 35 suspects allegedly related to the attack.

Previously, the Islamic State (IS, formerly ISIS/ISIL) terrorist group claimed responsibility for the New Year attack, saying it was revenge for Turkish military involvement in Syria.

The arrested suspect will be questioned, amongst other things, about possible links to “foreign intelligence services.” Just before the raid, Turkey’s Deputy Prime Minister, Numan Kurtulmus, once again voiced Ankara’s suspicion that Masharipov could not have perpetrated the attack without outside help.

“It appears the Reina attack is not just a terrorist organization’s act, but there was also an intelligence organization involved,” Kurtulmus told A Haber broadcaster on Monday, Reuters reports. “It was an extremely planned and organized act.”