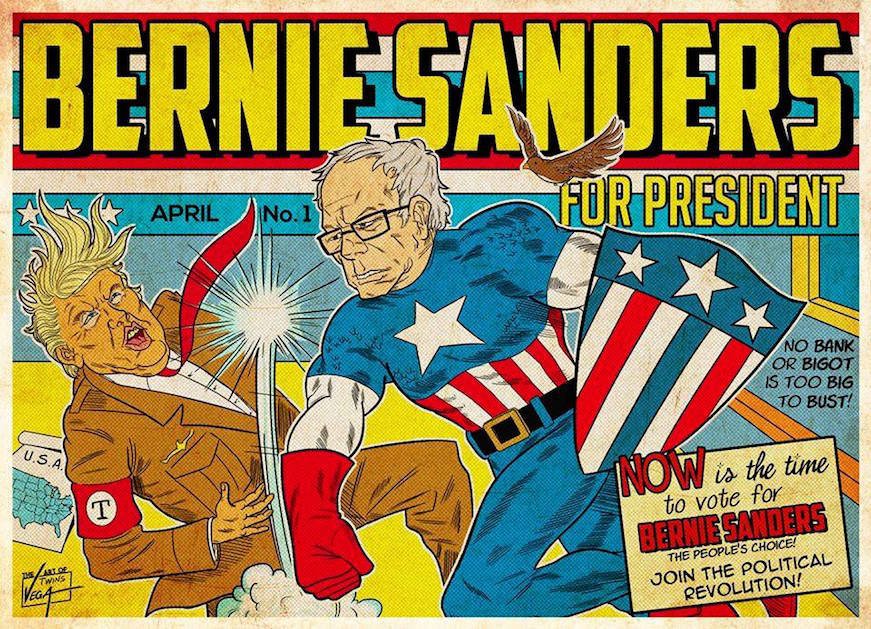 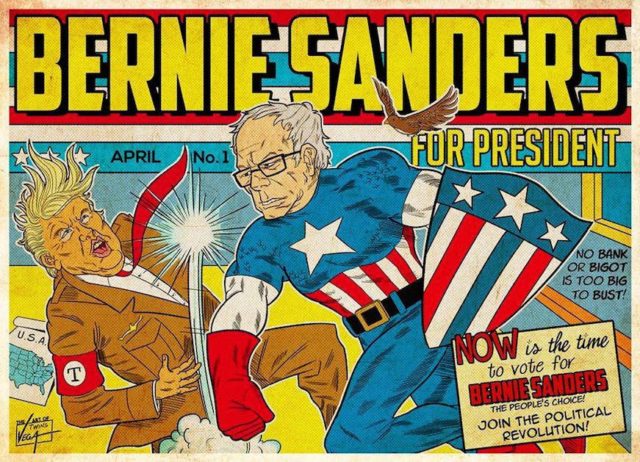 [ Note: I had to use this feature image for the lunacy of all it. Hillary and her DNC insiders hacked the crap out of Bernie, which the Wikileaks showed us all, and Donna Brazile subsequently left the planet.

Maybe she took the same spaceship as the ex-MI6 Trump dossier agent, Christopher Steele, whose sources are highly suspected of being primarily anti-Putin opposition people, as working with those folks would have been his job when on the MI6 payroll.

Bernie, the good soldier, did not gut her back. This was followed by the Dems being victims of a hack themselves, which many viewed as poetic justice from the Angels. Maybe whoever did it wanted the voters to be informed, something out Founding Fathers warned us would be critical to preserving what they had given us.

Act Three involved Putin being fingered for “interfering in our Democratic process”, when the US holds the world record for having done that to more countries that anyone can count, with the number one victim being Syria; yet, few Dems or Republicans seem bothered by Syria having been “hacked” by the Western and Gulf State proxy terror campaign.

Do you think the US would have been doing anything less if the tables had been turned… like running a full blown covert operation to discredit the Putin regime, or maybe, heaven forbid, running a proxy terror war in Chechnya like we did?  Putin took that real cool. He won that brutal war. That was his payback.

Does anyone remember the Russians responding with a similar terror war here in the States? Was Russia charged with 9-11?… and did I miss that somehow — the ET boys maybe erasing that part of my memory banks, and yours, too?

The Theater of the Absurd continued this past week as a three ring circus. Corporate media pretends it has not been outed as the alter ego of Wikileaks, where it is now exposed as the Fort Knox of Fake News. The last gasp was Aleppo, where all the Western media massacre lies came tumbling down like the walls of Jericho.

Those most guilty are now throwing the Fake News term around at everyone in Alternate media so they can escape from their own sins in all the confusion. The play there is that if everybody does it, then no one takes the big hit for doing it. It is our job as journalists, editors, private Intel and independent publishers to now make sure they do not get away with it.

The public faith in the integrity of media was already low, but I can’t wait to see the new polls for 2017. Unfortunately the low public trust ratings have not really changed anything.

No media heads have resigned and we have had no strikes, reporter walk-outs, or open letters signed by the deans of the nation’s journalism schools, and I don’t expect any. Color me disappointed.

This public “faking it disease” has shown up in the Senate hearings for Trump’s top administration people last week. The Left is showing it is still taking drugs, and in full theater mode, using actors hired to dress up as Ku Klux Klansmen and be carried out of the hearing on Senator Session’s confirmation for Attorney General. And yes, the KKK imposters got lots of photos and news coverage, an old form of fake news.

The word seems to have gone out that General Mattis would prefer not to be referred to by his military nickname “mad-dog” any more, and I can sympathize with the man. He put on an odd hearing performance, where he feigned opposition to Trump’s foreign policy with this surprise, “I would consider the principle threats to start with Russia.” The problem with that is the Secretary of Defense does not make policy. He carries it out, and if he doesn’t want to, he resigns. The general and the Senators all knew this.

Mattis wants to get confirmed, but he has an extra hurdle to obtain the waiver for his under seven year waiting period before re-entering government service. So he schmoozed the Senators with his claim that the New World Order was “under its biggest attack since World War II, from Russia, terrorist groups, and China’s actions in the South China Sea.”

This statement was “Yellow Government” at its worst. With these choice words the General brushed aside the Cuban missile crisis, the Vietnam War, several Mideast wars with Israel, the USS Liberty, and so much more.

He ignored all the tremendous arms agreement progress we had made with Ronald Reagan, especially in nuclear weapons, until George Bush (43) took the US out of the Anti-ballistic missile treaty in 2001. Bush said then, “My decision to withdraw from the treaty will not, in any way, undermine our new relationship or Russian security.” 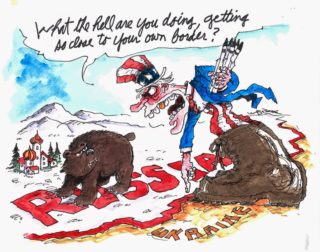 “My dear General Mattis, I know you are aware of the extensive use of proxy terrorists by the US as part of its regime change tool kit, and you also know that the US broke faith with Russia in the post 9-11 period, when the world’s nations poured out their sympathy for the 9-11 attacks.

Putin and Bush stood together in the fight against international terrorism until America went over to the dark side, including the eight years under Obama.

And I assume that you are aware of the Sandia National Labs report conclusion that all three World Trade Towers were brought down by mini-nukes placed in the basements; the nukes had been specifically designed to bring large buildings down in their footprint with as little collateral damage as possible.

Yet you and your uniform class did nothing but swallow the cheap cover story. The real perpetrators of 9-11 are still walking around as free men, and our military is now advancing to the Russian border.”

Who holds the Gold Medal for Regime Change?

The US has 750 post Cold War overseas bases, but when China puts a few up on some tiny reclaimed islands in the South China Sea to counter our Navy’s “floating bases”, Mattis calls Russia, China and Iran major threats. Hell, all we did to Iran is steal the whole country and have the Shah milk it dry. What reason could they possibly have to not love America?

The good general knows that Russia’s military expenditures are a small fraction of ours, which limits Moscow to remaining in a completely defensive posture. That of course requires having a strong deterrent to America’s first strike policy, which is a blank check to attack any country it wants to, for any reason. The language clearly states this, done under a Democrat administration.

No other country has a first strike policy like this. Many feel this clearly makes the US the biggest threat to everyone else on the planet, which is exactly what our first strike policy was changed to convey. The countries destroyed by proxy terrorism over the last several years were just “examples” for others to see. The jihadi version of this was to chop off the heads of their prisoners or burn them alive, but we just cut of the head of a country’s independence.

I used the term “yellow government”, borrowed from the familiar journalistic one, because of the cruel twisting of meanings used by our government. Justifying the use of proxy terrorists to “defend our interests” is one such example. General Mattis telegraphed that he is on board the program by listing Russia as the number one threat simply because Moscow can defend itself.

“Exceptional America” now deems any country that cannot be military dominated to be a threat – period, but under international law all countries have a right to self-defense and to retaliate against aggression, like a pre-emptive strike.

The Democrats have the Yellow Government disease themselves. They are up in arms over Russia’s alleged influence on the US election, even though Hillary’s own campaign people “hacked” Bernie Sanders out of the race via secret machinations within the supposedly “non-partisan” Democratic National Committee.

The Republicans are angry because the public chose a candidate who was “none of the above”, showing they were sick and tired of being lied to and exploited by our professional political class. The current NeoCon bunch in Congress form the Yellow Government cheerleaders, waving the Russophobia flag, led by John McCain from the mob state of Arizona, and Lindsey Graham from South Carolina.

All of them know that the US overthrew the elected Mosaddegh government of Iran in 1953, compliments of Kermit Roosevelt and the CIA, stealing the country via its puppet the Shah until its later Revolution. I knew Kennett Love well, the New York Times Mideast correspondent in Iran at the time, who had a front row seat on the whole affair. He gave me 8 hours of interview footage covering that period of his life.

Sadly, that regime change template became the dark side of America unexceptionalism, where we funded opposition parties galore, rigged elections and assassinated where needed when the former options were not working.

Patrick Lawrence in his The Nation commentary came to a similar conclusion, but from a different direction. He said,

“Most of us will do more or less anything just now to avoid taking a cold, hard look at ourselves and what it is we are up to… for we display a striking unity in our tendency to blame others for our difficulties, shortcomings, and failures, of which there are unusually many at this moment—every one our own doing.”

I will close with one of my often used lines, but one that fits here perfectly. “Never has so little been owed by so many to so few, as to our current governing class of pretenders and scamsters.”