One can historically say that the current presidential inauguration has been somewhat unique. It has indeed generated violent reactions in Washington and elsewhere. Madonna has recently come out of the woodwork and declared: “I’m angry. Yes, I am outraged. Yes, I have thought an awful lot about blowing up the White House.”

Obviously some psychopaths were listening to Madonna’s potent message. They smashed windows and vandalized cars.[1] It has been reported that at least 217 people have been arrested, and areas of downtown Washington has been damaged. Long before the debacle, Michael Moore was already calling for “disruption” during the inauguration.[2]

Is this how you treat your presumed enemy? Does it really help to go out on the streets and act like wild animals? Nonviolent protest is of course legitimate, but smashing cars and windows?

As we have argued in the past, Trump is indeed inconsistent when it comes to Israel. In fact, Trump hasn’t really fleshed out a consistent foreign policy.

But violent protesters are doing a disservice to all Americans and to their own cause by appealing to vandalism to get things done. They seem to forget that the entire world is watching them.

This also shows that there is no such thing as “diversity.” Madonna talks about choosing “love” instead of “hate,” but she can never love her enemy because this is not part of her ideology.

Then it was Scarlett Johansson’s turn to jump on the political bandwagon. “‘Have you been to the gynecologist yet?’ That was the question my mom asked me at 15 when I informed her about a change that I noticed in my body,” Johansson declared.

“I’m not the type to divulge facts about my personal life, but I feel that in the face of this current political climate, it is vital that we all make it our mission to get really, really personal. So, yes, at 15, I had been to a gynecologist.”

She didn’t stop there:

“I was living in New York City and had visited a Planned Parenthood there. It was actually my clinician at Planned Parenthood who suggested I speak with my pediatrician if I was seeking a referral. She was compassionate and professional and told me she was happy to treat me for regular checkups, and when the time came, for STD and cancer screenings. No judgment. No questions asked. Planned Parenthood provided a safe place where I could be treated with gentle guidance.”

In other words, she had an abortion. But let us start and think about this for a moment. If Johansson’s mother took the same route, would she be able to make those statements today? That perennial puzzle has never been answered in a logical manner because the ideological foundation of the abortion issue is morally and intellectually bankrupt.

What people like Johannsson don’t usually understand is that Planned Parenthood was created by Margaret Sanger specifically to depopulate the earth, most specifically by eliminating the “imbeciles,” namely, blacks and Catholics.

It must also bes said that abortion is a sanitized version of eugenics, an ideology which started by a sizable number of British intellectuals and which quickly got spread like a virus in America with serious political consequences.[3]

Margaret Sanger made it very clear in her book Pivot of Civilization that “the most urgent problem today is how to limit and discourage the over-fertility of the mentally and physically defective [and that] possibly drastic and Spartan methods may be forced upon American society if it continues complacently to encourage the chance and chaotic breeding that has resulted from our stupid, cruel sentimentalism.”[4] Sanger again declared:

“The mass of Negroes, particularly in the South, still breed carelessly and disastrously, with the result that the increase among Negroes, even more than among whites, is from that portion of the population least intelligent and fit, and least able to rear children properly.”[5]

Where is Black Lives Matter when you really need them? Where are puppets and racketeers like Al Sharpton and Jesse Jackson? 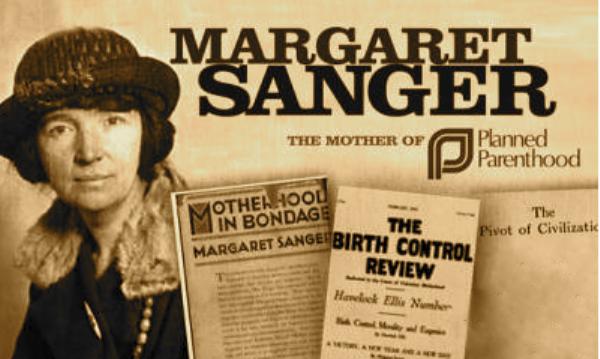 Sanger was heavily influenced by Social Darwinism. She took that ideology and spread it through Planned Parenthood and her sterilization program. Throughout much of her life, Sanger sought to find a black minister who would understand the sterilization process. She wrote,

“What I wish to see is the employment of an up and doing modern minister, colored, and up and doing modern colored medical man, both to come to New York and train at the Clinic [her clinic] and at the [International Planned Parenthood] Federation until they are oozing with birth control as well as population.”[6]

This black minister would spread her ideology “as to our ideals and the goal that we hope to reach.”[7] Sanger got what she was looking for in 1929 when a black social worker by the name of James H. Hubert, executive secretary of New York’s Urban League, answered Sanger’s call. Historian Cathy Moran Hajo writes,

“Opened in February 1930 with the backing of Harlem’s elite, the branch clinic had its own fifteen-member advisory board of African American doctors, clergymen, nurses, journalists, and social workers who advised and promoted the clinic.

“The clinic was publicized in the African American press, in the pulpits of some of Harlem’s most respected churches, and through medical channels.

“Sanger funded the clinic through grants from the Chicago-based Julius Rosenwald Fund and the donations of other white donors.

“The Harlem Branch treated 1,737 patients in its first year, about half of them African Americans. Sanger continued funding the branch, asking its advisory council to focus on ways of increasing black attendance.”[8]

Central to Sanger’s entire weltanschauung is the elimination of the moral order. She wrote again:

“Slowly but surely we are breaking down the taboos that surround sex; but we are breaking them down out of sheer necessity. The codes that have surrounded sexual behavior in the so-called Christian communities, the teachings of the churches concerning chastity and sexual purity, the prohibitions of the laws, and the hypocritical conventions of society, have all demonstrated their failure as safeguards against the chaos produced and the havoc wrought by the failure to recognize sex as a driving force in human nature—as great as, if indeed not greater than, hunger.”[9]

Since this was the case, then it was ideologically permissible for Sanger to get involved in multiple sexual relationships with a wide-range of people, including Havelock Ellis, Lorenzo Portet, Jonah Goldstein, Hugh de Selincourt, J. Noah Slee, H. G. Wells, Herbert Simonds, Harold Child, Angus MacDonald, Hobson Pitman, etc.

But that is not the end. Biographer Madeline Gray writes that “Margaret was seeking poise and surcease from her recurrent depression through astrology, numerology, sex, religious cults, and friends. No wonder, despite all the talk of her twinkling laughter, most of the pictures of her taken after 1925 reveal her as sad.”[10]

“We must teach men the overwhelming power of this radiant force…Through sex, mankind may attain the great spiritual illumination which will transform the world, which will light up the only path to an earthly paradise. So must we necessarily and inevitably conceive of sex-expression?”[11]

Aleister Crowley died too soon. He almost certainly would have been pleased to honor Sanger for her work. About children, Sanger wrote: “The most merciful thing a large family can do to one of its infant members is to kill it.”[12]

Once again, Sanger would not have been able to make such a bold statement if her own mother applied the same formula. Was it good or bad that she didn’t? If the answer is that it was good that her mother decided to nurture her, then didn’t Sanger give other babies a chance to live?

Sanger applied essentially Darwinian principles to get her dirty work done, but the laughable thing is that Darwin’s intellectual children are now complaining that they need more babies for the next generation. One needn’t be an intellectual to see that this is really dumb.