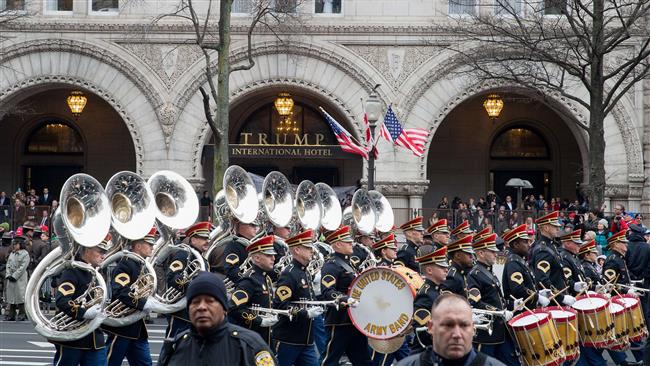 An ethics watchdog has lodged a formal complaint with the federal government against US President Donald Trump over a lease on his Washington, DC hotel.

The Trump International Hotel in Washington is located on federal property and operates under a 2003 deal with the General Services Administration (GSA) that leased the space to Trump for 60 years.

The president owns three quarters of the lease but the paperwork explicitly forbids any elected official from holding the lease or benefiting from it.

Citizens for Responsibility and Ethics in Washington (CREW) filed the complaint Friday with the GSA, urging the federal agency to terminate the contract.

The group demanded the GSA declare that Trump was in violation of the $180 million lease the moment he was sworn in as president.

“The lease bans elected officials from benefiting to avoid conflicts of interest with their duties. We know Trump likes to renegotiate contracts for better deals. If that happened here, it will be the president negotiating against the government he leads. His best interests are not the same as those of the American tax payer,” said CREW executive director Noah Bookbinder.

In other words, Trump has effectively become both the tenant and the owner of the hotel since taking office on Friday.

The lease could put the president in breach of another Constitutional clause meant to thwart foreign influence on US politics.

CREW warned that foreign diplomats could rent out space in the hotel in order to curry favor with the president or rub shoulders with his adult children who are now in charge of his business transactions.

Congressional Democrats raised the issue before Friday’s inauguration, demanding to know what the GSA planned to do to with the hotel.

Trump’s lawyer said earlier this month the president would not be divesting from any of his investments.