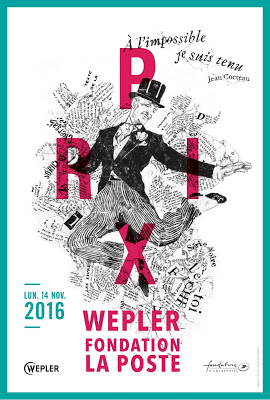 internet, people enjoy reading novels in print as evidenced by the large turnout for this annual literary event  There was standing room only as guests watched the entertainment and then the announcement of the prizes.

The literary prize called Le PrixWepler Fondation de la Poste celebrated its 19th year on November 14, 2016. Brasserie Wepler, a brasserie here in Paris famous for its seafood and oysters, located at 14 rue de la Place Clichy, near Montmartre has been hosting the Prix since its beginning in 1998. The restaurant, which started out as a lemonade stand, over a hundred years old was a place where famous authors such as Céline, Max Jacob and Henry Miller met for dining and conversation.

Each year authors whose works are not well-known and not written for commercial purposes compete for the prize. Brasserie Wepler closes its doors to customers to host an elegant soirée. Michele Bessière also provides delicious food and beverages to those in attendance.

Le Prix Wepler Fondation de la Poste was the idea of Marie-Rose Guarniéri owner of the bookshop La Librarie des Abesses in Montmartre. In 1998 she organized the prize and event with the Fondation de la Poste, an organization of the post office and Wepler Restaurant whose owner is Michèle Bressière. When the organizers created the prize their objective was to promote authors whose innovative works were not written mainly for profit. The jury changes each year to get new opinions.

As is the custom, twelve finalists are selected. One wins the first prize and is given a check for 10,000 Euros. The winner’s editor agrees to put a national banner and advertisement of the book and the prize in the literary pages of a large French newspaper. The prize for honorable mention is a check for 3000 Marie-Rose Guarniéri thanked those who helped her this year: Damien Laval -press agent, Florence Robert ,   Elizabeth Joel, the judges who read the books and Olivia Goudad and Pauline Pierre – her book sellers. She also thanked Michèle Bressière from Wepler and those at the Fondation de la Presse.

The winner of the Le Prix  Wepler Fondation de la Poste was Stéphane Audeguy for his book “ Histoire du Lion Personne”  in English ” History of a Lion named Person ”published by Seuil.  He said he  was extremely happy to receive the prize. He then mentioned that for the first time in literary prize history two novels about animals won the prize in successive years. Pierre Senges won the prize the previous year for  his book “ Achab” which was  inspired by the story of Moby Dick.  Then the audience laughed as he imagined what animal book would win the prize the next year.Would it be a cat,  weasel  or a little rabbit?  Stéphane  Audeguy said it takes courage to write.   As a writer he thought about what would Africa say if it had a voice and also what would be the life of a lion if it could tell us.

The story of the novel about the friendship between a lion named Personne and a dog named Hercule.  Again the crowd at Wepler laughed when  Stéphane said he would have liked to ask the lion named Personne to come to the literary prize ceremony but you know how lions are.  One can not count on them as they are chasers.

In the beginning Stéphane Audegay  thought about this  “Histoire du Lion Personne” as a book for children but then he revised  the book to appeal to former children called adults. 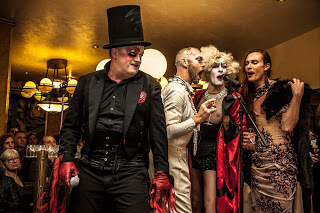 The Honorable Mention  Prize  was won by Ali Zamir for his book “Anguille sous roche” in  English “  Something  Fishy”published by Tripode.  Ali Zamir thanked the Fondation de laPoste, Brassierie  Wepler and the bookstore owned by Marie- Rose Guarniéri  called La Librarie des Abbesses. Then he explained that he wanted to write about our world which is singularly tragic and tragically singuar,   He said that there has to be literature to show that only the opening of spirit can save us,  Everyone fears each other and so the word needs liberty,“Anguille sous roche” deals with liberty, passion,selfishness and misery, He said that there are problems of the destittute; minorities, women and children. He wrote not to solve the problems but to get people to open up one to another.

These literary prizes are available in many bookstores in France including La  Librairie des Abbesses  in Montmartre.

After the literary prize winners made their speeches we enjoyed the delicious food offered by Brazzerie Wepler. Then a great DJ played dance music and we enjoyed dancing.

It was a great celebration of Prix Wepler Fondation de la Poste.