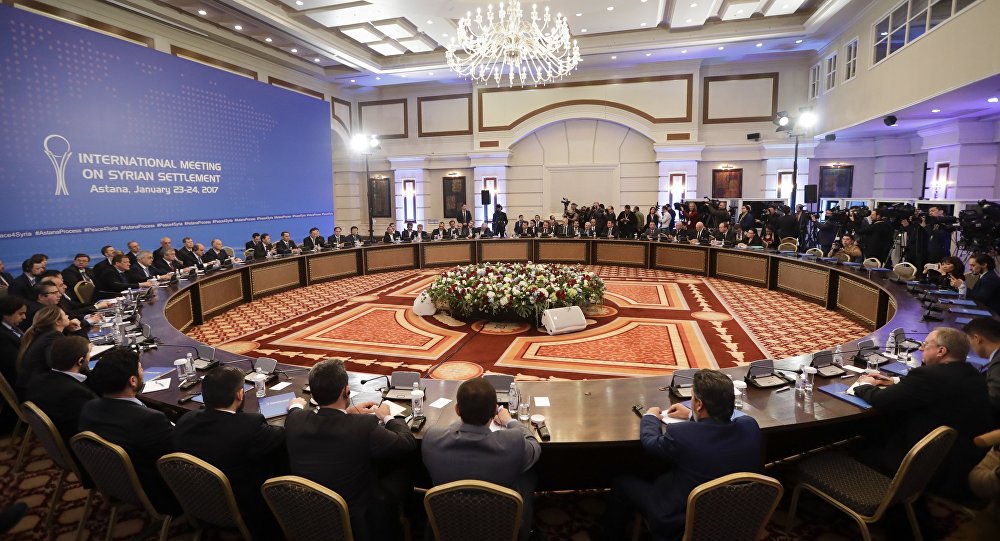 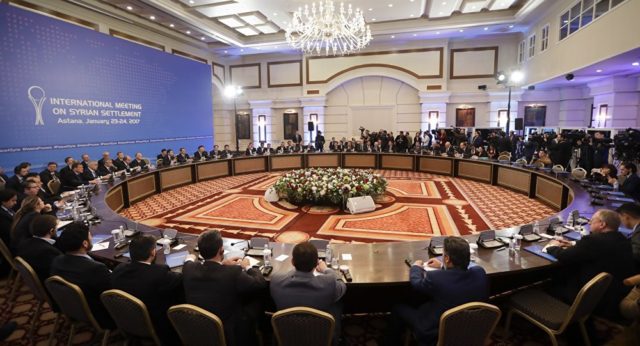 [ Editor’s Note: There is an old saying, “The difficult we do today, and the impossible…tomorrow.” There were many naysayers to these Astana talks — their position being that nothing could really be done without the “big boys” at the table, as they would not have to go along with anything decided at Astana. They were wrong.

Actually, just the opposite happened. Because they were not there, though some of their proxies were, the meeting accomplished its two well-prepared goals, to solidify the ceasefire and and confirm its monitoring and mediation under the tripartite group of Russia, Iran and Turkey.

For the first time, the armed opposition and the Assad government sat in the same room together, even if leeringly so. The High Negotiating Committees’s (HNC) Mr. Alloush did blow off some steam, making some charges for quotable material for its fighters; but he agreed to accept the Tripartite ceasefire mediation, his ticket for going to the Geneva political talks meeting in February.

In return, Syria’s Ja’afari stated that it was difficult to sit in the same room with terrorist opposition groups who had killed so many Syrians, but ending the conflict required such engagement. This Astana meeting finally accomplished the diplomatic separation of the armed opposition groups from IS and al Nusra, something the US had failed to do. Whether this can be transmitted to the battlefield remains to be seen. But the opposition groups have some diplomatic skin in the game now, and it is hoped they will not want to lose that status.

Qatar and Saudi Arabia, who are supporting the Islamic State and al Nusra, were boycotted. The new Trump administration will now work its way into the process, where Trump has stated he is open to a new joint anti-terrorism effort with Russia, which will bring Syria and Iran and Turkey with it.

The bottom line, which no one can take away, is that the Syrian coalition has killed more terrorists, and inflicted more damage on them than everyone else put together, a fact that Western media will not touch with a ten foot pole. Putin had utilized and adapted an ole WWI American term, “It’s better to kill them over there.”

And as the Mosul battle continues on now to clear the Western part of the city, the question will arise as to the surviving hardcore Mosul jihadis being left an escape route to the West, simply to be redeployed by the Saudis, Qatar and the US into possibly the Deir Ezzur area to control the Syrian-Saudi Arabian border during the continuing peace talks… Jim W. Dean ]

The talks on the Syrian peace process concluded in Kazakhstan on Tuesday, with the three guarantor countries – Russia, Turkey and Iran – issuing a joint statement establishing trilateral support for the Syrian ceasefire and paving the way for the Geneva talks due February 8.
–

Russia, Iran and Turkey have announced they will establish a trilateral mechanism to support the ceasefire in Syria. In a joint statement issued at the end of talks in the Kazakh capital, Astana, they said the Syrian opposition had agreed to take part in peace talks on the issue set for Geneva, Switzerland.

“The delegations of the Islamic Republic of Iran, the Russian Federation and the Republic of Turkey …support launching the talks between the Government of the Syrian Arab Republic and the armed opposition in Astana on January 23-24, 2017,” said a joint statement on Tuesday.

Moscow, Tehran and Ankara “express their conviction that there is no military solution to the Syrian conflict and that it can only be solved though a political process.”

The sides also agreed to jointly fight terrorists from Islamic State (IS, formerly ISIS/ISIL), which alongside Jabhat Fateh al-Sham (formerly Al-Nusra Front) was not included in the negotiations. The trio suggested separating terrorists from Syrian armed opposition groups, and welcomed the implementation of UN Security Council Resolution 2254 on the Syrian crisis, which was adopted in December 2015.

Russia, Iran and Turkey said that they support the willingness of the armed opposition groups to take part in the next round of talks, which are scheduled for February 8 in Geneva.

The head of the Russian delegation in Astana, Aleksandr Lavrentiev, said that the trilateral operative group to monitor the ceasefire will start work in February. He added that representatives of the armed opposition groups would be invited to work together with the group.

Speaking about the monitoring mechanism, Lavrentiev said that Russia does not make distinctions as to which side violated the ceasefire and said that both sides have breached the truce. At the same time, he stressed the importance of prompt verification about the violations and added that many reports on such issues are fabricated.

Syrian Ambassador to the UN Bashar Jaafari told reporters it was “extremely painful” for the Damascus delegation to sit in the same room as Syrian armed groups “who committed terrorist acts.” He added that it was not the first time they had met, and that the government had to take the step for the sake of the Syrian people.

Jaafari said that he viewed the role of Turkey in the Syrian ceasefire as negative, but had to agree to cooperate to facilitate the peace process. “In politics sometimes we have to deal with enemies to save your country, and this is what we do,” he said.

Jaafari called the negotiations “a success” and expressed support for the joint statement earlier issued by Moscow, Tehran and Ankara.

“Finally we have a consensual paper [the joint statement] agreed upon by everybody,” he said.

Answering a reporter’s question, he said that the Syrian government would continue its operation in the Wadi Barada area in the Damascus Countryside Province, as long as the people in the capital remain deprived of water.

Water from the pumping station at Ain al-Fijah in the Wadi Barada area was cut by the Damascus Water Authority in late December, after it said militants had contaminated the source, the Barada River, with diesel fuel. As a result, more than 5 million people have been without water for over two weeks.

Mohammed Alloush, leader of the Jaysh al-Islam militants, who headed the delegation of the Syrian armed opposition at the Astana talks, said the rebels support a political solution based on UN auspices, while demanding the resignation of Syrian President Bashar Assad.

Alloush added, however, that the Syrian opposition would not engage in any talks with Iran and would not accept any statement by Tehran on Syria’s future. He said that he had given a proposal to Russia on the ceasefire, and expects an answer within a week.

Staffan de Mistura, the UN and Arab League Envoy to Syria, told reporters that the UN commends Russia, Iran and Turkey for deciding to establish a mechanism to monitor the ceasefire in Syria. He underlined the uniqueness of the talks, saying that it was “probably the first time” since the start of the civil war that Syrian armed opposition groups had sat in the same room as the government.

“It has required political courage from them to sit in the same room and listen to their respective demands,” he said.

The envoy said he hopes that the political process will continue in Geneva. The only way for peace to come to Syria is through a political solution brought about through intra-Syrian negotiations under the aegis of the UN, he concluded.

“We cannot allow another ceasefire to dissolve because of a lack of a political process. Now is the time for the international community in all its dimensions to come together and support one integrated political negotiating process, as provided for in [UN Security Council Resolution] SCR 2254.”