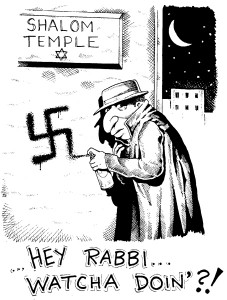 You just can’t make this stuff up. Daniel Sugarman has accused Richard Nixon of being an anti-Semite because Nixon has said some uncomfortable things.

Sugarman begins his article by saying that Nixon’s entourage was overwhelmingly Jewish. “His Secretary of State, Henry Kissinger, was Jewish. Leonard Garment, his White House counsel, was Jewish. Nixon speech-writers William Safire and Ben Stein were both Jewish.”

“During the Yom Kippur war, when Israel’s future was at its bleakest, it was Nixon who went to Congress and asked them to sign off on emergency aid to the Jewish state. It was Nixon who organised an airlift to provide desperately needed supplies to Israel, a decision that reportedly moved a beleaguered Golda Meir to tears when she first heard it would happen.

“The Gulf states pressured America to back down in its support of Israel; first by initiating steep oil-price rises, then by subsequently announcing a complete boycott on oil sales to the United States. Despite soaring fuel prices, Nixon didn’t cave in; the airlifts continued.”[1]

But Daniel adds that Nixon was an anti-Semite because of the following assertion. “Most Jews are disloyal,” Nixon said. “Generally speaking, you can’t trust the bastards. They turn on you.”[2] Sugarman again quotes Nixon saying: “No Jews. Is that clear? We’ve got enough Jews. Now if you find some Jew that I think is great, put him on there.”[3]

What are the contexts? Well, Sugarman doesn’t say. According to him, Nixon had an abiding or dying hatred of Jews. You see, Sugarman cannot explain why Nixon would hire so many Jews in his administration because it would ruin his ideological enterprise. If he actually gives the context in which Nixon’s words were uttered, then the argument is over.

Has the state of Israel turned on America even before Nixon took office? Does Sugarman forget the Lavon Affair in 1954? Or what about the deliberate bombing of the USS Liberty in the summer of 1967?[4]

Back in 2010, I happened to do a quick interview with retired U.S. Navel Officer James N. Ennes, author of Assault on the Liberty, and one of the crew members aboard the ship at the time of the attack. His assessment was that the Israelis knew exactly what they were doing and that the US government have covered this up because it challenged the unconditional support for Israel. Some writers are now saying that the attack almost caused World War III.[5]

Sugarman couldn’t just say that Nixon was wrong or mistaken. He has to say that he was an anti-Semite because Sugarman has obviously figured out that this is the best way to silence constructive criticism.

But let us grant Sugarman the silly idea that Nixon was actually an anti-Semite. Will he condemn Benjamin Netanyahu for saying things like Palestinians are like “wild beasts”? Will he come out and declare that Prime Minister Yitzhak Shamir was wrong for putting the Palestinians and “grasshoppers” on equal footing?

What about Rabbi Yitzak Shapira, who declared in his 230-page book that “Non-Jews have no compassion by nature and should be killed, in order to limit their tendencies”?[6]

Winston Churchill, a thoroughly Zionist puppet, declared back in 1928 that the Bolshevik Revolution was overwhelmingly Jewish and diabolical. “It would almost seem as if the gospel of Christ and the gospel of Antichrist were destined to originate among the same people,” he said in his much-quoted essay “Zionism versus Bolshevism: A Struggle for the Soul of the Jewish People.”[7] Churchill continued:

“There is no need to exaggerate the part played in the creation of Bolshevism and the actual bringing about of the Russian Revolution by these international and for the most part atheistical Jews. It is certainly a very great one; it probably outweighs all others.

“The same evil prominence was obtained by Jews in the brief period of terror during which Bela Kun ruled in Hungary. The same phenomenon has been presented in Germany (especially in Bavaria), so far as this madness has been allowed to prey upon the temporary prostration of the German people.

“Although in all these countries there are many non-Jews every whit as bad as the worst of the Jewish revolutionaries, the part played by the latter in proportion to their numbers in the population is astonishing.”[8]

Was Churchill an anti-Semite? Why can’t Sugarman define what he means by anti-Semitism? Is Jewish scholar Norman Finkelstein an anti-Semite for saying that Benjamin Netanyahu is a maniac?[9]

You see, Sugarman cannot wrestle with these questions and answer them in a rational way because that would kill his entire ideology. The good news is that people everywhere are waking up. They are no longer falling in to this anti-Semitism trap. In fact, Zionism has already received a devastating blow all across the world.

[7] Winston Churchill, “Zionism versus Bolshevism: A Struggle for the Soul of the Jewish People,” Illustrated Sunday Herald, February 8, 1920.

[9] For a scholarly study on the abuse of anti-Semitism, see Norman Finkelstein, Beyond Chutzpah: On the Misuse of Anti-Semitism and the Abuse of History (Berkeley: University of California Press, 2005).