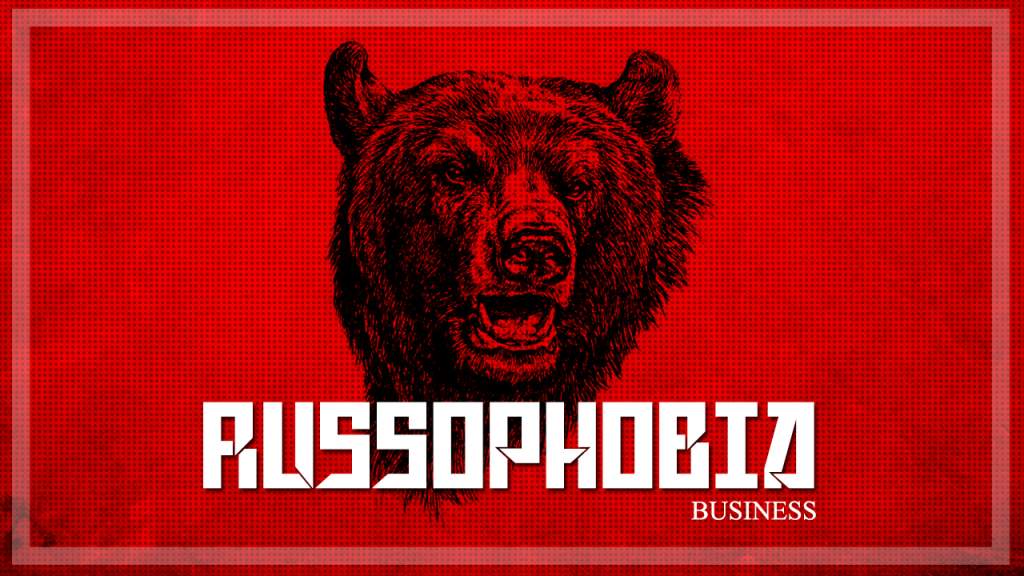 One of the features of the escalating global confrontation was the increase in Russophobia, in the form of accusations leveled at Russia that it’s invading Ukraine, shooting down airliners, committing atrocities in Syria, hacking US elections, sponsoring alt-Right and Euroskeptic movements, and weaponizing giant squid.

No conspiracy theory involving Russia seems too outlandish to be rejected by the so-called “respectable” mainstream media. This is true across a broad swath of countries, starting with Ukraine and the Baltics, ending with the United States, with the non-Western world looking at this performance in amazement. What are the origins of this campaign, and what is it hoped to accomplish?

The answer depends on the country in question, because while this campaign may appear to be a manifestation of Western unity, in actuality it reveals deep divisions within the Atlanticist alliance as the motives for Russophobic propaganda vary.

Let’s start with the United States, United Kingdom, and Canada. Here the motive is prosaic economic self-interest. US and Canada are major hydrocarbon producers whose “liberal” Obama and Trudeau governments have been seeking to isolate Russia in order to eliminate the competition from Russian hydrocarbon exports. US oil and gas companies would furthermore benefit from the construction of pipelines linking Saudi Arabia and Qatar with Europe, but that project first requires the destruction of Syria which Russia successfully opposes.

Finally, the Obama Administration has been pursuing regime change in Russia itself in order to make that country “available” to US financial and energy interests. The fever pitch that the anti-Russian propaganda campaign reached in recent weeks is a reflection of Russia’s success at deflecting these threats. However, the US foreign policy would change dramatically in case of revaluation of threats from China, non-government actors like ISIS and a possible global economic crisis that will force reformatting of the global economic system.

France has also embraced Russophobia as official state policy largely because it is seeking to reclaim its own empire in North Africa and the Middle East. Just as Nicholas Sarkozy was a key driver of the overthrow of Libya’s government alongside Hillary Clinton, so does Francois Hollande want to do the same in Syria.

The recent dimming of the Eiffel Tower lights, ostensibly a sign of sympathy with the people of Aleppo, is as much a reflection of France’s rapacity toward Syria as it is of its powerlessness to do anything positive to influence the events there. To the extent that, again, Russia is key in thwarting French imperial ambitions, France has found common cause with other countries which embraced Russophobia at the official level even though its interests don’t really overlap with them.

Germany’s Russophobia, which now includes allegations that Russia may hack German elections and even that Syria and Russia could promote migrant sex crimes in Germany in order to engineer Angela Merkel’s elections defeat, is an ideology in the service of German mercantilism. EU’s crisis and austerity policies force German business to find new markets to replace the depressed markets of Southern Europe, and EU’s eastern flank represents practically the only available outlet for economic expansion.

In order to realize the dream of NEO-Lebensraum reinvented as Eastern Partnership, Germany must find a way to neutralize Russian influence in, and economic ties with, countries like Ukraine and the Baltics, to ensure that German influence fills that void. The idea of regime change in Moscow, which was to be the next domino to fall after the Maidan coup in Kiev, enjoys quiet support among Germany’s current leadership for the same economic reasons.

This expansion is all the more urgent due to the economic collapse of Greece, Italy, and Spain, whose debt spiral has been the engine of Germany’s economic growth over the last decade. While Merkel’s support for the Maidan has been interpreted by many as a sign of her subjugation by Washington, in actuality Berlin has been Washington’s “fellow traveller” pursuing its own set of interests.

Poland’s interest in promoting Russophobia is similar to Germany’s in that its leaders, too, wish to reclaim territories lost after the 17th Century, or at the very least establish Poland’s dominion over the Baltics, Ukraine, and Belarus. In addition, since ensuring financial injections from the West continue has become the dominant theme in these countries’ politics, the effort to provoke a conflict between Russia and the West represents a clever though likely doomed strategy to force Western powers to continue subsidizing their newly found allies indefinitely.

While in the West the “Russian threat” card is played to delegitimize political opposition and to promote neo-imperial expansion, in Central Europe it has the added purpose of persuading the West to commit financial resources. Ukraine’s Maidan, with its anti-Russian rhetoric and policies represents arguably the most desperate such effort. Poland’s, Romania’s, Latvia’s, Estonia’s efforts may be more subtle but their aim is the same.

Even from this brief survey it is obvious that the various Western factions are at odds with one another, and that the only thing that united them was the perception of Russia’s vulnerability. For not only are the various members of the Western alliance pulling in very different directions, their interests are to a large extent incompatible. The destruction of Syria would naturally lead to a US-French conflict. Ukraine’s integration with the EU would lead to a clash of Polish and German interests.

The escalation of West-Russia confrontation would benefit some but hurt others. Naturally, there are strong factions lobbying for continued confrontation with Russia on the European continent outside of Central Europe, mainly within the United Kingdom and Germany.

In the case of the UK, the calculation is a relatively simple one. UK still is a major contributor to the EU budget, it does not benefit from Central Europe’s economic development except of at least partly qualified newcomers, however, it wants the EU to continue its confrontation with Russia because it would weaken or at least distract both of them, while remaining isolated from the negative consequences due to its island location and the historical position.

Germany’s current government also supports the confrontation and the implied financial commitment to Central Europe because Germany benefits from these subsidies which are often spent on German products and services. It is also no accident that Germany was so adamantly opposed to Brexit–Great Britain is one of the main donors into the EU’s budget, and its withdrawal would shift the burden of financing Central Europe on to Berlin.

It is countries like France and Italy which are most opposed to the continuation of the sanctions war with Russia because their leaders would prefer to focus on tackling internal problems, and their distance from Central Europe means they do not benefit from subsidizing the region as much as Germany does.

But in the end it was Russia’s political unity, economic resilience, and military prowess that led to these fissures in the West’s earlier unity appear and forced a painful re-examination of reality upon these countries elites. Typically, the British were the first to betray their allies, and the Brexit demonstrated the UK would rather reap the benefits of Russophobic policies than to pay the costs.

The election of Donald Trump and the evident change of the US foreign policy vector is also the reflection of the unwillingness to subsidize German, Polish, Ukrainian, and even French ambitions. France is practically guaranteed to change course after the next elections, which means Angela Merkel, assuming she survives her next election, will be able to stem the political tide.

The two big losers appear to be Poland and Ukraine whose political elites would risk civil war–even in Poland–if they attempted to restore good relations with Russia. For that reason, we can expect rogue US intelligence community elements collude with Poland and Ukraine in order to make the improvement of relations with Russia more difficult politically.