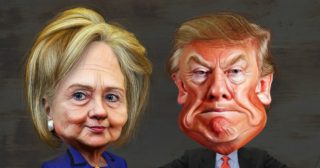 Perhaps vigilance and dissent, the responsibilities of citizenship in a democracy, have never been more crucial than at this perilous juncture in American history. Such activism will require unity and dedication if we are to counter the real and serious threat to human rights and progressive values posed by the Trump Administration and a conservative Republican Congress. But in addition to taking to the streets and making our voices heard, we must learn from the past and look to the future to ensure that the mistakes which resulted in a Trump presidency are never repeated.

While many factors probably contributed to the unexpected victory of Donald Trump, much of the blame has been attributed to the alleged hacks by the Russians and the release of the Democratic National Committee’s (DNC) and Clinton campaign officials’ emails by Wikileaks. As a consequence, allegations have been made that our democracy has been sabotaged by a malicious foreign power, a serious charge for sure, perhaps even an existential threat that should concern every American. As there is absolutely no evidence, however, that the Russians or anyone else hacked voting machines or altered voting technology, perhaps “sabotage” is a dangerous exaggeration that has unleashed a bipartisan frenzy regarding America’s appropriate retaliatory response to this “act of war.” I think even “influencing the election,” though less provocative perhaps, still exaggerates the impact of the hacking and email release. How we describe these “leaks” is not just semantics. Language is important, as it affects, perhaps even determines, how we move forward. Such inflammatory rhetoric has real world consequences as it further degrades our relationship with Russia, increases tension, and ushers in a new era of cold war (or worse). Most importantly, creating fear and paranoia of Russian intent distracts from a legitimate, meaningful inquiry into how such an unqualified, arrogant, narcissist now occupies the White House.

Testifying before the Senate Armed Services Committee on foreign cyber security threats, former Director of National Intelligence James Clapper affirmed that the intelligence community has grown more “resolute” in its assessment that Russian intelligence was involved in the hacks aimed at the DNC and Hillary Clinton’s campaign chairman John Podesta. What is, however, of greater relevance to our current predicament and to the integrity of our electoral process is, unfortunately, hardly being discussed amidst the enthusiasm of bipartisan Russian fear mongering. That is, did the release of the emails affect the outcome of the election by turning voters against Hillary Clinton and giving the presidency to a Russian sycophant; and if so how?

Since, as we’ve been told, all the “deplorables” in this country were already committed to Donald Trump, if the information allegedly hacked by the Russians and released by Wikileaks truly impacted the election, allowed Trump to win the electoral college, then it must have been by influencing the “non deplorables,” the sane and reasonable Americans, not to vote for Hillary Clinton. Certainly this information, little if any of which has yet to be adequately refuted, would not have been available were it not for the Russians and Wikileaks, but what requires clarification is how providing relevant information to voters poses a threat to our democracy. Consequently, if the hacked emails did in fact influence the outcome of the election, Trump’s victory must be attributed not to Putin, the Russian hackers, Wikileaks, or to ignorance, racism, misogyny, homophobia and xenophobia, but to the subsequent disgust and contempt of reasonable voters for the misconduct documented in the emails of the DNC and the Clinton campaign. Conduct that corrupted our electoral process and marginalized Bernie Sanders, thereby ensuring that Hillary Clinton receive her party’s nomination for president. Conduct that arguably cost the Democrats the election, and gave America and the world Donald Trump.

The Main Stream Media (MSM), the all important 4th estate, much of which supported the candidacy of Hillary Clinton, for all intents and purposes, ignored the election tampering brought to light by Wikileaks choosing rather to perpetuate the distraction of Russian interference. As an informed citizenry is, after all, necessary for a vibrant, well functioning democracy, American voters have a right to know ALL information relevant to determining for whom they will cast their ballot. The information released by Wikileaks, then, served to augment the enthusiastic reporting of the MSM of Trump’s many, many negatives. By informing the voting public about the election tampering, information that the MSM and our government lacked or refused to share, perhaps Putin, the Russians, if in fact they were behind the hacks, and Wikileaks in releasing it, deserve praise for strengthening rather than condemnation for sabotaging our democracy.

These observations in no way give Donald Trump credibility, undermine concern for the dire situation this country and the world faces as a consequence of his Presidency, or diminish the importance of demonstration and dissent. But as we struggle against the attacks on our civil liberties and progressive values by a Trump Administration, we must learn from past mistakes and ensure that this fiasco never be repeated. We must not be silenced or blinded to the corruption of those, no matter their party affiliation, race, or gender, who, in their lust for power, sabotage our democracy, undermine our electoral process, and, to distract from the criminality of their unscrupulous behavior, perpetuate a “wag the dog” scenario that brings this country and the world to the brink of nuclear war.