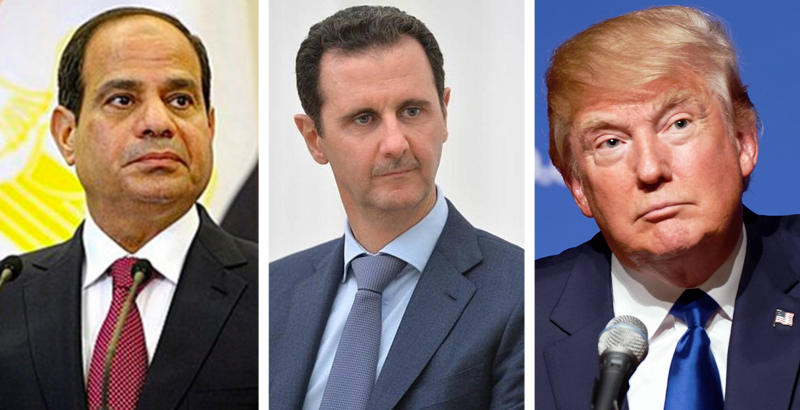 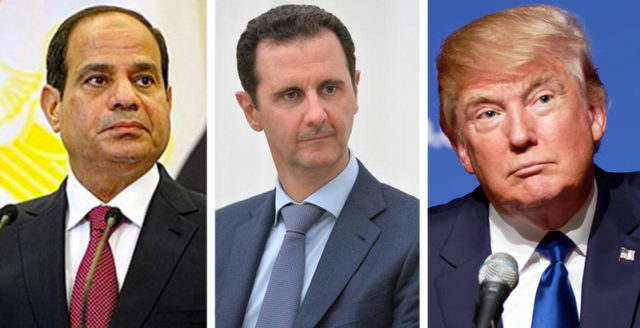 [ Editor’s Note: Trump is having a busy week, and although this report is unconfirmed, it has Trump’s fingerprints on it, having fun getting around the ban on direct contact with Assad, channeling a message through Sisi. And there was a message here for Erdogan, based on what was not said.

And the same goes for Qatar, which has been keeping a low profile during the recent Tripartite Syrian talks. It has been THE long time supporter of the Muslim brotherhood. Having them officially designated a terrorist org will put Qatar down range on the shooting gallery.

Netanyahu will have heartburn after reading about this “brave man Assad” fighting terrorism, which of course includes the Israelis. So is Trump rolling out some psyops of his own?

Bibi announced today that the new settlement announcements were “just the beginning”, and Germany was quick to denounce them, but would Merkel cancel the nuclear sub deal? Meanwhile Israeli defense minister Lieberman signals that Israel’s next conflict will be settled via total war with someone’s surrender at the end.

And last, Kuwait was meeting with Iran yesterday, wanting to kiss and make up to start putting the past Gulf hostilities behind them, while Bibi wants Trump to kill the Iran nuclear deal, which none of the other P5+1 members will do — and Boeing having a badly needed airliner deal recently signed.

Britain’s top military think tank issues a report that British armed forces would not last a day in a major conflict. You just can’t make this stuff up. What the hell is going on here?… Jim W. Dean ]

According to the newspaper, Trump promised to support the Egyptian President in the fight against terrorism, as well as stressed that the US would fight terrorism in the Middle East. Reportedly, the US President also expressed his support for the Congress’ decision to recognize the Muslim Brotherhood organization as a terrorist group.

As Addiyar reported, talking about the wars in Syria and Iraq, Trump said that Washington intends to cooperate with Moscow in order to conduct joint military operations against terrorists on the territory of the two countries, as well as to continue to provide aerial support to the Iraqi Army, fighting against terrorists of the Islamic State (IS) terrorist group there.

According to the report, Trump said that Syrian President Bashar al-Assad is a “brave man,” who remains steadfast in the face of terrorism. At the same time, US President also noted that some circumstances do not allow him to make contact with the Syrian President.

Trump added that he is going to keep in touch with Russian President Vladimir Putin in order to coordinate joint military operations against terrorists, in particular, against the IS, on the territory of the Syrian Arab Republic, and expressed confidence that Syrian terrorists would be eliminated.

As the sources told Addiyar, el-Sisi told the Syrian President about the Trump’s words, as Egyptian President had perceived the words of the US President as a message for al-Assad.

Ad-Diyar is an Arabic-language daily newspaper based in Beirut, Lebanon. In its coverage of the Syrian conflict, the newspaper has a pro-government stance.