A “star chamber” is a secret cabal given the power of life or death, an anonymous and unaccountable group that sits above government and beyond the law.

It began with the EPA when a group of nuclear power and coal industry lobbyists set a master plan into motion that is taking over agency after agency.  The public face is global warming denialism, spread by alt-right podcast hosts and bloggers.  NASA alone, now in the process of being gutted and silenced, long ago proved global warming beyond any question: 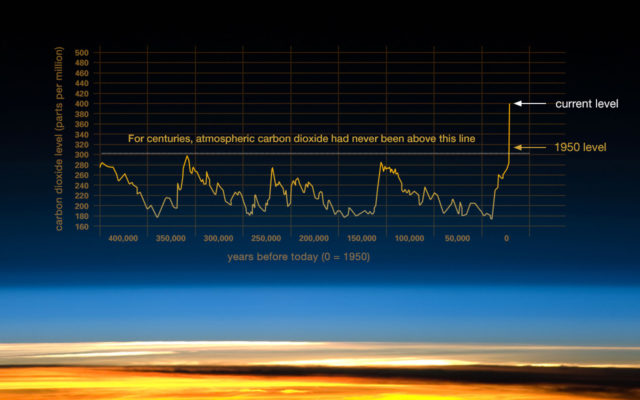 Earth-orbiting satellites and other technological advances have enabled scientists to see the big picture, collecting many different types of information about our planet and its climate on a global scale. This body of data, collected over many years, reveals the signals of a changing climate.

The heat-trapping nature of carbon dioxide and other gases was demonstrated in the mid-19th century.2 Their ability to affect the transfer of infrared energy through the atmosphere is the scientific basis of many instruments flown by NASA. There is no question that increased levels of greenhouse gases must cause the Earth to warm in response.

Ice cores drawn from Greenland, Antarctica, and tropical mountain glaciers show that the Earth’s climate responds to changes in greenhouse gas levels. They also show that in the past, large changes in climate have happened very quickly, geologically-speaking: in tens of years, not in millions or even thousands.3

Disputing NASA and every major scientific organization in the world is an orchestration of conspiracy theorists and fake news “alternative fact” types, many of whom are now flooding into Washington, many more have been there for decades, promoting destruction of the planet for payoffs from strip miners and crooked regional utilities.

The move began with orders to end all “uncleared” communications from any EPA source.  In what has been labelled a move to stop communications with social media, what has really happened is that the Trump administration has put in place a process to clear everything, including editing reports and falsifying data, in the hands of anti-environment lobbyists.

The fertilizer and pesticide lobby now controls our rivers and lakes.  Two years ago half of Ohio was without drinking water because of poor fertilizer management practices killing Lake Erie.

There will now no longer be problems with drinking water as standards for toxins will be removed entirely and nothing in food, water or air can be “legally” considered poison if it also involves profit.  This is the conservative way.

The pharmaceutical industry now controls its own oversight,  the banksters that took down the US economy in 2008 now control the SEC and FDIC, the logging industry controls our parks and forests, and the waste management, read “toxic dumping” industry will keep our harbors and shorelines clean.

Clean water, clean air, healthy food, wildlife and our parks, will all be a thing of the past.  We now live for the few, as long predicted by a wealth of science fiction literature which warned us that this day was coming.

As an afterthought, consider your cable bill or what you pay for mobile phone service.  Then think of insurance, mortgage insurance already hit by Trump, then car insurance and of course the upcoming health insurance catastrophe.

While Washington is being “de-regulated” we are already on the road to price fixing, ripoffs and hidden taxes that will crash our standard of living.