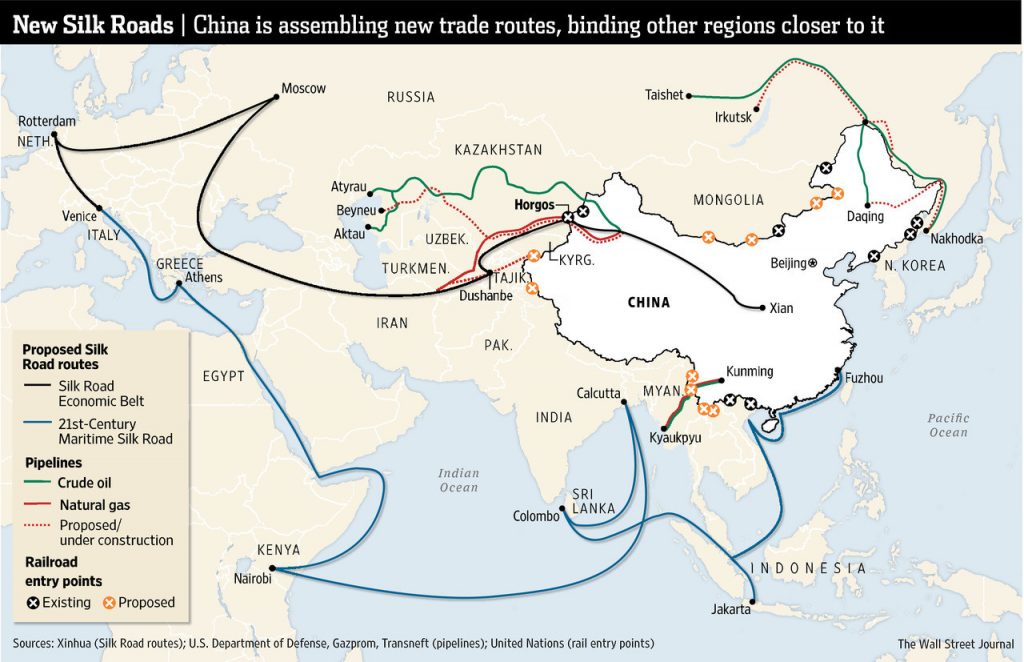 With the recent inauguration of Donald Trump as 45th president of the United States, for the first time in history, the great nations of the world have a potential to find a common spirit of understanding and outlook which provides the means to extinguish the plague of oligarchism, poverty and war both on the surface of the earth and beyond.

Since the signing of the integration treaty between Russia’s Eurasian Economic Union and China’s New Silk Road (aka: One Belt One Road) in May 2015, the two greatest forces of Eurasia have created a pro-development dynamic stronger than anything humanity has seen before. So strong in fact, that India and Pakistan have been able to move on board, becoming members of the Shanghai Cooperation Organization along with Iran, establishing great megaprojects with China linking their destinies ever more closely to the World Land bridge grand design laid out by the Schiller Institute founders Lyndon and Helga LaRouche for over 40 years.

A new hope has been felt in Syria and the greater Middle East, where due to Russian intervention and Chinese investment, the neo-con agenda for regime change has largely been thwarted, and even the Philippines and Japan have put their fates increasingly into the Eurasian development dynamic and no longer in the Anglo-American “Pivot to Asia” which called for inevitable war with China.

One would expect that with the death of the neo-con outlook heralded by the inauguration of Donald Trump, that Canada’s elite would enthusiastically applaud this new opportunity for world peace, especially considering what a valuable strategic place this great northern nation occupies as an Arctic power and serving as a bridge linking America and Russia together.

However, as the first days of 2017 unfold, the opposite has occurred.

On the 10th of January 2017, a policy coup of sorts occurred within the highest ranks of the Anglo-Canadian establishment which overthrew a policy of cooperation and dialogue with Russia, painstakingly established by Canada’s Foreign Minister Stephane Dion (Nov 2015-Jan 10, 2017). In his stead, neo-con Russo-phobe Chrystia Freeland was installed by Prime Minister Justin Trudeau, causing utter bewilderment in policy analysts such as Universite de Montreal Professor Michael J. Carley who exclaimed to Sputnik News: “This appointment is a catastrophe for Canadian-Russian relations, I cannot understand why the government would have selected her to be minister for external affairs with her stated position with respect to Russia, Crimea, and Ukraine. She’s a Russophobe, a hater of Putin, of Russian politics.[1]“

Rhodes Scholar Chrystia Freeland[2], who is intimately tied into the Ukrainian Nazi networks at the highest order both in Canada and Ukraine, is distinguished as being the first Foreign Minister in Canadian history not permitted by law to travel to Russia having received a travel ban in 2014 by Moscow due to her affiliation with not only British intelligence, but the Banderite networks running the Ukrainian coup.

Within eight days of Freeland’s installation, Dion’s Parliamentary Secretary for Foreign Affairs Pamela Goldsmith-Jones was replaced by former Lt. General Andrew Leslie, who had formerly occupied the powerful position of Chief Government Whip. The Whip’s sole role in a Parliamentary system is simply to keep all members of their Party in line with a geopolitical agenda rather than their own consciences.  Leslie’s anglophile family history extends to his grandfather Gen. Andrew McNaughton, an opponent of NAWAPA, the architect of the bloodbath at Dieppe in 1942, and close associate of MI6’s Gen. Louis Mortimer Bloomfield[3]. In fact, the only grandfather of a sitting Cabinet member as twisted as General Leslie’s which this author knows of, is Chrystia Freeland’s. Freeland’s cozy relationship with Ukrainian Nazis can only be understood by recognizing her grandfather’s vicious role as an ally of Hitler’s Ukrainian collaborator, Stephan Bandera named Michael Chomiak[4], who spent his time during the war as a darling of the SS publishing a pro-Nazi journal named Krakivski Visti, and was picked up by the CIA and imported into Canada alongside many other Banderites after the war to act as agents against the new “soviet supervillain” of the Cold War[5].

Detonating a Diplomatic Bridge Under Construction

With this cabinet reshuffle, the British-Canadian establishment has attempted to jettison over a year of diplomatic work established bilaterally between Stephane Dion and forces within the Canadian diplomatic and private sector and their Russian counterparts, to not only undo the post-March 2014 Iron Curtain imposed by former PM Stephen Harper, but also create the foundation for positive relations based upon cooperation on arctic development, terrorism, and space[6].

Dion’s work transitioned from words to tangible action when, on July 25, 2016, he broke two years of antagonism and met with Russian Foreign Minister Sergey Lavrov at the ASEAN Summit in Laos, much to the chagrin of the majority of parliamentarians of all parties including his own fellow Cabinet members. Coming out of the Summit, Dion announced a Russia-Canada Arctic Cooperation Conference to be held on November 24 bringing together representatives from both countries. Leading into the November 24 conference at Carleton University, Foreign Minister Dion gave a speech stating:

“To continue on the importance of cooperation, let’s insist on the crucial relationship that must exist between Canada and Russia. Almost 50 percent of the North is Russian, and some 25 percent is Canadian. Between us, we control 75 percent of the North. Preventing scientists from these countries from talking is illogical. Our government has put an end to this irrationality. To sever the links with Russia, our neighbor, serves the interests of no one. Neither Canadians nor Russians nor Ukrainians. No one.[7]”

Opening the Carleton Conference, the Russian Ambassador to Canada stated: “The general goal today is to show the full potential of the Arctic as a territory of dialogue and peace. People who have lived for generations in the North know there is no alternative to co-operation. For those who live on their own land, the Arctic is not the far end of the Earth, it’s not a frontier to get whatever resources you can and then leave — it’s home, a place we need to work together to improve.”

The Delusions of a Dying Empire

Ever since the 1960s, Canada’s strategic role as a component of the British Empire’s “Great Game” was assigned largely to “create counterweights” in the words of former Prime Minister Pierre Trudeau. That is to say when the geopolitical “center of gravity” shifted towards Russia, Canada slid towards a pro-American policy, and when the opposite occurred, Canada slid towards a pro-Russian policy always striving to maintain a “balance of powers”[8]. Today, the Cold War is over, and the City of London is dis-integrating as fast as the Euro. Although every attempt is being made to convince the world that Trump’s pro-Russian policy is but a ruse to break the Russia-China alliance, the reality is quite different. All three powers share a common sense of self-interest and all three powers, joined by other countries such as India, South Africa and Brazil (of the BRICS), the SCO, EEU, etc… are moving at an accelerating rate towards the adoption of the program of the World Landbridge, space exploration as the basis for political relations and Hamiltonian Credit laid out by Lyndon and Helga LaRouche over the past several decades. The full expression of LaRouche’s Four Laws[9] laid out in July 2014 is quickly being realized.

As the Euro collapses ever more rapidly, the necessity to impose the only remedy in the form of Glass-Steagall banking separation protecting legitimate assets necessary for the reproduction and stability of civilization from the hyperinflationary derivatives bubble presses as heavily as it does in America, where Trump has already made a verbal commitment to its reinstatement during his campaign (although whether or not he intends to act upon it remains unclear).

Thus as much as delusional forces within the dying British establishment wish to believe that they can use their assets in Canada to disrupt this new paradigm by seducing China with cheap resources and spitting in the face of Russia, the truth is that the emperor has no clothes. We must come to recognize that the majority of the world has moved on from an age of imperial geopolitics towards an age of “win-win” cooperation, and if we wish to have a world worth living in, both for ourselves and our posterity, then it is high time that we accept our duty to throw off the shackles of monarchy, reach out lovingly to both Russia, America, and China in welcoming the New Silk Road as it moves across Eastern Russia, through the Bering Strait, and into the Canadian Arctic on its way to uplifting and unifying all of the Americas.

In doing this, we will discover what Ambassador Darchiev said is true. The Arctic “is not the far end of the Earth, it’s not a frontier to get whatever resources you can and then leave — it’s home, a place we need to work together to improve.”

It is a home and a gateway to a new age of peace and creativity where a new culture based upon the pioneering spirit of mankind can blossom and where the dreams of Canada’s former Prime Minister John Diefenbaker for a Northern Vision can be brought to life[10] and a truly human civilization which knows no limits except those which our impoverished imaginations impose upon ourselves can be created.