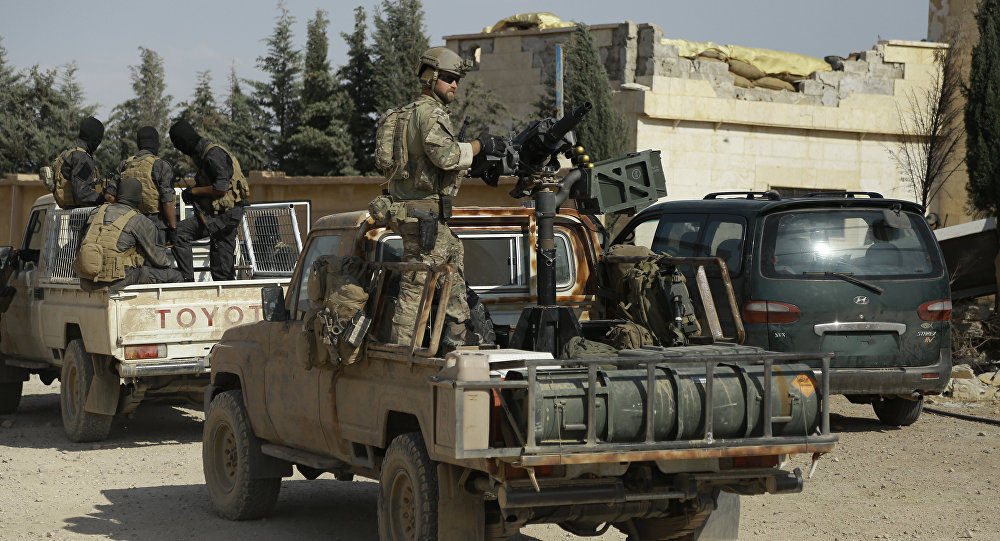 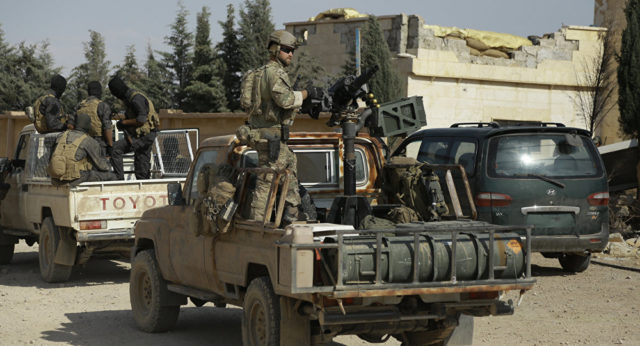 [ Editor’s Note: What a breath of fresh air to see an academic group coming forward to state the obvious, that the defender of freedom and democracy is a fraud in that it reserves the right for itself alone to overthrow other regimes. Meanwhile, Russia, which is universally against all regime change by unconstitutional means, is presented to us as a threat.

The US is not on a slippery slope there, but down at the bottom of the well, and it appears that huge segments of the population are there, too. We have seen almost no civic, religious, veteran, or academic orgs publicly stand up to speak out on this travesty.

The exceptions have been the few specific issues, like torture or the drone killings, but when it comes to the big horrors, like our first strike policy, which is a blank check to attack any country at any time for any reason we deem… our institutions have been silent. Our Founding Fathers would have been ashamed of us, and rightly so.

I would be interested in knowing what this German group thinks about the Russia sanctions and a few other things, as we have no shortage of these “fake geopolitical issues” and slogans. The most devious U.S. one is the term created, “pursuing our interests”. Gangsters and drug dealers, all criminals, “pursue their interests”, as do radical Islamic terrorists, and both Jewish and Christian jihadis for that matter.

They all give themselves a free pass while condemning others, but present themselves as morally superior while doing it. Mr. Trump is the current result of this “situational morality” taken to an extreme, as Mr. Nobel Peace Prize Obama was in his own way.

Our collective failure to do anything about 9-11 proved we were a defeated people. The Deep State has not a shred of respect for us, and why should it? We were too cognitively castrated by correct thinking to realize that if we let them get away with 9-11, there would be nothing they would fear doing to us. We threw our national security away, simply by refusing to look in the mirror and face what we needed to. Is it too late now? Trump is a strong indication that it is… Jim W. Dean ]

In contrast to the West, which has been intent on destroying Syria and other Middle Eastern countries, Russia and Iran are playing a constructive role in preventing the overthrow of Assad and the formation of a fundamentalist Sunni government in the country, a group of German academics have written in an open letter.

A group of German university professors have penned a joint statement criticizing the mainstream media’s portrayal of the roles of Russia and Iran in regulation of the Syrian conflict, Sputnik Deutschland reported.

Called “a statement on the Syrian war,” the declaration was written by the scientific advisory board of the German branch of Attac, an international organization that campaigns for alternatives to globalization.

“Russia and Iran exhausted all the possibilities for a diplomatic and peaceful solution to the conflict; (although) such an attempt seemed be futile at first, they have for the time being ended military attacks and the war in Aleppo. Therefore, we think the attacks on Russia in the mainstream media are absurd,” they wrote.

The statement, written by 14 German university professors, recalls a 2011 interview with former NATO Secretary-General Wesley Clark, who revealed that just weeks after 9/11, the US had plans to not only invade Iraq, but five countries in the Middle East.

The Pentagon published a memo describing “how we’re going to take out seven countries in five years, starting with Iraq and then Syria, Lebanon, Libya, Somalia, Sudan and then finishing off (with) Iran,” Clark revealed.

With that aim in mind, the US has been preparing the conditions for regime change in Syria since 2005, including a media propaganda campaign against the Assad government.

The US also co-operated with Saudi Arabia, Qatar and Israel in the training and funding of an army of Sunni jihadists who were supposed to overthrow the governments in Damascus and then Tehran, as investigative journalist Seymour Hersh reported in 2007.

The researchers agree with the assessment of Professor Gunter Meyer, director of the Center for Research on the Arab World (CERAW) at the University of Mainz, who told Germany’s Heute news program last month that the US bears the “main responsibility” for the Syrian crisis, and that Russia’s operation in support of the Syrian government has thwarted the US plan to overthrow the Syrian government.

“The West, in particular the USA, has provided the rebel jihadists with weapons and also partially trained them. The equipment, personnel and logistics were mainly handled by Turkey, while the financial support came mainly from Saudi Arabia and Qatar. Saudi Arabia has helped Salafist extremists to establish a radical Islamist government in Syria. Here the conquest of Aleppo in 2012 was an important step for the jihadists,” Meyer said.

“Without the military intervention of Russia in September 2015, not only would Aleppo have been completely conquered by the jihadists, but the Assad regime would also have collapsed long ago. The Assad opponents under the leadership of the US would have achieved their goal of the regime change. However, the strongest military forces would have seized power, and this would be Islamic extremists such as the al-Nusra Front, which is part of the Al-Qaeda network, and the Islamic State (Daesh), which is being combated by the international alliance under US leadership. Putin can say to people like the Israeli politicians who declared that a terrorist regime is better than Assad, that he prevented that.”

The evacuation of Aleppo was completed in December after Turkey and Russia brokered a ceasefire deal between government forces and the rebels who had controlled parts of the city since 2012.

The researchers wrote that the efforts of Moscow and Tehran to reach a diplomatic settlement to the conflict in Syria are in contrast to the “regime change” philosophy of the West, where politicians and the media have failed to acknowledge their crucial involvement.

“A few days after the evacuation of Aleppo was declared to have ended, Russia, Turkey and Iran held a meeting where they offered a guarantee that from now on the Syrian conflict would be resolved through diplomatic channels and negotiations.”

“Here, too, we must realize with bitterness that not one Western politician has taken Vladimir Putin, Hassan Rouhani and Recep Tayyip Erdogan at their word and accepted their guarantee as important and constructive. Western politicians do not seem to be able to react to these kinds of peaceful political signals.”

Unfortunately, some civilians lost their lives in the course of the anti-terror operation in Aleppo. However, the Western media failed to provide any sense of balance to their coverage.

“It must be remembered that 40,000 Iraqi civilians — at least four times as many as in Aleppo — have died since August 2014 at the hands of the US-led coalition alone, of whom 15,000 were in the region of Mosul. Since 1980 the US has attacked, occupied or bombed 14 Muslim countries,” the academics wrote.

“We find it very disturbing that the Western media, including the signatories of the anti-Russian declaration, don’t say anything about the fatal US policy of regime change in the Middle East, let alone criticize it. So-called ‘failed states’ are the obvious result of this policy, which are breeding grounds for the further spread of terrorism and the main reason for persistent flows of refugees. We ask, how blind do you really have to be to overlook a reality that is so difficult to deny?”