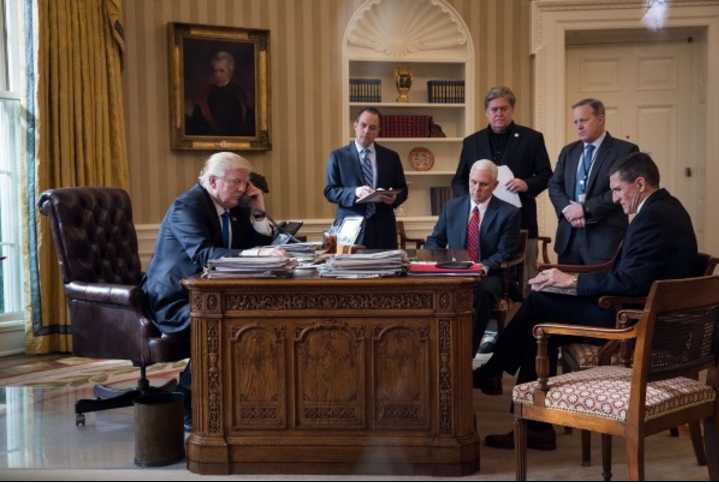 [ Editor’s Note: What the Republican establishment and most of the world thought could never really happen…did. Trump spent half the day speaking to a number of world leaders, with Vlad and the Donald being the main event.

There were no surprises, as this was a carefully orchestrated event, basically solidifying both of their previous statements, to eliminate that any were campaign fluff.

The talk was a long one, almost an hour, with lots of time for both to get into some details, none of which you will read about below.

Dear Senator McCain, you will have to find a new bogeyman now, and if you continue to hype your Russian threat hoax, I have a feeling that the chances of having your North Vietnam tapes released go way up.

For all of those standing in the photo above, regardless of what kind of big jobs they thought they might have had in the past, they learned they were in the big time now. And they also know that Putin has been there for a long time, and has more experience than all of them together. Putin’s job was to let them know that in a nice way.

This was just some stage managing for their eventual face to face meeting, where what they have decided to do will be revealed, with both wanting their stature at home elevated because of it. There is nothing on the sanctions yet, as that would be stupid. They both have to put some positive moves up on the board first.

They will pursue those that are the highest priority to get their respective publics behind them, and buy time for working the others out. People like Poroshenko or McCain will not be allowed to screw this up… Jim W. Dean ]

In their first phone conversation that lasted nearly an hour, Russian President Vladimir Putin and the new US President Donald Trump have outlined their intent to cooperate on issues ranging from defeating Islamic State to mending bilateral economic ties.

“Both sides expressed their readiness to make active joint efforts to stabilize and develop Russia-US cooperation on a constructive, equitable and mutually beneficial basis,” as well as “build up partner cooperation” on a wide range of international issues, according to a Kremlin statement following their discussion.

The White House said that the “positive” conversation was “a significant start to improving the relationship between the United States and Russia that is in need of repair.”

“Both President Trump and President Putin are hopeful that after today’s call the two sides can move quickly to tackle terrorism and other important issues of mutual concern,” the White House statement added.

“The Presidents have spoken in favor of establishing a real coordination between the US and Russian actions in order to defeat ISIS and other terrorist organizations in Syria,” the Kremlin statement said.

The two leaders also discussed the Israeli-Palestinian conflict as well as Iran’s nuclear program. “Major aspects of the Ukrainian crisis have been also touched upon,” the Kremlin announced.

The leaders of Russia and the US have noted a need to restore economic ties “to stimulate” further development of the relationship between the nations.

Putin and Trump also agreed to initiate a process to “work out possible dates and venue of their personal meeting.”

During the conversation the Presidents also expressed their desire to “maintain regular personal contacts,” the Kremlin statement said.

The Kremlin said the US President asked his Russian counterpart “to wish the Russian people happiness and prosperity” on his behalf, adding Americans “have warm feelings towards Russia and its citizens.” Putin said the feeling was “mutual,” stressing that historically, the Russians and the Americans were close allies on more than one occasion.

Putin said “for over two centuries Russia has supported the United States, was its ally during the two world wars, and now sees the United States as a major partner in fighting international terrorism.”

On Friday, speaking at a joint briefing with British Prime Minister Theresa May, Trump said he hoped he would have a “fantastic relationship” with Russia’s president, but understands that might not happen. Trump has said previously that he would welcome Moscow’s involvement in a joint effort to battle Islamic State (IS, formerly ISIS/ISIL).

“I don’t know Putin, but if we can get along with Russia that’s a great thing. It’s good for Russia; it’s good for us; we go out together and knock the hell out of ISIS, because that’s a real sickness,” he said in an interview with Fox News.

Moscow, for its part, has repeatedly suggested fostering closer cooperation between the Russian and US Air Forces in Syria, but blamed the previous Obama administration for failing to adequately respond to its entreaties.

Relations between the two countries have been marred in recent years over various issues, including divisions on the Syrian crisis and allegations of Russian meddling into the US elections in November of 2016.

US sanctions against Russia – imposed over the crisis in Ukraine – was one of the issues expected to be on the agenda of the Trump-Putin exchange. However, the issue was not mentioned in the Kremlin’s statement summarizing the conversation.

Citing an unnamed source in the White House, a researcher at the Atlantic Council analytical center, Fabrice Pothier, wrote in a Twitter post on Thursday that the Trump administration “has an executive order ready” to lift the restrictions on Moscow, but Trump said on Friday that it is “very early to be talking about that.”

However, earlier in January, Trump said that he would consider lifting restrictions if Moscow cooperates with Washington on certain issues, such as nuclear arms reduction.

“They have sanctions on Russia — let’s see if we can make some good deals with Russia. For one thing, I think nuclear weapons should be way down and reduced very substantially, that’s part of it,” Trump was quoted as saying by the Times.

Trump also said in one of his Tweets that “having a good relationship with Russia is a good thing, not a bad thing,” warning only “fools” would think otherwise. However, several US Senators proposed a bill last week that would make it impossible for the US President to lift restrictions without congressional approval.

Russia has been cautious about the prospects for a potential “reset” with the US under the new administration. Russian Foreign Minister Lavrov said the country has no “naive expectations” and is under no “illusions.”