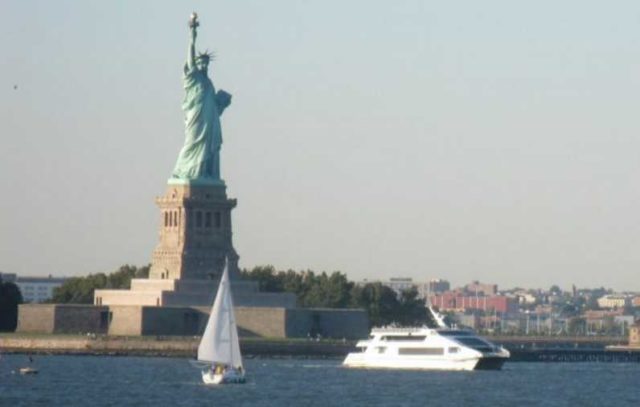 By the standards the US has applied to Syrian refugees selected before the illegal ban to enter the US, our current first lady would have been excluded.  She would not have passed the background check.  The moment the photos were seen and they read “model/escort” she would have been out.

Yet we are keeping Syrian medical students who have gone through far more rigorous checks than even FBI recruits out of the country.  We are assholes, at least many of us, and require a smackdown.

If there were a g-d, and I don’t believe there is, that’s just me mind you, he or she or it would wipe this place off the planet.  The US has become useless, like a pimple on the ass of the planet, but as I say again, this is just me saying this and I haven’t had my coffee yet.

It was America that declared war on Syria.  We loaded the country with terrorists from around the world.  How do you think you get from Indonesia to Syria without going through ICTS security at one or more airports.  ICTS, to conspiracy theorists, ran the airports supposedly used by the 9/11 highjackers, by the Detroit “crotch bomber” and almost every other airport where terrorists are given “air crew” walk arounds.  Former Mossad run ICTS but that’s not important now, not unless one of their clients kills you or your family.

No, let’s go after Syria.  Yes, there are terrorists there, trained in Turkey by the CIA with Israel, Saudi Arabia and Qatar.  There are terrorists in Syria trained in Jordan as well, brought into that country, which is unreachable, through Israel.  Nobody flies into Jordan without intense screening which I can attest to.

Yes, terrorists can be refugees, yes US backed, Israeli backed terrorists can show up as refugees and with lots of help, these groups have attacked Europe more than once.  I met with government counter-terrorist groups there in 2016 and shared intelligence with them.  They know, why doesn’t the US know.  These are NATO countries I talk to, don’t they trust the United States?

Terrorists don’t go through a lottery process, like the US runs, to get from nation to nation.  They are sent, they are aided, either by legitimate terror cells with international reach, something that is pretty rare, or by intelligence organizations set on destabilizing the European Union and bringing about things like Brexit or rigging the French elections.  Get it?

These terrorists generally travel in and out of Milan, Italy where they are given high quality documents at a diplomatic center controlled by a North African nation.  Ratlines move them across Europe and across and around the Mediterranean using the system of truck ferries there, I use these all the time, from Greece to Italy or Spain.

An adjacent set of ratlines moves in and out of Belgium, this is human trafficking, usually for sex, most often children  All of this traffic, according to the security groups, goes through Belgium, and from there into Britain and Germany.  Instead of watching sex tourists heading to Thailand, best watch Belgium or Germany, this is where the real damage is done.

NGO’s in Morocco, some run by Americans, move women and children from Africa into Spain where they get to France on fishing trawlers and other methods, and from there to Belgium.  The pedophile rings there are run by police and controlled by powerful corporate leaders and members of the royal families of Belgium and the Netherlands, but we digress.  Prominent Americans are major “users” of these children including one dead Supreme Court justice, we won’t mention his name, but it got him killed with a pillow over his face.

Thank the mainstream news for covering up this story, even InfoWars got it right, except the reason he was killed.

Let’s talk Syrians again.  We have a nation where the US encouraged many to fight Assad and pulled them into a war where the US also armed terrorist groups as well to aid them, as US policy went, CIA covert policy as it were.  What happened is that the moderate groups were co-opted by al Qaeda and ISIS, who paid much more money since they had unlimited Saudi cash.  These people are all paid, some may have been “freedom fighters” at some point but most got $300 a month with some much more.

The US actually brought the families of some terrorists to Syria where the formed communities in Raqqah, deir Ezzor and Mosul in Iraq, many other towns and cities, entire families resettled into the Israelo-American social experiment known as the Islamic State.

People don’t move around the world without the help of powerful organizations and lots of money.  Everyone in the world doesn’t magically fly to Turkey where everyone who enters the country, even tourists, are subject to background checks and military screening except that 200,000 passed through for some reason.

Now Erdogan is upset that the mess he helped make is biting him in the ass, like Israel would betray him or the US abandon him?  “Hoodathunkit?”

Here is our point today, the Syrians coming to the US are victims of American war crimes, we did it.  These people are selected and chosen by us, they go through humiliating and unimaginable screening and Donnie Trump knows all of this.  Instead he is pandering to his trailertrash bible thumping kid screwing backers who have been running around the US for the past two months painting swastikas on everything and making more public asses of themselves than usual.

These are not the decent Americans, these are the chiselers, the litterers, the shoplifters, these people are why children can no longer walk to and from school.  Those who actually live here know this.  Trump’s bipolar disorder and ADHD, his obsession with the puerile, the smut, the pussy grabbing, golden showers and even smuggling Eastern European call girls into Ameria….this is too depressing to continue with.

I welcome Jews into America, I have no problem with more coming and if Israel gets “re-sized” through enforcing international law, America can take a million more Jews.  We can take Syrians too, as Michigan governor Rick Snyder has made clear.

These are people who grow our economy, the Jews, the Muslims, those who come here to work, to build, to invest.  Seeing what America has become politically and socially, it isn’t hard to see that change is needed, that better people need to be brought in, that we are in our cultural death throes.

With all the crap we read about Detroit, perhaps I might do a film there for RT or Press TV.  I can show you the immigrant neighborhoods, the stores and restaurants, the clean streets, the lack of crime and the nasty level of civility where people open doors for you and say “hello” when they pass by.

Two million Iranians are already in California alone and not one of these has been involved in terrorism.  Iranians in America are nasty people, tax paying and hard working, always well educated, though most of them are conservative Republicans.  We are banning them too.

All the while this is going on, financial criminals are looting America, a moron and political hack is taking over the destruction of American schools.  An infamous bigot is going to be Attorney General while a paid shill of big polluters is protecting America’s environment.

Executive orders went out to officially replace all scientific or other studies done for peer review with edited versions using “alternative facts” that support the misogyny and race hatred some who call themselves Americans are guided by.

These are not real Americans, they are squatters.  People who don’t like America’s freedoms might simply leave, were there some nation that would take them.  There isn’t one.

Why is America stuck with a dangerous minority of ignorant and backward and why are decent people being kept out?