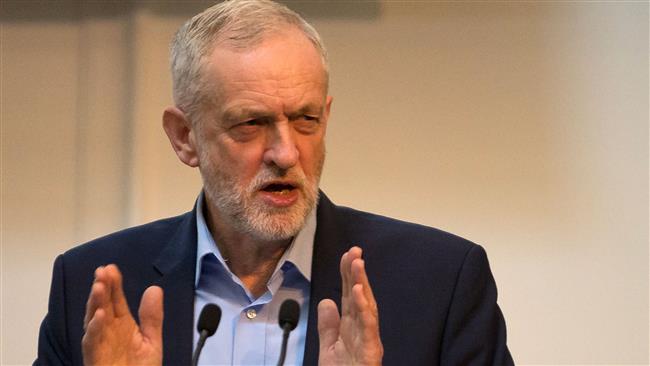 US President Donald Trump should be blocked from making his planned state visit to Britain as long as his “Muslim ban” policy remains in place, says UK Labour leader Jeremy Corbyn.

In an interview with ITV on Sunday, Corbyn railed against Trump’s recent directives to ban Muslims and refugees from entering America and said UK Prime Minister Theresa May should condemn his actions in “the clearest terms.”

“Donald Trump should not be welcomed to Britain while he abuses our shared values with his shameful Muslim ban and attacks on refugees’ and women’s rights,” the opposition leader told ITV on Sunday.

During her visit to Washington, May said Saturday that Trump had accepted an invitation from Queen Elizabeth II to visit Britain later in the year.

Trump signed a new executive order on Friday, indefinitely blocking the entry of Syrian refugees while suspending the entry of any immigrants from Syria and other Muslim countries like Sudan, Somalia, Iraq, Iran, Libya and Yemen for 90 days.

Corbyn said the visit “would be totally wrong,” arguing that the UK was “very upset” about Trump’s actions.

“Theresa May would be failing the British people if she does not postpone the state visit and condemn Trump’s actions in the clearest terms. That’s what Britain expects and deserves,” he warned.

Protests erupted Saturday at airports in Dallas, Chicago, Boston, Los Angeles, New York and elsewhere after border agents began detaining refugees and immigrants who arrived in the country a day after Trump’s order.

Capping a day of chaos and protests, a federal judge in Brooklyn, New York, issued an emergency stay of deportations in a blow to the new administration.

During her US visit, May refused to condemn Trump’s move. Her Foreign Secretary Boris Johnson, however, has denounced the act as “divisive and wrong”

Meanwhile, an online petition in the UK which calls for Trump’s visit to be cancelled altogether has gathered over 290,000 signatures, nearly three times the number it needs to be considered for a debate in Parliament.

The petition argues that Trump should not be allowed to visit the royal family because of his “well documented misogyny and vulgarity,” pointing to the former pageant organizer’s offensive comments about women.