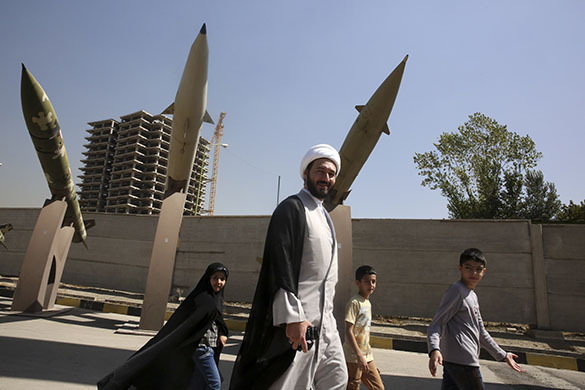 Iran has tested medium-range missiles in response to recent decisions of the Trump administration. Republican Alcee Hastings introduced a resolution entitled “Authorization of Use of Force Against Iran,” which entitled the US President for the use of force against Iran to stop the country from creating nuclear weapons. Is the war near?

On Monday, Iran tested a medium-range ballistic missile. The missile flew for over 900 kilometers and then exploded before reaching the target, as Pentagon spokesman said describing Iran’s “unsuccessful” experiment. On Wednesday, Iranian Defence Minister confirmed the information about the tests, Iranian news agency Tasnim reports.

Washington refers to the UN Security Council resolution from 2010, which prohibits Iran from conducting any activity related to nuclear-capable ballistic missiles.

Donald Trump had repeatedly stated during his election campaign that he would revoke the agreement with Tehran on its nuclear program, even though his predecessor Barack Obama valued the agreement a lot. In March 2016, Trump stated that the people who represented the United States at the conclusion of the agreement were “very stupid.” “My number-one priority is to dismantle the disastrous deal with Iran,” he proclaimed in March while addressing the American Israel Public Affairs Committee.

Tehran conducted the tests after Trump insulted the Iranians by putting them on a par with major suppliers of jihadists to the United States. Trump’s immigration order imposed a temporary, 90-day ban on people entering the US from Iraq, Syria, Iran, Libya, Somalia, Sudan, and Yemen. According to the order, those countries are either torn apart by jihadist violence or remain under the control of hostile, jihadist governments.

Iran apparently falls under the second category of countries. Iranian Foreign Minister Mohammad Zarif called the decree “a shameful act”. Indeed, Iran is known for its opposition to the Islamic State. Why does Washington think of Iran as a jihadist nation?

Let us keep in mind the fact, dear reader, that the United States still considers the pro-Iranian Hezbollah movement to be responsible for the largest terrorist attack committed against the US military after World War II (in Beirut on October 23, 1983). As many as 241 US servicemen were killed as a result of the terrorist attacks on headquarters of US and French peacemaking contingents. In 2003, US District Judge Royce Lamberth accused the Islamic Republic of Iran of the attacks. Hezbollah was recognized a terrorist organization in the US.

Iranian Minister Mohammad Zarif said after meeting with his French counterpart on Tuesday that the Iranian missiles “were not capable of carrying a nuclear warhead.” “Our ballistic missile was designed to carry a conventional warhead for the purpose of legal self-defense.” The official  expressed a hope that the new American administration would not use the implementation of Iran’s military defense objectives “as an excuse to create new centers of tension.”

One way or another, many international agreements have one big drawback – their understatement. Each side interprets them in their own way, and it can be hard to find where the truth lies.

Iranian President Hassan Rouhani is right when he says that Trump is a “newcomer in politics.” “This is a completely new environment for him. His actions will cost the United States a lot until he finds out what’s going on in the world,” Rouhani said Wednesday.

Iran has long been at the forefront of the struggle against the Islamic State. Iran has a significant influence in Syria; the country took part in the Geneva process in 2015. Iran uses its leverage to reduce violence and achieve peace in the Middle East. Iran is an ally of Russia and Turkey in the Syrian conflict. If the United States tries to solve the problem of the Islamic State without the participation of Iran, the latter may set its coalition partners against the US and disrupt the offensive near Mosul.

“Trump is a representative of the pro-Israel lobby in the United States,” doctor of political science Mikhail Aleksandrov, a leading expert at the Center for Military-Political Studies at MGIMO told Pravda.Ru. “Iran had had a large-scale missile program before those UN Security Council resolutions. The Iranian missile program does not appear in the restrictions of the UN Security Council. Yet, the US tries to misinterpret those restrictions. The resolution from the senator appears to be a way of psychological pressure on Iran. One does not need any resolutions from Congress to use force against Iran. The US president can simply sign an order to do that,” the expert told Pravda.Ru.