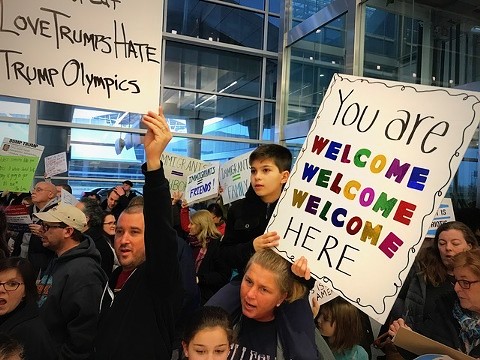 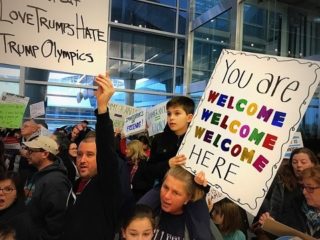 As an immigrant, as the son of an immigrant, and as a US Army Veteran with four brothers who each served our adopted country honorably — 2 Army, 2 Marine — and from far away Sweden (on a visit, but not seeking asylum), I could not help but admire and be proud of America and the hundreds of thousands across our great country who showed solidarity against the ban on Muslims and immigrants entering the United States.

No one can deny the needs of our country to be vigilant against terrorist attacks or “lone wolf”. However, an Executive Order banning entry of Muslims from five predominantly Muslim countries overlooked the fact that the 9/11 “terrorists” did not come from those countries.

For many years since 9/11, the United States has put in place a solid and effective “vetting system” for all immigrants from the Arab and Muslim worlds, keeping in mind that no other people suffered more from the American Occupation of Iraq and its spill over consequences and from “Islamic Jihadists” than those countries listed in the ban, adding Jordan, Syria, Lebanon, Libya, Egypt to the list.

It is so ironic that the newly designated “Countering Violent Extremism” or CVE has been revised and is limited to “Islamic Extremism” leaving out White Supremacist, Extreme Nationalists, Zionist Nationalist, and racist Islamophobists, among others.

Or Mr. Ed Burns, the funeral home owner who gave me my first full time job out of the Army. Or my fellow steel mill workers at Inland Steel, who are welcoming.

This is America, where good decent citizens raised over a million dollars to rebuild a Texas mosque burned to the ground by arsonists, and where a Jewish synagogue in the same town handed over its keys to the Muslim congregation for worship after the fire. Only in America can such acts of kindness take place.

This is the welcoming America I knew when I was drafted in the US Army and was given special meals to accommodate my faith.

This is America, where I have life long friends from high school and the Army — welcoming. America is a welcoming country, and President Trump with his executive orders will never change the nature of America or who we are as Americans.

I had to recall the overwhelming support, both calls and physical presence, for my family in Fairfax from our friends and our neighbors, and members of the PTA and teachers of our children’s schools after the September 11 attack on America.

This is the America that tens of millions of immigrants like me know, love and appreciate, a country unlike any other country in its welcoming of refugees and new immigrants.

One can only appreciate America and what it stands for in that moment when new immigrants passing their citizenship stand up and give loyalty to America, our adopted country.

These are the new citizens from Europe, from Southeast Asia, from the Middle East, North Africa, Africa and Latin America — diverse in color, faith and ethnic origin but united in our loyalty to our adopted country. And who can doubt that?

Here in Sweden, I am so proud when I speak with Swedes and talk about the demonstrations at major airports across the country. I am proud to see companies like Lyft donating to the ACLU to help fight racism and bigotry; I am proud of Starbucks offering to employ 10,000 immigrants; I am proud of AIRBNB offering a free stay for newly arriving immigrants.

Let us also remember those businesses and banks that failed to speak up in support of the free immigration to America. If we can vote politicians in with our votes, I am sure we can make our money vote for us too. 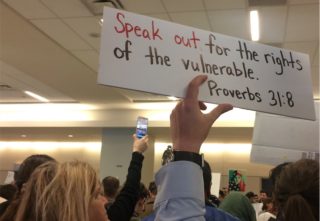 I am proud of the many governors and mayors who took time out to show support and solidarity with those affected by President Trump’s Executive Order banning Muslims and immigrants.

I am not so proud of the hundreds of members of the House and Senate who chose to remain silent in the face of this shameful act. In November 2018, we will hope that those who spoke against the executive order will remember which members of Congress chose to be silent.

Of course, we all remember the shameful time in our history when Jewish refugees escaping Nazi Germany were denied entry to the US. We also remember the times when Congress passed immigration laws favoring those from European counties and limited the number of immigrants from “colored” countries and from those of faiths other than Christianity. We are not so proud of the internment of Japanese Americans during WWII — made more shameful because the most liberal Supreme Court justices supported their interment.

But then America is free, proud, home of the brave; and we will make sure that this administration and the administrations to come live up to the ideals that make America who we are, a welcoming country.

My proposal for all the immigrant professionals, especially doctors and lawyers, is that it is time to step up to the plate and show in real service our commitment to this country and its people.

With tens of thousands of medical doctors from immigrant backgrounds, the best thing we can do is to organize nationwide free medical clinics, not only serving urban poor but serving rural Whites — and show them our appreciation, not by words, but by deeds. I am sure those who incite and promote Islamophobia and anti-immigration sentiment would be surprised at our contribution to our adopted country.

From Goteborg, Sweden, thank you America.