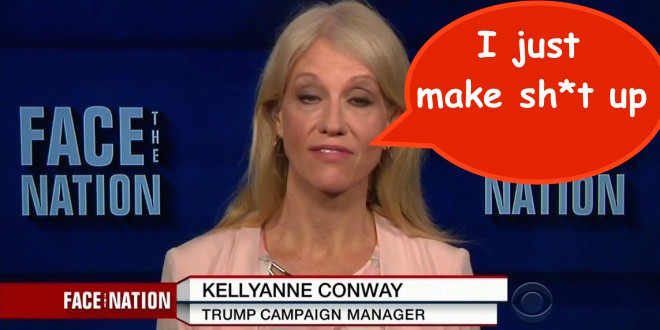 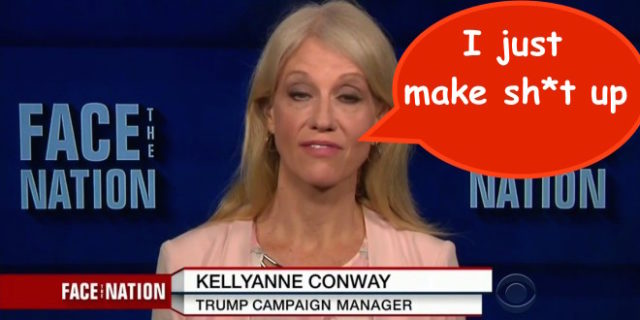 Trying to keep up with the lies manufactured by the Trump Administration? Good luck with that.

But maybe we’re finally catching on, catching up, getting ahead of them?

…the “Bowling Green Massacre” may go down in the record of the Trump presidency as the first break in the “fake news” clouds that have cast such gloom over our fair and once (relatively) true republic.

The New York Times, the biggest culprit in the biggest fake news story of all time (that 19 Muslim hijackers did 9/11) says Trump mouthpiece Kellyanne Conway was lying when she claimed that

2 Iraqi refugees ‘were the masterminds behind the Bowling Green massacre.

Of course the Times is right. There was no “Bowling Green massacre.” Conway, like Trump, just makes sh*t up.

But then the Times let Conway get away with another lie, reporting that Conway says the story of her lie was:

overblown because “I misspoke one word.” (By that, she meant, apparently, that she should have said “Bowling Green terrorists” rather than “Bowling Green massacre.”)

But there were no Bowling Green terrorists, either.

Conway was referring to two Iraqis arrested in 2011 who were accused of helping the Iraqi resistance. One of them left his fingerprints on an IED targeting occupation forces.

Call these guys whatever you want – resistance fighters, insurgents, rebels, anti-occupation militants, freedom fighters, or all of the above – but don’t call them “terrorists.” The word “terrorist” means “targeting civilians to spread fear.” These two guys were not terrorists, because their IEDs targeted soldiers, not civilians.

And not only are those two guys, still languishing in prison, not terrorists….they are actually heroic fighters in the real “War on Terror.”

The US and its ally, the UK, have murdered about 8 million Iraqis, virtually all civilians, since the 1950s, according to research by Australian physician Gideon Polya. The post-2003 American occupation was essentially a war against the Iraqi civilian population; its aim was to terrorize Iraqi civilians into allowing their country to be occupied by foreigners from halfway around the world. So the US, in Iraq, was the terrorist. The two Iraqis arrested in Bowling Green were convicted of fighting against terrorism, not of perpetrating terrorism.

But the Zionist-owned New York Times will never tell you that, any more than they will tell you about the controlled demolitions of 9/11 that paved the way for America’s war-in-Iraq-for-Israel.

So the New York Times let Kellyanne Conway get away with her second lie.

If they really want to get rid of Trump and his insane Islamophobia, the Times and the rest of the Zionist-dominated corporate media need to reveal the whole truth about terrorism — starting with the truth about 9/11.