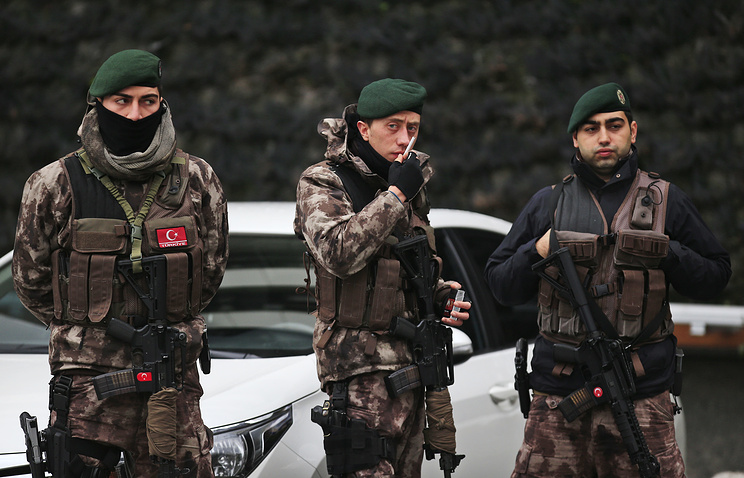 Vedomosti: Washington looking to drive wedge between Moscow and Tehran

Russia and Iran have a common objective in Syria, and all assertions about the possibility of driving a wedge between the two countries are speculations, Vedomosti quotes former Russian Ambassador to Saudi Arabia, Andrei Baklanov, as saying. “We have substantially coinciding stances with Tehran. Bashar al-Assad’s regime is legitimate and should be preserved, while Syria’s future must be determined by the people of the country. As for Iran, Trump currently has other priorities or just does not have enough hard facts,” the diplomat stressed. The Wall Street Journal earlier reported, citing high-ranking sources in the White House, Europe and some Arab countries, that the Trump administration is searching for ways of destroying the military and diplomatic alliance between Russia and Iran to accelerate the end of the conflict in Syria and step up the fight against the Islamic State (terrorist group, outlawed in Russia).

The US will be unable to influence the Russia-Iran alliance directly, according to Vladimir Yevseyev, Deputy Director of the CIS Countries Institute. In his view, Washington can create problems indirectly, primarily by hampering the work of Russian businesses in Iran through new sanctions against Tehran or strengthening the existing ones. Discord in the Russia-Turkey-Iran troika in Syria is possible as well, and Moscow should prevent this from happening, the expert went on to say.

“The possible weak points are demands for Tehran to stop arms supplies to Hezbollah via Syria and the withdrawal of Revolutionary Guards advisers from that country. If that happens, Iran’s role in Syria will diminish substantially, which make combat operations more difficult, while Iran will get the impression that it has been excluded from the process. In that case, it may turn against Russia.”

Moscow and Tbilisi will hold another round of consultations on mending bilateral relations in Prague on Tuesday. As usual, Russia is represented at the talks by Deputy Foreign Minister, Grigory Karasin, and Georgia – by Special Representative for Relations with Russia, Zurab Abashidze.

Georgia has been doing its utmost in terms of abolishing visas for Russians and citizens of other countries, Abashidze told Nezavisimaya Gazeta. “We have cancelled visa restrictions for Russian nationals,” he said. “They may stay in Georgia without visas for up to a year. For its part, Russia simplified visa requirements for Georgian citizens, which affected the number of issued visas. We heard the Russian president’s remarks about the possibility of abolishing visas. If Russia pushes ahead with its efforts in terms of simplifying requirements or abolishing visas, we will see that as a step in the right decision, which would be praised. The visa issue is Russia’s domain. If there are new proposals on this matter, we will hear them out and discuss them.

When asked about the prospects for restoring diplomatic relations between Moscow and Tbilisi, Abashidze emphasized that that “the issue will not be on the agenda as long as Georgia’s territorial integrity is violated.” “However, if the process of resolving the problems related to Abkhazia and South Ossetia begins, if significant progress is made, restoration of diplomatic relations could be included in the agenda at some point,” he emphasized.

Izvestia: Russia to use airships to keep eye on football fans They could be used for the first time during the 2017 FIFA Confederations Cup scheduled to be held in Russia this summer. A source in the Russian National Guard informed TASS that the use of aerial monitoring systems is a new direction in developing weapons for Russia’s National Guard Troops.

“As a rule, there is a small group of troublemakers who revel in sparking destructive activity. They are behind the masses of people who take to the streets,” Sergey Melikov, First Deputy Director of the Russian National Guard, explained in an interview with the paper. “Therefore, we need to localize such offenders and detain the instigators. We ensure people’s safety, first and foremost. We see our mission as preventing adverse conditions where mass discontent may escalate into mass civil disobedience.”

Meanwhile, Vsevolod Alexeyev, Chairman of the Society for Consumer Right’s Protection in Sports, told the paper that the proposed move could be of considerable help in ensuring security during the Confederations Cup and the FIFA World Cup. “It is clear that security requirements during the World Cup and the Confederations Cup in Russia will be very stringent, and the task of all services involved is to minimize possible incidents. If aerial monitoring makes it possible to identify specific individuals who break the law, this will significantly contribute to ensuring security.”

Moldova’s President, Igor Dodon, will soon start negotiations with other representatives of the Moldovan authorities on Transnistria and the presence of Russian peacekeepers there, presidential adviser for Transnistria, Vasile Sova, informed Nezavisimaya Gazeta. Prime Minister Pavel Filip earlier asked the Organization for Security and Cooperation in Europe (OSCE) to again consider the issue of “the illegal presence of Russian troops,” including peacekeepers, in Moldova. According to Sova, Russian peacekeepers were deployed to that country under the 1992 agreement, which has a substantial legal base, which means that there are no grounds to question their presence.

However, they could be replaced as part of the “5+2” international negotiation framework (Moldova and Transnistria as parties, Russia, Ukraine and the OSCE as mediators, and EU and the US as observers). Negotiations within this framework were frozen for several years. After the arrival of President Igor Dodon, a glimmer of hope appeared that they could be revived. Dodon was the first president who travelled to Tiraspol to meet with new Transnistria leader, Vadim Krasnoselsky, and struck a deal on regular meetings with him, the paper notes.

“The ruling coalition in Moldova never achieved any positive results during its negotiations with Transnistria,” Irina Vlah, head of Moldova’s Gagauz autonomy, told the paper. “But then Dodon appeared who is prepared for talks with Transnistria at any level. Dialogue is necessary, but there is no need to hurry,” she said.

Izvestia: Turkey carries out mass arrests in run up to constitutional referendum

The latest wave of arrests in Turkey is not only part of a counter-terrorism campaign but also part of the preparations for the referendum on a new draft Constitution, which envisages transitioning the country from a parliamentary to a presidential republic, a source close to diplomatic circles in Ankara told Izvestia. “The vote is expected to be held in April,” the source said. “Meanwhile, Turkish President, Recep Tayyip Erdogan, needs to tackle two problems, namely, the economic crisis and rampant terrorism. This will make it possible for him to get the required support from the Turkish population. So, the recent arrests should be seen from this perspective as well.”

According to the latest data, Turkish security forces have arrested nearly 800 people suspected of having links to the Islamic State (terrorist group, outlawed in Russia).

Igor Morozov, member of Russia’s Federation Council (upper house of parliament) International Affairs Committee, said in an interview with the paper that this is further evidence of Ankara’s change in attitude towards those forces, which the Turkish leadership previously had turned a blind eye to.

“Turkey’s stance on the Islamic State has changed significantly. Erdogan saw that members of this group carry out terrorist attacks against Turkish officials. Very often, militants are a tool in the hands of the opponents of the Turkish president,” Morozov explained. The senator added that the large-scale arrests can be seen negatively in Turkish society too, since many of Erdogan’s political opponents have been detained as well.