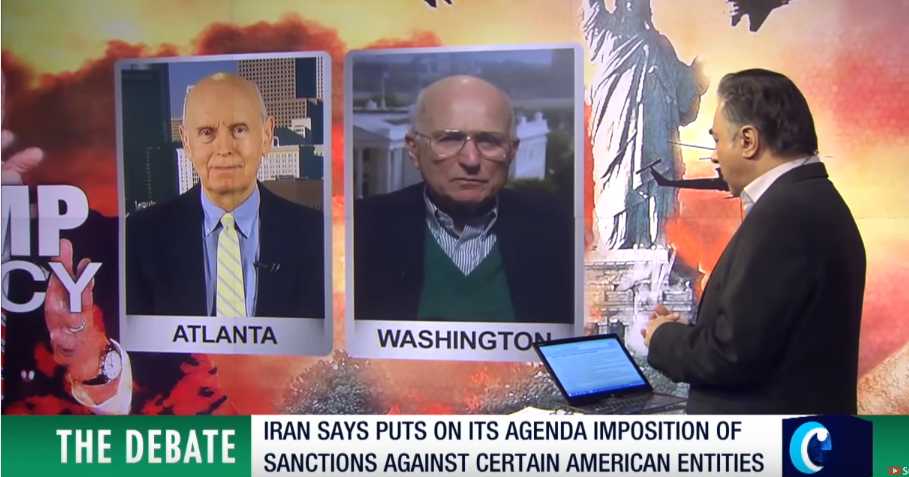 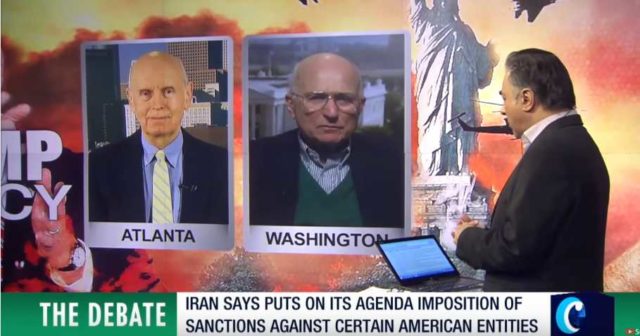 [ Editor’s Note: It’s always a pleasure to be on The Debate show with Larry Korb as I don’t have to listen to the silly activists grandstanding comments that they feel elevates their careers. I prefer “the grownups”, even if we disagree on some issues. Larry is also ten years my senior and I hope to be going as strong as he still is at 77.

I had been waiting for Trump to pick his Iran club back up, but must say I was surprised with this “Iran is the biggest exporter of terror” silliness. I cannot believe that he actually got briefed on this really being the case. The Donald was working for Israel on this one, not the American people.

We don’t have a soul among our extensive Intel community contacts that really believe this. They are long used to sham threats like this being trotted out to the public to soften them up for getting their pockets picked for defending America from manufactured threats. Business is booming on that now.

The Iran case is a sad one as what we see missing in the context of the threat discussion is not a single word about how the G5+1 Iran agreement exposed that the claims of Iran’s secret nuclear weapons program had always been a complete hoax. All the Iran haters in Congress who had had top level briefings confirming that claim could have gone public to kill the deal, or leaked it.

Even Israel, who had claimed for over two decades that Iran was a year or two away from “da bomb”, could have killed the deal by putting their confirmed Intel on the table. It did not because it never had any. The world public not only got scammed on this, but there was no real outrage over the long term lie being proven. There was not even a whimper.

So why should not the liars keep lying, as it appears there is no reputational risk to them whatsoever? And whose fault is that? Not a single institution that I am aware of made a big deal of the hoax being exposed, the problem I suspect was because Israel was involved so it was better to keep quiet.

A people on its knees will never have any security, from either external threats, or the internal ones here at home. When is the last time the FBI broke up an Israeli espionage network here, when we know they are everywhere, in media, academics, the military, and in Congress? Will there ever be one?

As long as we all go along with the elephant in the living room being ignored we will be part of the problem, like a substance abuser that has not been able to kick an addiction, despite the long term damage being done. Both the Alchoholics  and Narcotics Anonymous organizations will tell you that you can’t even begin to help a person who will not admit they have a serious problem.

I wish I knew what the secret solution is to snap people out of their stupor, the organizations I mean. A lot of individual folks “get it”. We have always had them here at VT, and we have plenty among our extended network. But when it comes to institutional America, it is missing in action, and we all suffer that failure… JD ]

By putting Iran “on notice,” the new U.S. administration is laying the groundwork for a more confrontational approach toward the Islamic Republic. Add to that sanctions, travel ban which includes Iran, and you have a recipe for tensions and friction adding up to confrontation.

Russia and China don’t like it, so much that Russia has announced it will do its best to reduce tensions. In this debate, we’ll discuss why the US is setting up a confrontational approach with Iran.

Dean comes from an old military family going back to the American Revolution, the Confederate side of the Civil War, WWII and Vietnam. He is a long time member of Military Order of World Wars, Association for Intelligence Officers, and has guest lectured at the Army Command and General Staff School at Fort Gordon. He is Senior Vice President, Adamus Defense Group, Switzerland

Korb served as adviser to the Reagan–Bush election committee in 1980 and was then appointed Assistant Secretary of Defense (Manpower, Reserve Affairs, Installations and Logistics) from 1981 to 1985. In that position, he administered about 70 percent of the defense budget.

For his service he was awarded the Department of Defense’s medal for Distinguished Public Service. Larry has published 20 books on national security issues.