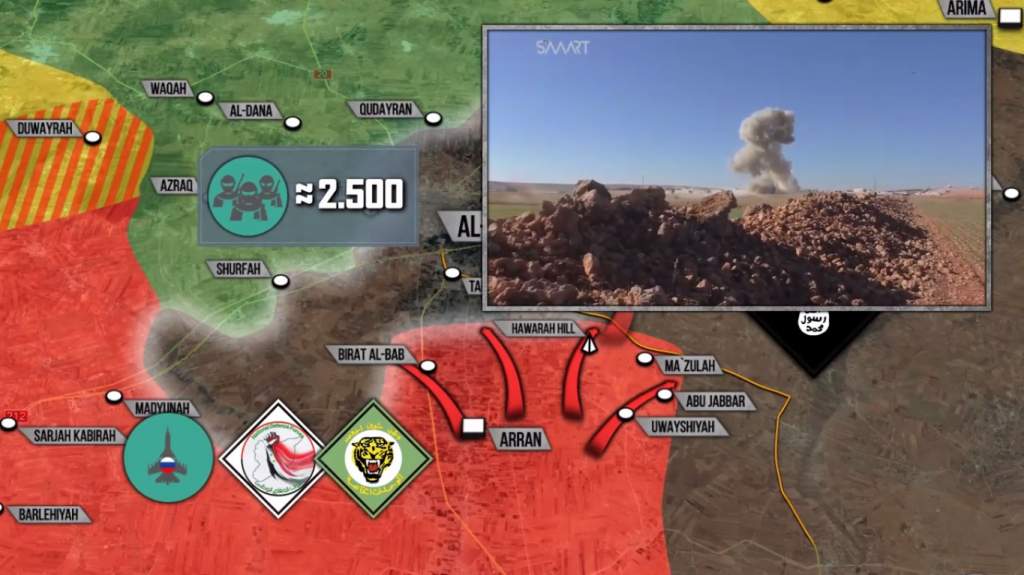 [ Editor’s Note:  This encirclement, not a physical one but a supply blockage one, has been long in coming but is an important even symbolically and strategically. First, it is a result of various conflicting forces working together to take a key IS forward base position.

And second it sets up a test for seeing if the new anti-ISIS terror coalition has abandoned the disastrous “push them out of the area”, which allows them to regroup and counter attack somewhere else, or destroy them in place while they have them on the mats.

In the past they have wanted to avoid avoid any avoidable casualties among the attacking troops as sustaining morale in the military is a do or die item. And then there is the problem of large civilian casualties if street fighting is required to kill the last IS man in al-Bab, but long run, while that might seem cruel to the civilians it will save lives in the end.

Letting these highly trained and experienced jihadis escape is a huge disaster as they are each capable of regenerating themselves after some rest and relaxation in Saudi Arabi, Qatar, or in the CIA’s case one of their Chechen camps. The Russians were correct right from the beginning when Putin said, “better to kill them in Syria”, and several thousand jihadis from the Russian federation have been killed in Syria.

And lastly, the jihadis in Raqqa will get a clear message if they see no live jihadis making it our of al-Bab, that they have to get out while they still can if they want to live. Turkey has already been the big loser here, when its entire army and airforce was fought to a stand still by 3000 jihadis in al-Bab. It has astounded me that this elephant in the living room has gotten no coverage… Jim W. Dean ]

The Syrian army’s Tiger Forces and the National Defense Forces (NDF), supported by the Russian Aerospace Forces, have retaken the village of Ma`zulah, the Hawarah Hill, Abu Jabbar, and Birat al-Bab from ISIS terrorists in the area southeast of al-Bab in the province of Aleppo.

The army and the NDF physically cut off the only ISIS supply line to al-Bab and de-facto closed the pocket with about 2,500 terrorists. If ISIS is not able to make a successful counter-attack soon, the fate of its forces in the area is predetermined.