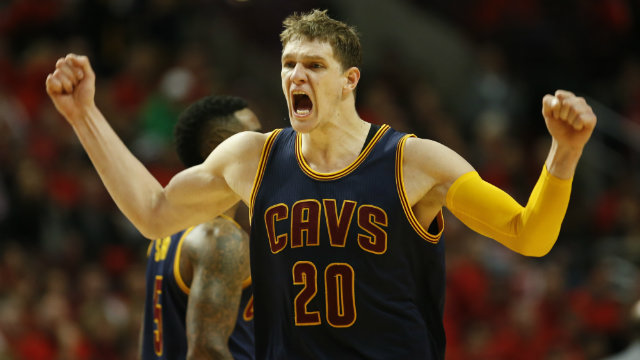 
Basketball player Timofey Mozgov didn’t realize that he was indirectly attacking the Neocon psychopaths and their puppets when he declared that “When we talk about Russia in the States and Trump, I don’t get why people get mad. If he [Trump] wants to make a good relationship with Russia, I don’t get it. It’s good to be friends with somebody.”

I don’t get it, either. The Neocons know pretty well that a war with Russia will leave the West—and almost certainly America—in a sorry state of affair. It is safe to say that it would be worse than the wars in Iraq, Afghanistan, Libya, and even Syria precisely because Russia has nukes in their basement.

This is serious stuff, and the Neocon psychopaths continue to marshal perverse arguments against a nation that has been obliterating terrorist cells such as ISIS in places like Syria. The psychopaths obviously think that killing innocent people in the Middle East is like playing video games, and they think that Russia is their next victim.

Writers like David Horsey have already said ridiculous things in the LA Times about Putin.[1] Puppets like John McCain and Lindsey Graham have already urged Trump to literally punish Russia. Graham himself has said that Trump

“should let everybody know in America, Republicans and Democrats, that you’re going to make Russia pay a price for trying to interfere.”[2]

Will Graham ask Republicans and Democrats to make America pay for interfering in foreign countries for the past one hundred years?[3] Will he even tell the Israeli regime to stop their perpetual wars, which obviously have fueled conflicts and hatred in the Middle East?

Graham cannot do that because that will get him into trouble.

“Some of the things he [Putin] does, you’ve got to understand, like Trump, like Obama, like American presidents tries to [make] America better, this is the same way. It’s like any country — Putin or whoever. It’s for everybody — whatever decision you make, you probably think how it will be better for your people. If I was president, I would be the best to my people.”

You see, these stupid ideas cannot flourish in a rational world at all. They can only make sense to morons like the Neocon psychopaths precisely because they do not care whether innocent people live or die. These people are political psychopaths, and they have no empathy or remorse for their victims.

These people look nice with suits and ties, but they are vipers that have slithered out of the diabolical swamp. Robert D. Hare of the University of British Columbia writes that “The most obvious expressions of psychopath—but by no means the only ones—involve flagrant violation of society’s rules.”[4]

If this seems a little farfetched, let us listen to John Bolton: “It is a big mistake for us to grant any validity to international law…because over the long term, the goal of those who think that it really means anything are those who want to constrict the United States.”[5]

There you have it. These people have vowed to take the world down with them, and they will swipe any international law under the rug if they have to. Those psychopaths, as Hare would have put it, have “a deeply disturbing inability to care about the pain and suffering experienced by others…a complete lack of empathy, the prerequisite of love.”[6]

But since these psychopaths do not have infinite power, they are now propounding what seems to be infinite lies, hoaxes, fabrications, and complete forgeries. How else would Amnesty International propound that the Assad government has already hanged at least 13,000 mercenaries without a shred of evidence?

But even if that were true, that would still be a huge problem for Neocon psychopaths. As Gordon Duff and Jim W. Dean have recently reported, what should we do with 100,000 terrorist mercenaries in Syria? Play dice with them? Give them carrots? And didn’t Neocon psychopaths create sodomy at Abu Ghraib and leave Iraq in total chaos?

If Assad is a butcher and needs to be brought to trial, as McCain has promiscuously propounded, then he is not the only butcher in town. McCain and the entire Neocon psychopaths need to be put on trial as well.

[4] Robert D. Hare, Without Conscience: The Disturbing World of Psychopaths Among Us (New York: Guilford Press, 1993), 2.

[6] Hare, Without Conscience: The Disturbing World of Psychopaths Among Us (New York: Guilford Press, 1993), 6.