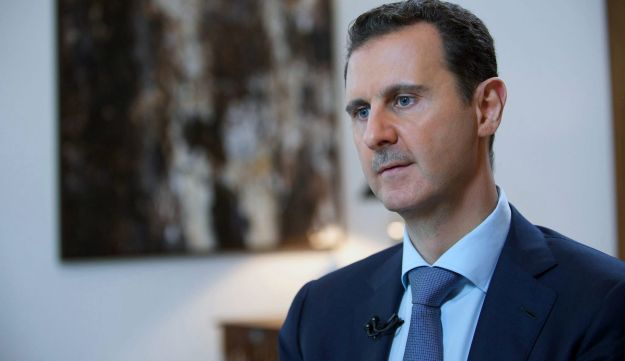 [ Editor’s note:  Last week, Amnesty International published a report that Syria’s Grand Mufti, certainly the most progressive liberal religious leader in the Middle East had personally authorized the execution by the tiresome process of hanging of 13,000 prisoners.

Mind you, not that I am critical of stories of the holocaust or even Israel’s continual denial of having nuclear weapons but this narrative has a particular smell.  One particular story told about SS killings in Russia during WW2, killing of Jews, comes to mind.  It seems, while the Germany army had already killed 20 million Russians, special groups were sent to Russia to hunt down Jews.

These groups, as the story goes, would have an easily sealed truck that Jews would be put into and killed by exhaust fumes.  A truck, or perhaps two, containing soldiers, would travel with them.  The idea was to kill Jews with exhaust fumes from diesel hauled 600 miles from Romania, in order to save money that bullets would have cost.

Also, hunting down Jews, sometimes walking miles, bringing families back to the gassing truck, loading them in, revving up the engine and then offloading the bodies was a process Germany chose to save their soldiers from the brutal act of shooting people, like the 20 million they had already shot.

Then, in order to save money and destroy evidence, as an act of efficiency, the bodies were unloaded, put on other trucks and taken back to Poland, another 600 miles, to be incinerated in special ovens that Germany totally destroyed, even vacuuming up the brick dust.  I am not saying that any of this is false, but that it reminds me of Amnesty International, if you catch my inference.

We believe Trump’s Tel Aviv handlers, or rather Steve Bannon’s. He is the real president as Trump has proven himself incapable of more than a few seconds of focus. We are hoping for the US to push this on Russia and have them push it on Syria to allow Israeli occupation, or ISIS occupation, same thing, and keep this war going forever … Gordon Duff ]

Syrian President Bashar al-Assad has rejected his American counterpart’s plan to create “safe zones” in Syria allegedly to protect refugees fleeing violence in the war-torn country and to stem the flow of displaced people into other countries.

“It’s not a realistic idea at all. This is where you can have natural safe zones, which is our country. They don’t need safe zones at all,” the 51-year-old Syrian leader said in an interview with Yahoo News released on Friday.

He added that “It’s much more viable, much more practical and less costly to have stability than to create safe zones.”

Assad further noted that safe zones in Syria would be at risk of attack from foreign-sponsored extremist groups fighting to topple the incumbent Syrian government.

The remarks come as the United Nations also rejects safe zones, saying the status quo in Syria does not allow for the creation of safe havens in northern Syria. Speaking in an interview with ABC News on January 25, Trump said he “will absolutely do safe zones in Syria,” without giving details.

Assad further stated that the Syrian government would welcome cooperation with Washington in the campaign against the Takfiri Daesh terror group only if the United States respects Syria’s sovereignty and unity, and takes a “clear political position” on the matter.

He said US troops would be “welcome” in Syria to fight Daesh provided that Washington coordinates with Damascus, and recognizes the Syrian government’s sovereignty.

“If the Americans are genuine, of course they are welcome. Like any other country, we want to defeat and to fight the terrorists,” he said.

“Troops are part of the cooperation… (but) you cannot talk about sending troops… if you don’t have a clear political position toward not only the terrorism, toward the sovereignty of Syria, toward the unity of Syria. It must be through the Syrian government,” Assad pointed out.

The Syrian president also warned that there are “definitely” terrorists among millions of Syrians seeking refuge in the West.

He said it does not have to be a “significant” number of terrorists to commit atrocities, stressing that his priority is to “bring Syrian refugees back to their country, not to prompt them to immigrate.”

‘No evidence’ for Amnesty report

Elsewhere in his remarks, Assad dismissed a recent report by Amnesty International alleging that military forces had hanged as many of 13,000 people over the course of five years at the Saydnaya prison near Damascus.

The report “puts into question the credibility of Amnesty International,” Assad said, noting, “It’s always biased and politicized. And it’s shame for such organization to publish a report without a shred of evidence.”

Earlier, the Syrian Justice Ministry had strongly dismissed the Amnesty International report as “inaccurate and politically-motivated,” stressing that such a bid is meant to ruin the Syrian government’s reputation in international bodies.

The ministry, in a statement published on Tuesday, emphasized that writs of execution are issued in Syria only after due process of law.