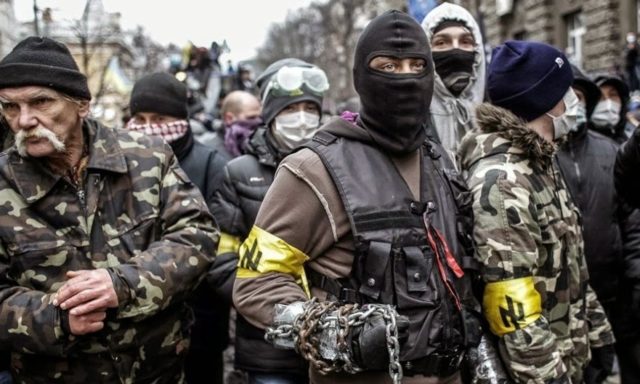 Who is Killing the Commanders?

[ Editor’s note: These Kiev assassinations are being done to provoke the Donbass Republics into launching an offensive. That they will not do, preferring wisely to save the lives of their soldiers and their military strength to defend against the steady stream of Ukrainian army and militia group attacks.

They are betting, and we hope wisely, that the Western public will eventually wake up to the disaster the U.S.-EU-NATO neo-Cold War foreign policy with Russia has been. To use the long suffering Ukrainian people as cannon fodder in a proxy war with Russia was certainly exceptional, but not in the way that Obama claimed.

It was exceptionally cruel and immoral, and in violation of a number of international laws, including the terrorism one, oh yes, that, too… and from Mr. Nobel Peace Prize himself. Obama will never wash off that stain, or that of the Syrian mass murders we inflicted.

The Donbass security people need to get their act together on basic security, as getting a bomb inside a secure facility like this shows they have been infiltrated. They will have to segregate their top commanders and their families now, or Kiev will keep picking them off until the people lose faith in their ability to even control their own facilities from bomb plantings.

We wish them well in this endeavor, as they have suffered long and hard to have Kiev’s boot, and that of the West, removed from their necks. When this is all over, we will need to look into those responsible for this terror campaign to be punished accordingly for their crimes. It cannot bring back the dead, but it will at least deter them from killing more.

Cmdr. Mikhail Tolstikh (nickname Ghivi) is being buried today. VT salutes him, his comrades, and all those in Donbass fighting for their freedom from the Western-backed Kiev coup — a war crime, and an act of terror larger than 9-11 actually — where the only people punished have been the innocent victims; yet, the perpetrators walk around free, with this strange concept of exceptionalism floating around in their heads… Jim W. Dean ]

I remember when this war got started, Jim and I talked about having a series of stories about Novorossiya to introduce them to VT readers.  Unfortunately, our newspaper format won’t let us do it, and now we are talking about those who became a legend during their life after they are gone.

“Ukies” do not have such heroes as Donbass because who could be they proud of, maybe those “fighters” who arrived in Donbass to kill, rape and rob? So then, whose names will we cherish in our memories…the commanders who gave the orders to attack civilian areas with Grad and Uragan?

Cmdr. Mikhail (Ghivi) Tolstikh was killed in his office, located on the 2nd floor of a sturdy five-story headquarters building, with a one-time shot from the detonation of a powerful shell. The Russian writer Zakhar Prilepin commented on this targeted killing with the following words:

“They can’t do it in combat, this is only the way they can. So, rejoice, you beasts-jackals. Our neighboring state is controlled by ghouls, who are completely devoid of ideas about valor and honor. That’s how they paid back for the failure of their infamous avenged attack. It’s only the way they can”.

It was very sad that during my visit to Donbass I left earlier than I had planned, and my interviews with Ghivi and Motorola were overtaken by events.

…. and from the Saker

This is one of those times when I sincerely wish I had been proven wrong and that those who criticized me for raising the alarm following the murder of Motorola had been proven right.  Instead, one of my worst fears has now materialized: Lieutenant colonel Mikhail Sergeyevich Tolstykh, aka “Givi” has been murdered.

That’s what you get for not asking the hard questions and for stupidly denying that there is a major problem.

Frankly, I am too disgusted to write a personal analysis.  Besides, Colonel Cassad has already said everything which could and should be said at this point in time.  All I will do is offer a translated summary of his main conclusions:

Bottom line: this is totally and completely inexcusable.  The RPO-A has a range of about 150-400m (depending on the actual kit and the proficiency of the operator) and to strike Givi’s office the killers must have had direct line of sight.  As far as I am concerned, many heads should now roll, especially after the murder of Motorola which should have served as a very painful wake-up call to the shameful reality that DNR counter-intelligence and security is clearly completely dysfunctional.

At this point in time I am also inclined to blame Russia for not having stepped in following the murder of Motorola and restored a modicum of security in the DNR/LNR.  And to those who will accuse me of overreacting, I will ask a simple question: what would it take for your to admit that there is a problem – do you really want to see Zakharchenko killed next?

As to the “who done it?” question, I am now revising my evaluation of how hard it would be to mount such an operation downward and I am beginning to think that the Ukronazis might actually be behind it.  Initially, I had dismissed that option due to the notorious incompetence of the SBU and the rest of the Ukronazi terror organizations, but now I am starting believe that the “incompetence” of the Ukronazis, especially if trained by western operators, might be favorably compared to the “competence” of the DNR/LRN security services.

I will conclude this post by repeating what I wrote when Motorola was killed: The real question is not who had the means to execute such an operation, but why would anybody at all have had the opportunity to do so?!

With the Saints give rest, O Christ, to the soul of Your servant Mikhail where there is no pain, nor sorrow, nor suffering, but life everlasting.