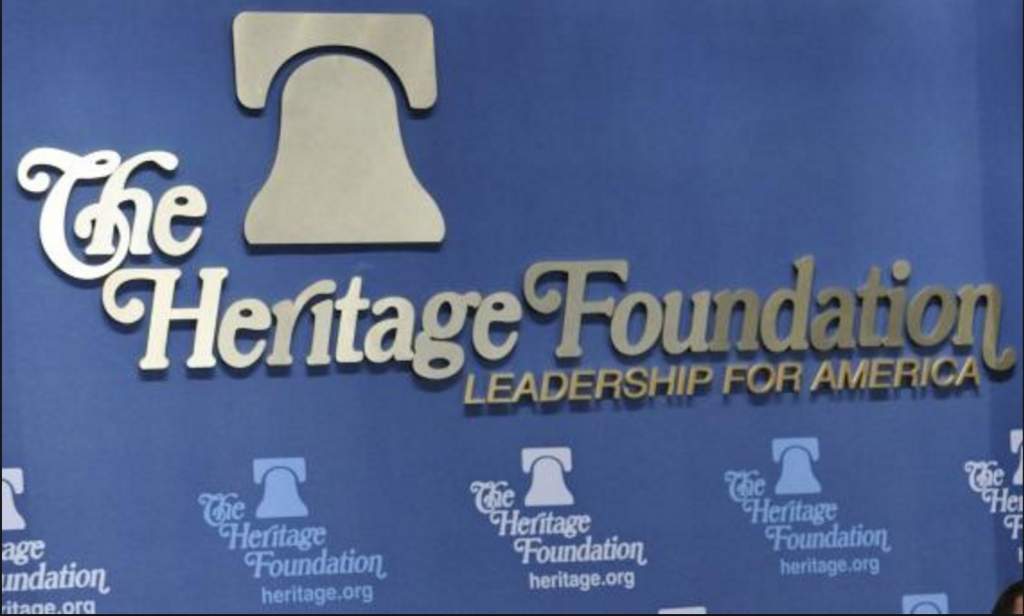 The two leading US think tanks namely ‘Hudson Institute’ and the ‘Heritage Foundation’ have advised the Donald Trump administration to adopt tough measures against Pakistan. In their view Pakistan is not doing enough in controlling terrorism and is making its soil available for export of terrorism into Afghanistan, thereby threatening the US vital security interests in the region.

They have suggested a critical review of intelligence on Pakistan’s involvement in supporting terror since in their view the previous administrations have been taking a lenient view. In their estimation, Pakistan is not an American ally and has been playing a double game by cooperating occasionally and partially.

In their recommendations they have stated that Pakistan must be firmly asked to fully share the US counterterrorism objectives, end its support to the Afghan Taliban and Haqqani network (HN) and given stern warning that failure to do so would deprive it of the status on non-NATO ally within six months and result in declaring Pakistan as a State sponsor of Terrorism.

In their assessment, China and Gulf Arab States share the US concern about Pakistan’s tolerance of terrorist organizations/individuals. They hasten to add that Pakistan being an important country should also be induced by offering a mutually beneficial trade and investment package, while continuing humanitarian and social assistance programs.

It is a well-known fact that there are 1984 think tanks in USA with 350 in Washington. Both Heritage and Hudson are among the 50 most influential think tanks. Other important ones are American Enterprise Institute, Centre for Security Policy, Foreign Policy Research Inst, Institute of Foreign Policy Analysis, Brookings Inst etc.

These institutes are required to provide research solutions to a variety of world problems and then lobbying for policy changes. Perceptions are built and the US policy makers influenced to formulate foreign policies or make changes in policies, and frame responses to external challenges.

These intellectual institutes are however mostly controlled by the Far-Right Zionist lobby which is pro-Israel and guided by American Israeli Public Affairs Committee (AIPIAC). Of the 30 top executives of the major think tanks, 19 are Jews (63%), whereas Jews are mere 2% of the total population. 94% of American Jews live in 13 key Electoral College State, who play a predominant role in the election of US president.

It is therefore quite logical to assume that like hundreds of anti-Pakistan reports dished out by the US think tanks, US Congress, New York Times, Washington Post and Voice of America, this report was also manufactured by these lobbies that are hostile to Pakistan. Purpose is to influence the new administration to pursue old policies to keep Pakistan in the dock.

Rather than focusing on foreign policy and security issues, these think tanks work on tutored themes and burn midnight oil in justifying the crimes of USA, Israel and India against humanity, painting the targeted Muslim countries particularly the radical groups in black and blaming the victims of aggression as terrorists or sponsors of terrorism.

Pakistan has been the biggest victim of Indo-US-Israeli propaganda since 2005. Since none of the sinister objective against Pakistan could be accomplished through covert means, the propaganda continues unabated and this report is in continuation of the malicious campaign.

I may like to ask the wise guys of the two think tanks some probing questions:

Whether their counsels helped USA in winning the war on terror, or at least in improving their image. If not, have they ever prepared a paper highlighting why the US has failed to achieve its stated and hidden objectives after fighting the longest war in its history and spending over $ 1 trillion, where the US went wrong and how could it make amends to restore its lost prestige. (I have).

Instead of the next door neighbor Pakistan feeling insecure, how come the US located 7000 miles away and across the seven seas feel threatened by the chaos in Afghanistan which it had intentionally created?

I want to know as to what are the accomplishments of the US-NATO forces and in what way they have fared better than Pakistan to ask it repeatedly to do more? In my reckoning, the US need to do a lot more.

Can the US deny that CIA in league with RAW, NDS, MI-6, Mossad and BND been exporting terrorism into Pakistan since 2003 with the help of its proxies created in FATA, Swat, Baluchistan and Karachi? Can it deny that RAW and NDS are still supporting them?

Why the ISAF withdrew bulk of 1, 30, 000 troops from Afghanistan in December 2014 without eliminating its principal objective of eliminating terrorism?

Was it because of resurging Taliban power which it couldn’t defeat, or the sagging morale of ISAF soldiers due to mounting war casualties, suicides, in-house attacks, huge number of post stress disorder cases and uninspiring military leadership?

Isn’t it true that the morale of occupying forces drawing handsome salaries drooped because they had no cause and that they were fighting a wrong war for selfish motives of the elites?

When the US accepted in principle that the Taliban could neither be defeated on the battlefield nor cowed down and decided to quit Afghanistan by December 2014, what was the need for keeping behind a token force along with airpower? Did it really expect that what the combined military force of 48 countries couldn’t achieve, would be accomplished by ANSF rived in so many discipline problems?

Isn’t it a fact that rather than accepting defeat in good grace and quitting honorably, the US military brazenly blamed Pakistan for all its failures? Can the prestige and honor of the sole super power be restored by making Pakistan a scapegoat?

Pakistan security forces and ISI on the other hand successfully broke the back of terror network and demolished all the sanctuaries, communication and command infrastructure from FATA and settled areas of Khyber Pakhtunkhwa, enfeebled foreign backed separatist movement in Baluchistan and demolished the militant structure of MQM in Karachi. All this was done single-handed against all odds and astounded the world. USA is among the ones acknowledging Pakistan’s spectacular successes.

If Pakistan had fought the war with ill-motives and without a genuine cause, could it have achieved the miracle?

It is now an open secret that the US had occupied Afghanistan under a preconceived design and with sinister objectives against Pakistan and other regional countries. It has been calculatingly inflaming terrorism in the region and particularly in Pakistan and at no stage made any sincere effort to quash terrorism.

Had the US been sincere and serious in eliminating terrorism as professed by George W. Bush and his successor Barak Obama, it would have made Pakistan its strategic partner and banked upon it based upon its astounding performance in the war against the Soviets in the 1980s.

The US relied upon India which has nothing in common with Afghans and is a far distant neighbor. Driven by acute animosity against Pakistan, India kept pressing US military to focus on Pakistan rather than on consolidating its gains in Afghanistan. Gen Mc Chrystal, Gen Petraeus and former Secretary Defense Chuck Hegel publically declared India as a problem child.

Wasn’t it a big mistake on part of the US to sideline the Afghan Pashtuns that are in big majority, and instead rely upon minority Tajiks, Uzbeks and others in Northern Alliance and unpopular and inefficient regimes of Karzai and of Ghani?

One may ask as to why the US has been striving hard since 2011 to have dialogue with the Taliban who are supposed to be the foes and are still vying to make them agree to talk? And why Pakistan is being asked to stay away from them? Concept of good and bad Taliban is the brainchild of USA and not of Pakistan. In its view, all those agreeing to talk are good and those refusing to talk are bad.

Since 2008, the Taliban are constantly gaining ground in Afghanistan and are striking targets in all parts of the country including Kabul and northern and western parts. Their resurgence became menacing after 2014 and coming spring offensive will prove highly perilous for the unity government in Kabul and for the 3, 50,000 ANSF supported by 12000 Resolute Support Group that have failed to stem the tide. So how come Pakistan is responsible for their dismal performance particularly after it cleared the last stronghold of North Waziristan in 2014 where HN was based?

The US has been suspecting and distrusting Pakistan from the outset since it was never made an ally. Marked as a target, friendship was a ruse to deceive Pakistan, make it complacent, weaken it from within through covert operations and then extract its nuclear teeth at an opportune time. This feat if achieved would have justified its most expensive Afghan venture. So who has been playing a double game??

Rather than learning lessons from past mistakes and blunders and taking corrective measures by working out a face saving formula, the two think tanks have suggested the same old remedy which will prove counterproductive.

Pakistan has been kept on the leash all these years. So, what tough measures are now being suggested? The threat of declaring Pakistan a terrorist state, or to make the financial assistance condition based, or drone war are coercive tools in use for over a decade.

What is so new suggested by the sages and that too at a time when Pakistan has weathered all the pains, its armed forces are fully battle inoculated and have proved their mettle, its nuclear and missile programs are vibrant and in safe hands, it has overcome its energy and economic crisis, it is no more isolated, it is a coalition partner of ascending power and has other options as well?

On the other hand, USA is a declining power ruled by controversial, unpredictable and unpopular president, annoying everyone including the Americans other than the most detestable Israel and India. How has the Trump administration responded to Iran’s tough response? It is on a weaker wicket to threaten nuclear Pakistan.