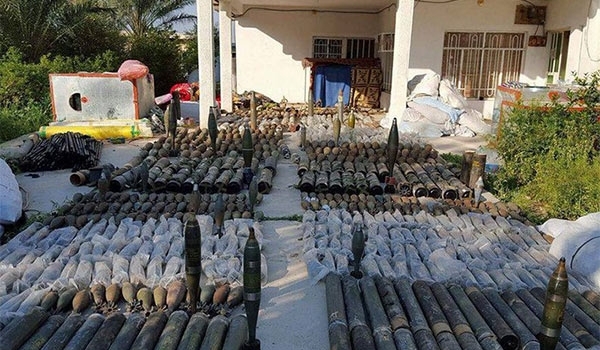 Editor’s note:  Video by Shia militia fighting in Mosul.  Victim is Tunisian ISIS terrorist(s) brought into Iraq by either Erdogan or by plane into Saudi Arabia and by truck across the border with the help of Sunni official in Iraq who still work closely with ISIS as I found when I met with them in January 2014.

Time someone started telling the truth.  Enjoy the videos. This is war and all of it was carefully engineered by the Bush neocons and will go on for another generation, financed by Saudi Arabia and aided by Tel Aviv and, depending on what day of the week you have, Turkey as well.  We aren’t forgetting the Gulf States.g

TEHRAN (FNA)- Iraq’s Defense Ministry said in a statement on Monday that the country’s security forces have taken control over six large missile-manufacturing workshops of ISIL terrorists West of Mosul city.  Below the arrest but not execution of another Saudi paid mercenary.

The ministry’s statement said that the Iraqi forces managed to seize six large workshops of ISIL in al-Karameh industrial zone on left flank of Mosul.

The workshops were used by the ISIL terrorists to manufacture different missiles, including Hell Missiles.

The statement added that ISIL had been making also Katyusha missiles, 60mm and 12mm mortar shells and different bombs in the six workshops.

On Saturday, Kata’ib Sayed al-Shuhada popular forces repelled an attack of the ISIL group, West of the city of Mosul, killing  10 members of the group.

“Kata’ib Seyyed al-Shuhada fighters fended off a terrorist attack by the ISIL on the area Tal Abta,” the popular forces said in a press statement, Iraqi news reported.

“The fighters killed ten members of the ISIL, as well as burning three vehicles. One member of Kata’ib Sayed al-Shuhada was killed, while two others were wounded in the attack,” the statement added. “

In January 25th 2017, Iraqi Prime Minister Haider al-Abadi announced that security forces fully liberated the Eastern side of the city of Mosul.