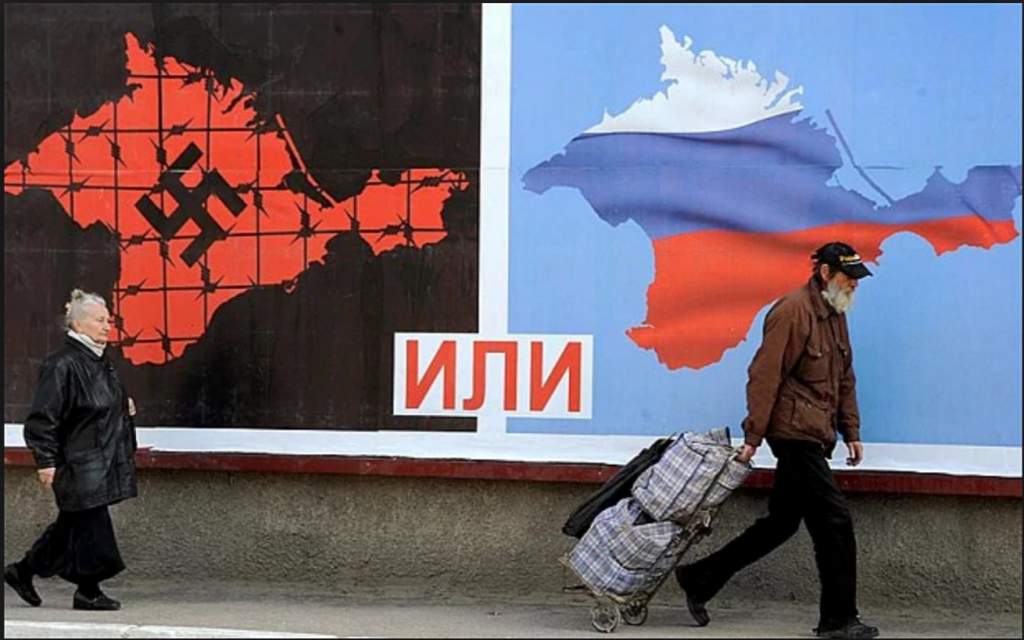 With all of the fears surrounding Russia and espionage of Russia, are we blowing this whole issue out of proportion to ignore the real elephant in the room, fascism and a Far-Right agenda operating in Ukraine and elsewhere?

Today “President Trump has made it very clear that he expects the Russian government to de-escalate violence in the Ukraine and return Crimea,” said White House Spokesman Sean Spicer at the daily news briefing. “At the same time, he fully expects to and wants to get along with Russia.”

With the ongoing media outcry yesterday over Michael Flynn’s contact with Russia and a hyped media Russian threat that went on all day yesterday, it is important to understand, what are we afraid of? Old, Cold War era KGB (now FSB) operatives controlling our government? To what extent would they control us, if they even could? Would they curtail free speech, freedom of assembly, revoke our constitutional rights, manipulate us to where corporations and elite “oligarchs” have more control than the people in a “free society?”

So what of the Russian threat to us? All of the above is already happening and has been moving towards these goals and objectives since the Bush Administration and 9/11/01.

With every Trump cabinet pick and ever executive order, the American people themselves are in more fear of being controlled by the Deep State. It is like a horror movie where the villains are put in charge.

Where else have we seen this?

Ukraine for one. Looking at what happened in Ukraine, the coup of the Viktor Yanukovych government, which to be fair was corrupt financially, as many developing countries are, still, the US paid $5 billion to sponsor basically a color revolution/coup so that corporate interests could potentially take the best, most industrial part of Ukraine, Eastern Ukraine. Victoria Nuland’s speech in December 2013 was an ominous warning of the path that would be taken towards this. Some of the people who were put in power after the coup were closely allied with the Far-Right, and quasi Neo-Nazis, members of the Right Sector, currently hold positions in the government of Western Ukraine, the side we supported.

At the time of the coup, Yanukovych was working on the best course for the country financially which had received loans from Russia and was also promised loans from the EU that were tied to austerity which could cost the Ukrainian people their sovereignty. It would have been nice for the West to work together with the East to create a balanced approach on Ukraine and enable their membership in both the Customs Union and the EU allowing the country to be a bridge between East and West, however the extremists won and division was created in Ukraine, as laws punishing Russian speakers spewed out of the Verkhovna Rada, Ukraine’s Parliament.
Crimea voted to become part of Russia out of fear of the Far-Right Nationalists. The minority Tartars did not agree, but with the majority of Crimeans 96.8 percent voted to declare independence from Ukraine and on March 17, 2014 formally applied to become part of Russia following the referendum, self-determination prevailed. Why is self-determination wrong when it leans towards Russia? Crimea was a part of Russia that was given to Ukraine in 1954. If the OSCE, Organization for Security and Cooperation in Europe, would go to Crimea and interview the majority of people in Crimea, they would find that they indeed voted to be part of Russia out of fear, not of Russia, but out of fear of the Far-Right Nationalists in the government of Ukraine.

Again, why is self-determination wrong when it leans towards Russia? Why are we in the West so afraid? Why do we feel we can take over countries who lean towards Russia? Are we afraid of, the Bolsheviks that were fostered by Wall Street and enabled by President Woodrow Wilson?

Are we afraid of the old school KGB spying? What is their goal that we are afraid of? Is it totalitarianism and manipulation? Is that not what has been occurring in the US since 9/11/01, a move in the US towards totalitarianism against the backdrop of manufactured enemies, never facing the real creators of the enemies, never following the direct lines to identify the perpetrators. Wrong doing is being lied about, tolerated, allowed, condoned, accepted, validated and even honored at times as we set out to “fight” that same wrong doing. Thinking of terrorism, it is known by all to be an extension of Wahhabism, yet the country that has state sponsored Wahhabist mosques, Saudi Arabia, was given an award for fighting terrorism.

So back to Russia. What are we afraid of? Is it that we are attempting to create a unipolar world where we fear if Russia, China and even the EU are competitive with us, we will not be able to dominate the world and create villains and victors? Who is it that is creating a totalitarian system, one of a global scale, all encompassing leadership and having the right to control the narrative about anyone or anything, not allowing for discourse and diplomacy as well as a balanced approach seeing all sides and aiming to achieve balance? This view of superiority fits well with the Nationalistic side and the Far-Right agenda, and it is void of everything that has made America great.

Why is America violating its own ethics, laws and social mores to achieve this? Who are the players? What is hiding in the background, the Deep State?
Thinking about Nikki Haley’s words at the UN, chastising Russia in the UN for aggression in Ukraine, she and others conveniently overlook the Far-Right Nationalists operating there, which are the main issue of contention for those of Eastern Ukraine and Crimea, and are why they would ask Russia for support.
Is this administration a culmination of a long term plan towards a unipolar world based on Far-Right Nationalism used to control the masses into submission? That is pure fascism, if so. Why is Russia standing by, interests? Or, has their government been working towards a the same outcome supporting the back channels? Perhaps that is what we truly fear. We need to remember who was our ally in WWII. And then maybe think of the Nazis who came into the US after the war from Argentina and elsewhere.

Looking back at Ukraine, and adding in Syria, Russia’s fight against ISIS, our fears may be unfounded despite the rhetoric once we are willing to acknowledge what has been done to foment war for power and control of resources, including our tax payer dollars used to support at times illegal and fraudulently based wars such as Iraq and Libya.

The threat is not Russia, it is our inability to see what is right in front of us when we look in the mirror. For once, can our UN Ambassador acknowledge the damage done by the Far-Right Nationalists, the Right Sector, we partnered with in Ukraine? If this administration is really going to make peace with Russia, this needs to happen.