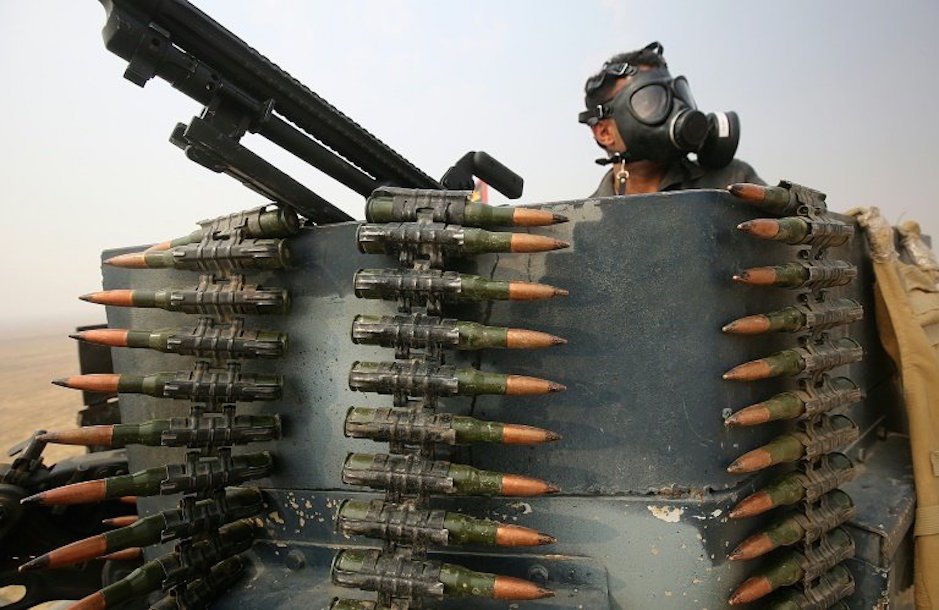 [ Editor’s Note: Trump Tweeting has pushed Mosul virtually out of the news, along with many other things, like Libya, Africa, refugee camps in the EU, MH-17, and all the other unfinished pieces of business. Mr. Trump is a New Yorker, but his long list of changing the world and setting it right did not include 9-11, not one word. I have one word: “Giuliani”.

So when I saw Berger’s Mosul piece and found it to spotlight the huge casualties the Iraqis have taken, 30,000 just for Mosul alone, it was time to play catch up for the unknown lost souls there. The 30K does not include all of ISIL’s executions. Mass graves are still being found, as the government takes more territory.

While the follow up attack on West Mosul seems to be delayed, I was thrilled to see that units have been deployed to not let retreating jihadis walk or drive away from the battle. It seems that the lessons of “pushing them out” of places just to have to fight them again in a new place has sunk in as a false victory.

You can only beat these people by killing. Every jihadi that escapes will be able to go back home and recruit a new batch of cannon fodder to replace those that were lost. The popular militias seem to have been given this interdiction job, as plans are to use them for border control when Mosul is over.

The days of jihadis flowing around like tourists in Iraq might be over. And discussions have come out regarding sending them to Syria to exterminate jihadis there, likely Deir Ezzur first, and take control of the borders to stop the Gulf States from funding a long-lasting guerrilla war by constantly filtering new meat over the borders to torment the Syrians for not accepting the Sunni boot on their neck.

I found one video below to honor the Iraqi fighters, captured drone footage that IS made of a lot of its armored car and truck bombers, which was their main weapon against the armored formation leading the attack into Mosul and who took huge casualties. The Iraqis are winning, but at a terrible price… Jim W. Dean ]

[ Editor’s Note will be crowd funding via PayPal during 2017 at:  [email protected]
Research, field trips, databasing Heritage TV’s archives, and more – Thanks for helping out ]

Mosul is the second most populated city in Iraq and mainly inhabited by Sunnis. It fell under ISIS’ full control back in June 2014, largely due to the deep mistrust that the indigenous population had towards the Shia government of Iraq. It is in the Great Mosque of Mosul that ISIS’ leader Abu Bakr al-Baghdadi announced the establishment of the so-called caliphate, that according to his vision, would extend its reach across all of Syria and Iraq’s territory.

For some time now, Mosul has remained the principal stronghold of ISIS, therefore Washington would often refer to that city as “the capital of ISIS”. This was done under US President Barack Obama, later announcing an assault on this city during Hillary Clinton’s election campaign, and was presented as a major goal for the US to achieve.

The active phase of the operation that aimed at liberating Mosul was initiated by the Pentagon on January 21, 2015. A total of 9,000 ISIS militants were entrenched in the city and instantly surrounded by the 60,000 strong Iraqi army.

It should be noted that this impressive force was composed of different units, including 6,000 Peshmerga fighters and up to 10,000 Shia militia fighters backed by Iran. This force was supported by an international coalition force, which included up to 5,000 US soldiers, 3,000 other NATO servicemen and a total of 500 French troops, not including air support.

However, in spite of Obama’s bold statements, announcing the city would be liberated long before the US presidential election, the massive coalition force failed to fulfill this goal. Even the “colorful” name that was given to this operation by the White House – Fatah (from the Arabic – “he who opens the door”, one of Allah’s 99 beautiful names) didn’t help.

Just the other day, a commander of US-led anti-ISIS international coalition forces, General Stephen Townsend, stated that Mosul would be recaptured from terrorists in the next six months. Before that he was convinced that Mosul would have been liberated by February.

The eastern part of Mosul was declared a “fully liberated” zone in the past month. Then all the fighting in the city stopped. An attempt to recapture the western half of Mosul is bound to begin in the next few days, as it’s been announced by Townsend. Townsend has also noted that nothing will end once Mosul is captured, since the international coalition has not fulfilled all of its designated goals in Iraq. He is convinced that the coalition force still needs to wipe out the militants that are occupying about one third of the Euphrates Valley.

However, the price that the coalition has paid during the liberation attempts seems catastrophic.

Even if we are to believe the data provided by the coalition forces, the attackers have lost a total of 30,000 men killed and wounded, while the losses suffered by ISIS are simply incomparable. The coalition is convinced that their assault on Mosul resulted in the death of no more than 1,300 ISIS militants. The better part of the terrorist forces have moved to the western part of the city or simply “vanished” amid the civilian population.

Even though Barack Obama was initially convinced that local armed forces would be able to overcome ISIS resistance, while enjoying limited US military support, it’s obvious that US special forces are becoming increasingly involved in the fight against ISIS, as evidenced by their rapidly increasing losses.

For example, last October alone a total of 16 US servicemen were killed in Mosul, while another 27 special forces operatives were wounded.

Hundreds of deceased civilians should also be added to the price paid for the liberation of Mosul. Thus, according to the statements of the UN coordinator in Iraq, Lise Grande, up to 47% of all the wounded men in Mosul were civilians, while on average this number rarely exceeds 15-20% in armed conflicts. In the last week of December, a total of 817 men were injured, while in early January, this number grew by another 683 people.

It must be noted that the way Washington has been waging the war on ISIS, with the use of “natives” as a main assault force, has already undermined the positions enjoyed by the United States in the region. The war against ISIS is gradually being transformed into a Shia’a vs Sunni religious struggle, which leads to Iran becoming even more involved in the south of Iraq and in Baghdad. However, Washington, in spite of the continuing sanctions against Iran, is forced to turn a blind eye to this fact.

The reason presented to US servicemen to motivate them amid the fight,  revolves around stopping “absolute evil,” but with little effect. American soldiers were quick to learn that they are just killing local “savage men” which turns the Mosul operation into an episode of yet another Western colonial war. It’s hard to blame them for their reluctance to sacrifice their lives for this cause.

The events of 9/11 were used as an excuse by the Western elites to wage wars “for national interests”, forcing the public to believe that the aggression against Iraq and Afghanistan was a purely defensive fight. However, the reality was that young men were sent overseas to fight in colonial wars. All this resulted in a new mobilization of the Islamic World which has always had a huge surplus in human resources.

As international analysts note, all these facts show the utter and complete failure of Washington’s policies in Iraq, and in the Middle East as a whole.