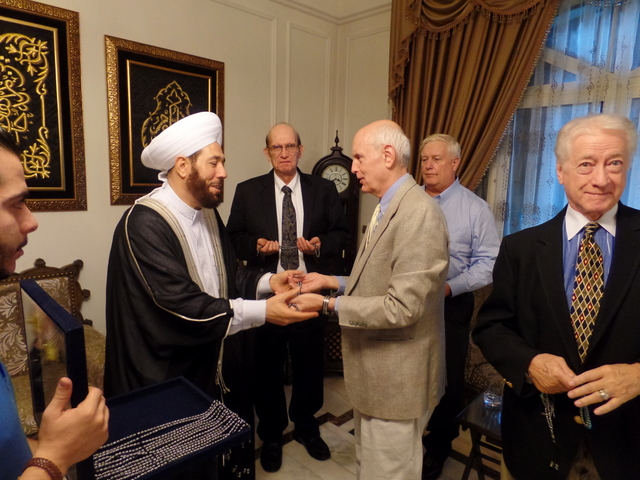 [ Editor’s Note: The Mufti was the real deal, and no he didn’t fool us. People at his level are not difficult to learn about when they are public and accessible…sort of, in his case. Because he was a “multi-faith” Muslim, he was hated by the Wahhabis and placed under a death sentence, so he had heavy security, the kind you need when you are a truck-bomb target.

He has huge support in Syria for his passionate advocacy for saving the Syrian people from the terror war inflicted on it by the West, Israel, the Gulf States, and even Turkey.

They are all in the game to get a piece a Balkanized Syria, or what was left of it. Turkey got a head start, by stripping Aleppo clean of all its industry and trucked over the border for sale at special prices, I am sure, to the Erdogan party faithful.

We have just bare bones news on the attack today, and will be updating as we learn more. Russia could be on the spot here, if it was a drone killing, and if they do not release the details of their radar and satellite tracking. Nothing flies over Syria that both Moscow and NATO don’t see and know where it took off from and returned.

Being tired from doing this work is normal, because it is endless. If this were a retribution killing — a response to the progress of the Astana talks and with the Geneva ones around the corner, an attempt to poison the peace effort by killing the Mufti’s family — then that would be very disappointing.

Our condolences go out to the Mufti, but we cannot say to his immediate family also, because he doesn’t have one anymore. But Syria has always been his family. When the Takfiris started targeting the Christian churches, to show solidarity with them and to refute the fomenting of a religious war, he sent his imams out to hold prayer vigils in Christian churches.

This of course put them all on death lists, too. The Mufti is the kind of man who can ask people to do this, and they will. This conflicts 180-degrees with the propaganda image the Israelis have tried to tar him with. Many Syrians have lost families in this proxy war against Syria. The Mufti now shares their pain more than he ever expected to.

We will continue to work, as always, to find and spotlight those responsible, in the hope that some justice might be brought… Jim W. Dean ]

Grand Mufti of Syria, Ahmad Bader Hassoun, said Turkish warplanes killed 18 members of his family in, wives, children and the even his father.

Two weeks ago, Human Rights Watch accused Ahmad Bader Hassoun, the Grand Mufti of Syria and primary defending of Christian communities throughout the Middle East of personally ordering the hanging of 30,000 prisoners being held at a single prison outside Damascus.

[ Note: I chose the video below for its quality, a PressTV shoot, and he covers a lot of ground on the issues that Western media stays away from. The Mufti was such a skilled ambassador for the Syrian people, all of them, that the terror sponsors lined up against Syria refused him visas to promote his peace message. Ireland has been the only exception.]

Now it is revealed that the Human Rights Watch accusations were based on fake reports, and when this ploy failed, another one materialized, this one requiring White House approval for a targeted assassination attack on the family of a religious leader, a new all-time low, even for the United States.

Two weeks later, in what is a suspected US drone attack, held during Turkish raids in the region, the family compound of the Hassoun clan was obliterated, with 18 dead, in what has to be characterized as a targeted terror attack on Syria’s most beloved cleric and a known enemy of Israel and Turkey for his criticism of their persecution of Christians.