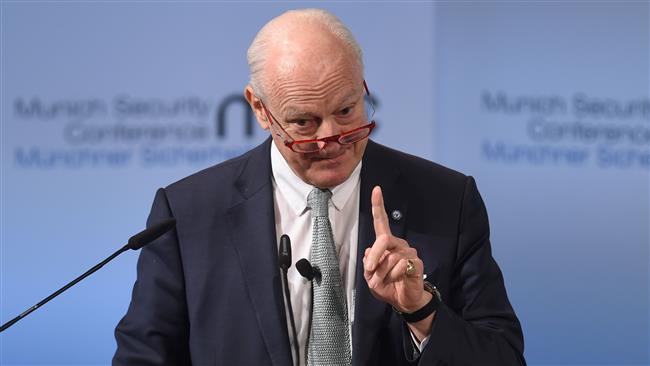 United Nations Special Envoy for Syria Staffan de Mistura has questioned the role of the United States and its so-called military engagement against terrorist groups in the Middle Eastern country, saying Washington’s new administration is still working on its conflicting priorities in tackling the six-year-long crisis.

De Mistura made the remarks in the 53rd Munich Security Conference, an annual gathering of top diplomats and defense officials, on Sunday, the last day of the summit and just four days ahead of crucial peace negotiations on Syria in Geneva, Switzerland.

He further said that US President Donald Trump’s administration is stuck among three incompatible priorities in tackling the conflict, which include its so-called war against Daesh Takfiri terrorists, “how to limit the influence of some major regional players, and how not to damage one of their major allies in the region.”

De Mistura added that Trump needed to decide whether he was interested in just fighting Daesh or defeating the Takfiri group.

The UN special envoy also wondered how the White House was going to “square this circle,” adding that Washington was practically absent in all efforts devoted to settle the crisis politically. “Where is the US in all this? I can’t tell you because I don’t know,” he said.

Under former US President Barack Obama, the White House insisted that Syrian President Bashar al-Assad had to be ousted, making it at odds with Russia, which firmly supported the Syrian leader and launched its military campaign against Daesh and other terror outfits in Syria at the Syrian government’s request in September 2015. Moscow has also called for an end to demands for the removal of Assad.

De Mistura also stressed that the ultimate resolution of the deadly conflict could be achieved only through an “inclusive” political solution.

A fresh round of UN-led negotiations is scheduled to be held in Geneva on Thursday, involving the Syrian government and representatives from armed opposition groups.

Furthermore, Iran, Russia, and Turkey in late last year proposed to mediate new talks in Kazakh capital, Astana, between the Syrian government and opposition groups. The talks were organized and held in Astana in January this year. They were followed by technical talks attended by experts from Tehran, Moscow, and Ankara in the same city earlier in February.

Elsewhere in his remarks, De Mistura said that the Astana talks and the truce agreed created an opening that should be explored, but he warned that “even a ceasefire with two guarantors can’t hold too long if there is no political horizon.” He said any political solution had to be comprehensive to be credible

The UN envoy stated that Astana talks focused on cessation of hostilities, while Geneva negotiations must see if there is any window for political talks.

Syrian army troops and allied fighters have been fighting different foreign-backed terrorist groups wreaking havoc in the Arab country since 2011. Damascus blames the six-year-old militancy on some Western states and their regional allies, including Qatar and Saudi Arabia.

De Mistura estimated in August last year that more than 400,000 people had been killed in the crisis until then. The UN stopped its official casualty count in the war-torn country, citing its inability to verify the figures it received from various sources.

Over the past few months, government troops have made sweeping gains against Takfiri terrorists, who have lately increased their acts of violence across the country following a series of defeats in Aleppo and elsewhere.