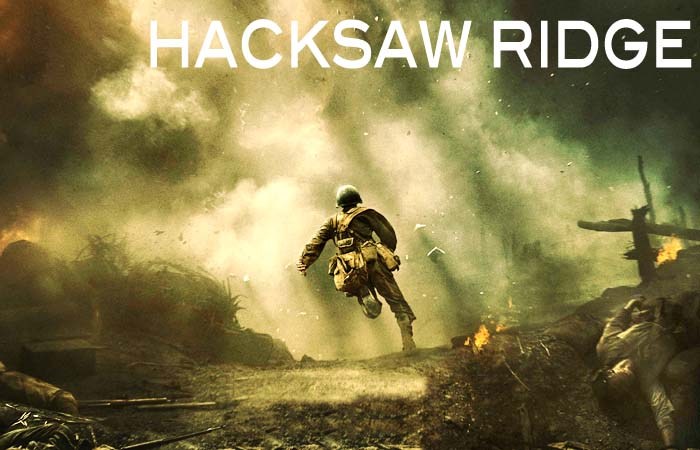 by  Jim W. Dean, VT Editor, … and all those who contributed to making Hacksaw Ridge

Update 02-21-17 8:49 pm – We had a wonderful two hours with both Terry Barlett and Woody Williams and will be posting the show links and a follow up article in a day or so…JD

Tuesday night, February 21, from 6 to 8pm EST, we have a double-header Mike Harris – Jim Dean VT Radio special, hosting the BluRay-DVD release of Mel Gibson’s Hacksaw Ridge, which has been nominated for six Academy Awards, including best picture.

This is the incredible story of Desmond Doss. He was the WWII conscientious objector who refused to carry a gun, and who dragged 75 men off an active battlefield on Okinawa, rope-winching each of them down a cliff to awaiting medics. For this, he was awarded the Medal of Honor.

Amazingly, he felt his courageous acts deserved no special recognition because he was just doing his duty; so he never had any interest in promoting his story to the general public, but only via his church and the Medal of Honor Society.

But his failing health in his 80’s finally convinced him not take his story quietly to the grave, so he assigned it to his Seventh Day Adventist church to bring it to the world, and to our good fortune.

The first hour our guest will be Terry Benedict, producer of the initial documentary, Conscientious Objector, made while Desmond was still alive. This in itself is a wonderful story on how a documentary was used to lay the groundwork for a future feature film. Terry first met Desmond when he was twelve year old, and fate would bring them back together years later to do his documentary….how most of us first learned about his incredible story.

Terry spent a lot of time with Desmond and was able to interview his fellow soldiers, some of whom had treated him as a coward, and joined in trying to bully him out of his unit. Desmond was eventually charged with failing to obey a direct order to pick up a rifle. He defeated the  court-martial attempt to send him to prison, and was allowed to remain with his unit. This set the stage for his future date with the Medal of Honor, when he became the most famous medic of WWII.

Mel Gibson had a ten-year struggle getting the feature film made, including having to cut the original budget from $80 to $40 million. But he brought in a film that was a long shot, yet one that everyone involved thought deserved to make the big screen.

We hope the film and home media release are successful enough to encourage others to attempt similar productions, so this is not the last. Winning an Oscar could be the big ticket there. I picked a 6-minute 1080p trailer for you below. This is as much a story about a heroic effort to get the movie made as it is about this amazing man who afterward lived his life in relative obscurity.

VT has a soft spot for Desmond Doss and the movie, as we have people who know what it’s like to have laid on a battlefield, wounded, or separated from their unit, pinned down and literally counting their last few minutes, and then have somebody save their ass.

In Vietnam one day an NVA counter attack found our own Gordon Duff 200 yards behind his retreating unit while providing rear cover fire when a two-wheeled 50 cal crew cornered him in an old French cemetery because he was the closest target to shoot at.

He took cover behind one of those flat wide grave stones, listening to the chunks of stone being blown off of the top as those big bullets hit as he was using his nose trying to dig back to Detroit.

Then the horror struck that the 50 cal gunner was mowing the top of the stone down bit by bit to eventually get down to where his head was, and there was nothing he could do… alone, and nowhere to go.

And then, out of the blue, an unarmed, armored personnel carrier rumbled up out of nowhere and stopped beside him, and out of the top popped a bare-chested Marine with his carbine who took a standard sitting position while completely exposed, and with one clip, engaged and killed the gun crew. [ Note: Yes, as a cost saving measure the Marine APC’s had no mounted machineguns on them.]

For the second hour, we will be delving into my Heritage TV archives for the video footage on the only Medal of Honor recipient I have met, Woody Williams, who is the last surviving MoH recipient from Iwo Jima.

Toward the end of the interview, I had wanted to talk about his experiences being in the Medal of Honor Society, which is something the public has not reall y familiar. My main lead in question was to ask him to share some of his memories of meeting the amazing members in the Society back in those days, such as Marine General Vandergrift of Guadalcanal fame, the Black Sheep Squadron‘s Pappy Boyington, and Audie Murphy. These are once in a lifetime moments for an interviewer.

On his own, he drifted into telling me about his being chosen to be the MoH chaplain, taking over from Desmond Doss, whom I had never heard of until I ran across his documentary a few years later. And then Woody gave me another moment.

He paused, reached his hand up and tapped on his Medal of Honor and said that the biggest honor in his life was being chosen as their chaplain, bigger than getting his medal. Woody is a wonderfully active 93-year-old now.

When I interviewed him, he was still doing over 90 events a year, many of them involving a day or two of traveling.

He probably can’t even count the number of events he’s done. Sure, he is the consummate people person, but what oozes out of every pore is his commitment to serve all those who did not come back.

So tomorrow night I will be sharing my stroke of luck in happening to sit down at the only empty seat I could find at a Medal of Honor speaker event for a Vietnam SEAL. When I sat down next to Woody and introduced myself, I did not know that he was the replacement MoH speaker until I saw the medal around his neck.

Sometimes the angels drop things into our laps, and for meeting Woody I am eternally grateful. He will be sharing his story and personal experiences of Desmond Doss to give us more insight into the man, something VT is always digging for.

One last networking note: The invitation to attend this Vietnam SEAL MoH talk came out of the blue. I had called Cliff Judkins to come with me, a Marine Vietnam pilot who had to jump out of his flaming F-8 Crusader over the Pacific one day WWII style because both of his ejection-seat methods failed.

His chute lines got twisted as he tumbled out at 250 mph and did not open fully. He rode a “streamer” down 15,000 feet and hit the water at 90 mph, surviving terrible injuries, but living to tell the story. Cliff is still doing fine, a retired Delta pilot, and he was our guest speaker at our Military Order of World Wars brunch last month.

When we walked into the big dining room, we could not see two seats together. He spotted an empty seat to the right, and me one to the left, so we split up. But for that we would not be doing Woody for the second hour. It was a classic story of opportunity meeting preparedness, and we are happy to share the good fortune.

If you can’t catch the show live, we will of course have this all archived. We will try to open up the phones for callers toward the end of the second hour.