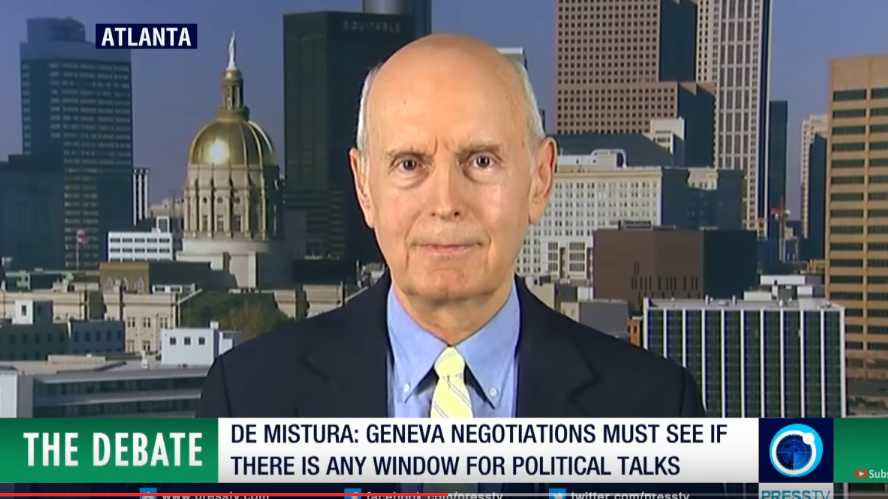 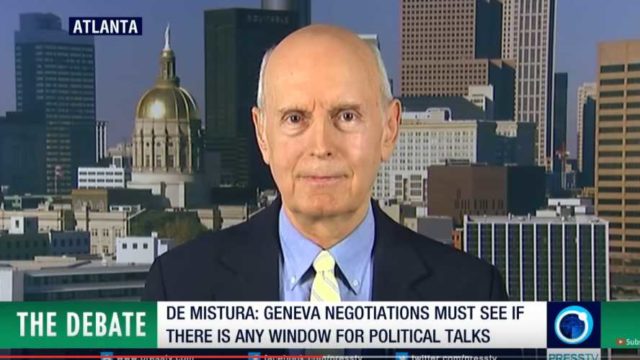 [ Editor’s Note:  I saw something in de Mistura’s comments that no one else did. Sure, the obvious thing was his focus on pointing out that the U. S. had actually hindered all past ceasefires because it did not have effective control over its various proxy ground forces.

He rightfully gave all the success credit to Russia and Turkey for their actually being able to “influence” their respective surrogates to comply. Iran he unfairly ignored in spite if its having supported Hezbollah’s steadfast fighting beside the Syrian Army that played a key role in tipping the tide of the war in the Syrian people’s favor.

But woven into de Mistura’s comments was how the US overtly continued support for its terrorist proxies. The simplest example of that has been US refusal to bomb al-Nusra elements, claiming that would risk killing Free Syrian Army “opposition” fighters mixed in with them. Kerry was acting like we all had fallen off a watermelon truck and had not figured out that their “mixing” was specifically designed to prevent al-Nusra from being bombed.

Why would the U.S. stick its neck out for these murderers? For starters, think about a secret deal the U.S. might have made with Saudi Arabia that, under no circumstances, would the U.S. attack the Saudis’ proxy terrorists if King Salman kept the funding and reinforcements going into them.

The goal there was to assure that Assad would never be able to exert control over the whole country, until the terror supporters found some way to get rid up him and collapse the country into the Balkanized version they could control. You might have noticed how public Assad was recently in his announcing that the Syrian Army would continue fighting until every inch of Syria had been liberated. That was his answer to the Balkanizers.

Staffan de Mistura was challenging Trump not to step into Obama’s shoes and keep this American charade going, with what I saw as a hint that if he did repeat Obama’s patterns, then there would be no choice but to put the issue of member UN states engaging in proxy terrorism squarely on the table as the biggest threat to world peace and stability.

So far the Trump administration is attempting to hang blame for world terrorism on the Iranians, which will go over like a lead balloon, and in effect show that Trump DOES want to step into Obama’s shoes of playing the “good terrorist, bad terrorist” game.

We give Trump credit for his claim to want to cooperate in fighting terrorism, to wipe it out in concert with Russia. But leaving the Iranians out of the deal, when they have done more to fight terrorism than the U.S, and then having the gall to put the terror monkey on their backs, is showing the hand of Mr. Bannon’s holy war against Islam… Jim W. Dean ]

Is the United States really interested in getting rid of Daesh or not in Syria? This has been a question that the Syrian government in the past has posed to Washington, as well as the Russians and the Iranians. However now it is the UN Special Envoy to Syria, Staffan de Mistura, who is posing the question to the US, basically asking Washington to declare its stance when dealing with DAESH.