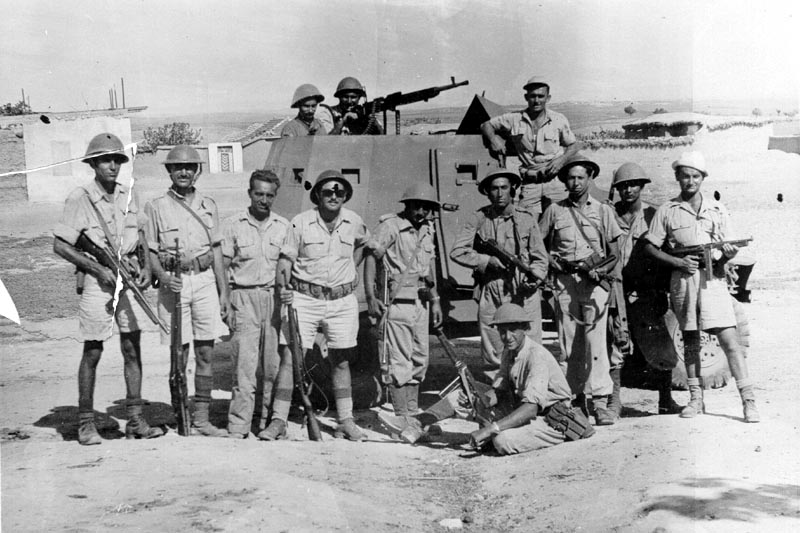 by  Uri Avnery,   …with Gush Shalom

Editor’s note: Uri has another historical retrospective for us on what might seem to be an old and well-beaten topic, “When and who really started the 1948 War?”

This has been a debate-swamp to wade into, not only due to the competing ideologies but also key little details, such as disagreement over when one side first committed to military action to impose its will on the other.

Uri gives a good review of the debate below, and I have only to add to it what the declassified US Intel showed — a topic Uri never touches because he has never had any interest in knowing, or did not like its conclusions.

Steven Green blew the doors off the Zionist 1948-war spin story with his seminal “Taking Sides“, published in 1984, based on the new access to U.S. archives via the Freedom of Information Act. Green’s research turned up a treasure trove of formerly classified material to delve into.

The book was so devastating that some in the Reagan White House were looking for a way to prosecute him, until the idiots were reminded that it would be hard, due to the government having provided the files. So what they did is “reclassify” some of the most damaging material — if you can wrap your mind around that.

Here is the devastating conclusion, which to this day, few are aware has been public knowledge for over 30 years, and yet corporate media and academia have chosen to ignore it.

In March 1948, a Joint Chiefs of Staff paper on ‟Force Requirements for Palestine,‶ anticipating the termination of the British Mandate, predicted that the ‟Zionist strategy will seek to involve [the United States] in a continuously widening and deepening series of operations intended to secure maximum Jewish objectives…

The JCS paper added ominously: ‟All stages of this program are equally sacred to the fanatical concepts of Jewish leaders. The program is opening admitted by same leaders, and has been privately admitted to United States officials by responsible leaders of the presently dominant Jewish group…the Jewish Agency.”

I have published this numerous times over the years and never had an inquiry from the Hebrew lobby looking for additional enlightenment. Green’s book was not a big seller, due to what appeared to be an organized campaign to ignore it. In those pre-Internet days, certain powers could strangle a book by not publishing any reviews in major media.

As Gordon would say, “Welcome to how the world really works”… Jim W. Dean ]

Last week I tried to describe the 1948 war, starting from the shooting at a Jewish bus on the morrow of the UN partition resolution. Some readers dispute the timing. They insist that the war started on May 15, on the morrow of the founding of the State of Israel, when the armies of the neighboring Arab states entered the country.

I have seen this many times. Every serious debate about the Israeli-Palestinian conflict raises the question: “When did it start?” Each side has its own date, proving that the other side started it.

The Arabs started it, the Zionists assert. The conflict started with the “invasion” of the Arab armies. (“Invasion” in quotation marks, since they entered the territories allotted by the UN to the Palestinian Arab state, though their declared aim was to crush the new Jewish state right at the beginning.)

The Jews started it, retort the Arabs. It all started with that atrocious resolution. The UN, consisting at the time mainly of Western and Communist states, gave a country that did not belong to them to the Jews, who did not belong to it.

Yes, say the Jews, but it really started with the White Paper issued by the British in May, 1939, which in effect closed the doors of Palestine to the Jews just when the Nazis were planning the Holocaust.

We had no choice, interject the British. In 1936, the Arabs started a revolt in which Jews and our soldiers were killed all over the country.

But why did we have to do so? cry out the Arabs. Because masses of German Jews were coming to Palestine after 1933, when Adolf Hitler assumed power in Germany. We had to stop it, even by violent means, to prevent Palestine from turning into a Jewish country.

Really, retort the Jews, but you started it long before, in 1929, when you organized riots all over the country, killing lots of Jews. We had no choice, assert the Arabs. The British government of Palestine favored the Zionists and allowed them to settle all over.

That was our right, say the Jews, enshrined in the Mandate conferred by the League of Nations on the British.

Who gave the League of Nations the right to confer a Mandate on anybody? ask the Arabs. The land belonged to its inhabitants, almost all of whom were Arabs. That’s how it all started.

But the Arabs attacked the Jews in 1919, showing how much the British were needed. The British had no business being here, answer the Arabs. The whole mess really started in 1917 when the British published the Balfour Declaration, promising to establish a Jewish “national home” in Palestine, which belonged, at the time, to the (Muslim) Ottoman Empire.

The Ottoman Empire was dying, say the Jews, and the Zionist movement, which was founded in 1896, had already proclaimed its right to Palestine.

But at the same time the modern Arab national movement was born, which had an indisputable claim to Palestine and all the Arab countries.

God has promised… Allah has ordained… And so on.

I have my own theory about when and how the conflict started. In 1904 Theodor Herzl, the founding father of the Zionist movement, died. Herzl did not like Palestine very much, and started his ideological quest with the idea of founding a Jewish state in Patagonia, an Argentine territory which had recently been “pacified”.

Herzl did not like the Turks or the Arabs, but events convinced him that the Jews would go nowhere but Palestine. In his book “Der Judenstaat”, the Bible of Zionism, he declared that the Jews would serve in Palestine as an outpost of Western civilization against the barbarians of Asia – i.e. the Arabs.

One can argue that it was here that the conflict really started – right at the beginning of the Zionist idea. But I have in mind an even more precise moment.

A few years before World War I, the Ottoman Empire showed signs of breaking up. A modernizing movement, led by army officers, assumed power in 1908. They called themselves “the Young Turks”.

Among the restless Arab population, too, revolutionary groups emerged.

They dared not yet talk about independence, but instead put forward a plan for the “de-centralization” of the Ottoman Empire, giving its various nations some autonomy.

A group of Arab members of the Turkish parliament, led by Rukhi al-Halidi (member of a Jerusalem family even now prominent in Palestinian affairs) had a brilliant idea: why not approach the Zionists and offer them an alliance against the Turks in the fight for this idea?

The Zionist representative in Jerusalem hastened to submit this offer to Max Nordau, the new president of the Zionist organization. Nordau had inherited Herzl’s post after the death of the founder. This was a historic moment, one of those moments when history holds its breath. A totally new vista opened up: an alliance between Arabs and Jews! a joint liberation movement!

Nordau, a famous German-Jewish intellectual, did not dream of accepting this offer. He must have considered it crazy. The Turks were the masters of the country. They could give Palestine to the Jews. They could be bribed. The Arabs were powerless. They could give us nothing.

So the moment passed. Nordau mentioned the idea to the Zionist Congress in Hamburg, but nobody took any notice.

Few people know about this episode. It is described in the authoritative book by the late Aharon (“Aharonchik”) Cohen.

The possibility existed only in theory. History is made by real people, whose consciousness is formed by the realities of their time. For Europeans of the early 20th century, the idea of such an alliance with the natives against an imperial power was close to lunatic.

In retrospect, this idea could have changed history. We would have been born into a different world.

In the autumn of 1947, when I was just 24 years old, I published a booklet called (in Hebrew) “War or Peace in the Semitic Region”. It was an almost exact repetition of the ideas in the Nordau incident – which I knew nothing about at the time.

It opened with the words: “When our fathers, the Zionists, decided to set up a ‘safe haven’ in this country, they had the choice between two paths:

“They could appear in West Asia as a European conqueror, who sees himself as the bridgehead of the ‘white’ race, a master of the ‘natives’, like the Spanish conquistadores and the Anglo-Saxon colonists in America. This is what the Crusaders at their time did in this country.

“The other path was to see themselves as an Asiatic people returning to its homeland – who sees himself as an heir of the political and cultural tradition of the Semitic race, and is ready to lead the people of the Semitic Region in the war of liberation against European exploitation.”

With the exception of the terminology, which belonged to its time, I subscribe to every word even today, almost 70 years later.

The Israeli-Palestinian conflict began when the first Jewish colonist came to this country in 1882, even before the official founding of the Zionist movement. It began as a clash between two great national movements, which were totally ignorant of each other. This ignorance persists, in large part, to this very day.

The past cannot be changed. But perhaps, perhaps, we can learn from it and draw some conclusions.