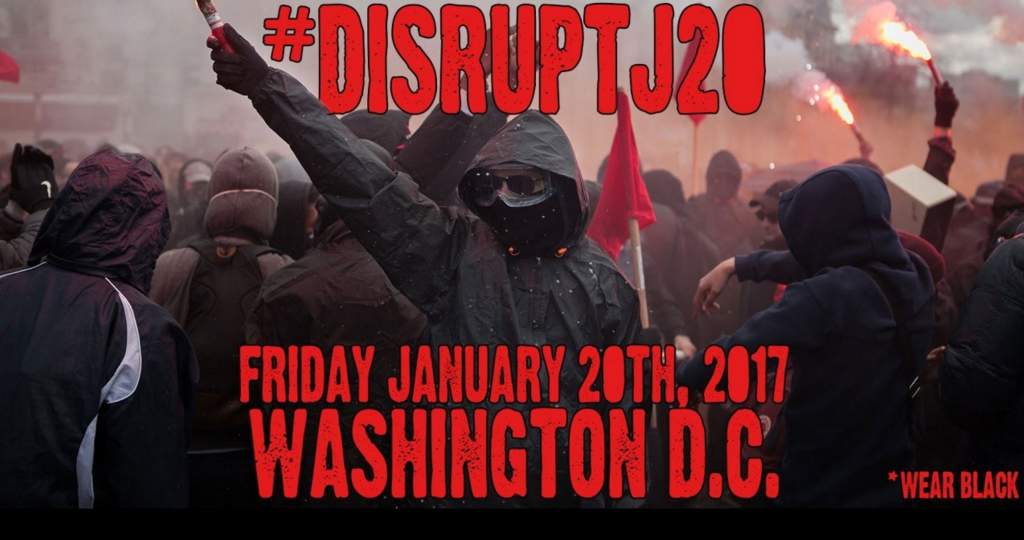 [Editor’s note:  Trump ordered, directly, as quoted by Steve Bannon’s memo read out at all GOP “grass roots” groups prior to the inauguration:

“I want to see arrests out there.  I don’t care if you have to throw rocks, break windows or spit on the police, even set them on fire, make sure there are arrests.”

The DC police sifted through those arrested, releasing members of the Young Republicans who steered the violence and were responsible for staging the most outrageous videos.

After the huge failure of the inauguration, with little attendance and empty tables at the galas, seats that sold for $5k under Obama were free if anyone would come.  Hotels were well under normal occupancy and discounting rooms that normally were 4x the price.

In order to pull of the planned riot and staged arrests, Trump made sure he took control of all security in Washington, so his people would be let go and their videographers would be allowed free rein to stage incidents for YouTube and for the BlueLivesMatter Mossad psyop.

The head of the District Of Columbia’s National Guard, Maj. Gen. Errol R. Schwartz, has been ordered to tender his resignation effective 12:01 PM on Inauguration Day. Because D.C. is not a state the president is responsible for naming the officer who heads the district’s national guard unit. Talking Points Memo reports “Donald Trump has demanded” Schwartz step down at that time.

What is extraordinarily odd is Maj. Schwartz, whose official title is Commanding General of the Militia of the District of Columbia National Guard, Washington, District of Columbia, and has been in that post since June of 2008, will literally be in the middle of protecting some of the tens or hundreds of thousands of people expected on the streets of Washington, D.C. During the inauguration and subsequent parade, when he will have to step down and turn his command over to someone appointed by Donald Trump.

Then the Trump/Bannon groups tried to set off riots at the Women’s March as well but security there was highly organized and their people were held down physically when caught trying to assault police.

At one of the “after event” GOP meetings, our people there recorded it, and heard how Trump chastised them for not making sure there was violence and plenty of arrests.

All of this is proven and confirmed.  We are dealing with a classic Nazi police state and need to be prepared.  As more is taken away, and everything will be taken away, and people don’t like it, those gun seizures warned about will become a reality.

It was always republicans who take away guns, democrats make you buy ugly guns with no flash suppressors or hand grips but don’t take them away.  Everything we warned about is right, VT warned you and too few listened, now the bill has come due and the monsters have taken over. g]

__________
Press TV
More than 200 protesters arrested during the inauguration of US President Donald Trump have been indicted on felony rioting charges.

A federal grand jury in Washington, DC, indicted a total of 214 people Tuesday in connection with the January 20 demonstration which drew thousands of protesters to downtown Washington as Trump was being sworn in.

The prosecutors alleged that those indicted used “black bloc” tactics, causing violence and attempting to disguise their identities by covering their faces.

According to the indictment, some protesters were armed with hammers, crowbars, bricks, rocks, flares, firecrackers and other explosive devices.

They have been accused of attacking a limousine driver, smashing windows of local businesses, damaging a government vehicle and committing other violent acts.

If convicted, the protesters could face a maximum jail sentence of up to 10 years, and a fine of up to $25,000.

Six police officers were hurt during clashes with Inauguration Day protesters who reportedly hurled rocks and firecrackers at them.

A total of 231 people were arrested during protest rallies in downtown Washington.

Since his inauguration, Trump has faced nearly non-stop protests and rallies condemning his divisive rhetoric and controversial immigration policy.