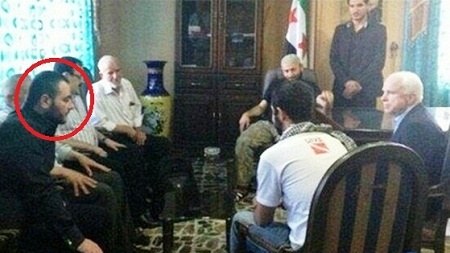 Senator John McCain (R-Arizona) made a secret trip to a Kurdish-held region in northern Syria last weekend to speak with US military officials, rebel fighters, and leaders in the region.

On Wednesday, Julie Tarallo, a spokeswoman for McCain, confirmed that he’d made the trip, calling it a “valuable opportunity to assess dynamic conditions on the ground in Syria and Iraq.”

Tarallo also praised President Donald Trump’s late January order to conduct a a 30-day review of US strategy to combat Islamic State (IS, formerly ISIS/ISIL), saying that “Senator McCain looks forward to working with the administration and military leaders to optimize our approach for accomplishing ISIL’s lasting defeat.”

The unusual trip, which the Wall Street Journal said was organized with help of the US military, was the first time a US lawmaker has traveled to the region since American special operations forces began fighting alongside local forces.

McCain, who chairs the Senate Armed Services Committee, made a short trip to the Syrian city of Raqqa to speak with Kurdish fighters and US troops about forcing IS out of the region.

Mattis also recently made a trip to Iraq to refine the plan ordered by Trump and General Joseph L. Votel, the head of US Central Command, made a trip to Raqqa to aid the review. Votel told the Wall Street Journal that more American troops would be needed to take the city from IS.

The current plan, which was formed by the Obama administration, is to take Raqqa from IS. However, Turkish President Recep Tayyip Erdogan has objected to US troops working with Kurdish troops to capture the city.

At the moment, the Raqqa plan has been suspended, but it may be reinstated once the 30-day review is completed, which would not bode well for US-Turkey relations.

During his trip, McCain met with Erdogan in Turkey’s capital to discuss the situation in Syria and current US-Turkey relations.

“The change of administration in the United States presents an important opportunity to review and reassess current policy in Syria,” McCain said in a statement released Monday.

In his statement, McCain says that he has discussed proposals to combat Islamic State with Erdogan, including establishing safe zones in Syria and strategies for driving IS out of Raqqa.

During his trip, McCain also met with Saudi Arabian King Salman bin Abdulaziz and the Crown Prince of Abu Dhabi, Sheikh Mohammed bin Zayed Al Nahyan, to discuss international relations, just days before a new round of United Nations-brokered talks in Geneva is set to kick off, which are aimed at ending the fighting in Syria, according to the National.

Senator Rand Paul (R-Kentucky) recently said that McCain has been against Trump because of a “personal dispute,” and said that if McCain was president, “I think we’d be in perpetual war.”