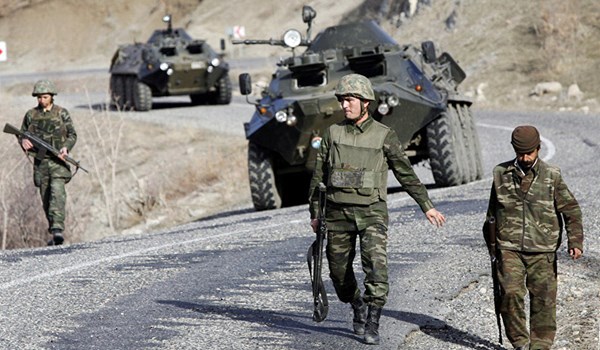 TEHRAN (FNA)– Syrian National Reconciliation Minister Ali Heidar strongly criticized Turkish army’s invasion of his country’s territory and underlined that the top political and military brass in Damascus are to make a decision about confronting the Turkish aggression.

Ali Heidar blasted Turkey for their interference and invasion of parts of Northern Syria, saying Ankara is trying to impose its presence in the Syrian crisis. He further added that the Syrian government’s stance against the Turkish Army’s presence in the Northern part of the country has not changed and Damascus considers the move as an aggression and violation of its sovereignty rights.

“Specifying the place, time and mechanism for direct confrontation (with Turkish occupiers) is the responsibility of the country’s top political-military brass. It might be better to deal with this issue first through diplomatic channels in order to evade direct confrontation,” the Syrian minister said regarding the possibility of direct military confrontation between Damascus and Ankara.

Earlier this month, the Syrian Foreign Ministry called on the United Nations and UN Security Council (UNSC) to force Turkey to end its military invasion of the Northern part of the country and attacks on its civilians. The Syrian ministry in a letter to UN Secretary General Antonio Guterres and the UNSC criticized repeated violation of Syria’s sovereignty.

Damascus underlined that Turkey’s invasion and attacks on civilians in the Northern part of the country are in line with open enmity of Ankara against Syria in the last five years, pointing out Turkey’s military, financial and logistic supports for terrorist groups in Syria.

The ministry went on to say that the Syrian government calls another time on the UNSC to shoulder it responsibility to maintain international peace and security and force Ankara to halt its attacks against Syria’s nation.

Syrian Minister of Reconciliation, Ali Haidar, said Damascus would prefer being addressed politically Turkish military intervention in northern Syria in the first phase file, but did not rule out a military confrontation to occur.

Haider confirmed in an interview with “Sputnik” that “the Syrian state and the policy has not changed its attitude toward the presence of Turkish forces has not changed and is an attack on Syrian sovereignty an occupation, and the door is open for a direct confrontation between us and the Turks.”

He continued, “but in detail to choose the time and place and mechanism of this confrontation is up to the political and military leadership, it may be advisable to handle in the first stage politically, and that does not turn into a direct military clash.”

He also spoke of “the Russian side’s ability to deny access to military confrontation and the decline of the Turkish leadership about the possibility of entering into the Syrian territory and stay there for a long and open, so it is unlikely the evolution of the confrontation in no time.”

He concluded his remarks, saying “there is no contraband Therefore, the only forbidden is that Turkey is trying to impose its presence in Syria in an open manner, and shall be deemed to be able to restore history to experience the Sanjak of Alexandretta.”

He denied that Russia be a mediator in the case, saying that “Russia is an ally of Syria and is trying to help them in all files and file of the Kurdish within those files that need to be addressed, the role of Russia facilitator.”

He stressed that “the nature of the relationship with the Kurds are internal and should be discussed internally, the Kurds are not a component externally, and are not separate from the state of the Syrian people.”

He pointed out that Damascus welcomes the fact that the militants continue or wishing to regularize their status with the Russian side, it is better than to communicate with “countries our enemies.”

He added that “the Russian side made a lot of humanitarian and food aid that was absolutely inhumane in the first stage, but now we are trying to employ them in the process of reconciliation and targeted geographically and demographically places for people subject to reconciliation projects to promote reconciliation steps in the areas.”

He stressed that “Russia’s role, of course, was able to attract some of the insurgent leaders to the political process that began in Astana, and this is a test of sincerity of the intentions of the armed groups that it is willing to replace the weapon in the political process and the replacement shot by word, and this test will show results after a period of time the Russian side an important role In which”.
He explained that the reconciliation efforts have achieved good results in the neighborhood of Barza in Damascus, while facing difficulties in Qaboun neighborhood because of the presence of armed groups bear the stamp of victory Front sabotaging reconciliation efforts.
He said Syrian Minister of reconciliation that the cessation of hostilities agreement, which was agreed upon in a social Astana 1 and 2 is a test of the intentions of the armed groups that have declared their desire to disengage from terrorist organizations is to engage in political negotiations.
Haider felt that Saudi Arabia is seeking to attract new US administration for a military ground action in Syria.
He said that Saudi Arabia Haider’s statements that its forces are ready to enter Syria and fight al “Daesh” is an attempt to attract the American decision in this regard after the elections.
He stressed that “the issue in Syria is not linked to the establishment of no-fly zone or not, because they are outside possibilities Trump, these issues do not reflect the nature of American policy in the region.”