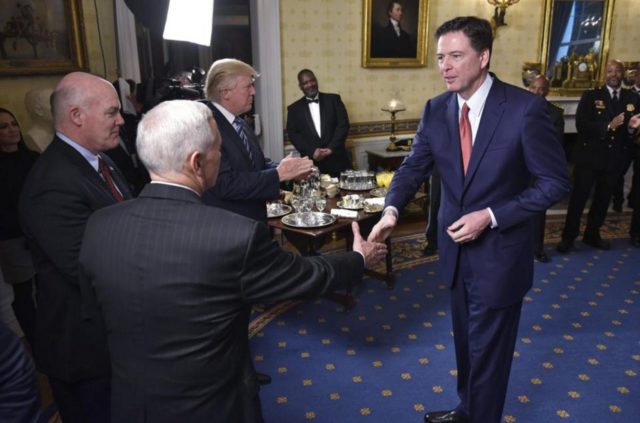 In a series of explosively bizarre abuses, Trump has “gone to the mattresses” not only against the press, but against all “opposition,” and we mean “real or imagined” with “imagine” and “delusional manifestations” belonging in the narrative as well.

Moreover, word from Moscow is that Russia has permanently gone up one to two levels in their version of DEFCON, based on their own analysis that Trump is a high risk for a nuclear attack “tantrum” based on what they gauge is his deteriorating mental condition.

Trump has secretly ordered the FBI to work up dossiers on critics in the media, protesters and activists and those he deems “elites” or “scientific dogmatists.”

The most recent move, a secret White House memo asking GOP attorney’s general across the US to introduce legislation outlawing all criticism of Trump, including any public gatherings or online/social media activity, has generated a flurry of last minute half-baked and highly illegal legislation.  Thus far 17 states have complied and, word is, that there is little hope of any of the Trump “martial law” bills will pass court challenges until or unless Supreme Court nominee, Neil Gorsuch is placed on the court, breaking the current 4/4 deadlock.

Gorsuch’s reputation is generally one where he favors special interest and power of police over the individual.  Gorsuch would have made a great judge back in the Austro-Hungarian Empire.

What is more serious, however, is the sweeping nature of the moves against nearly all first amendment rights, to the extent of physically banning national media from White House briefings, as was done today.  However it all began in secret a few days ago,

When White House Chief of Staff Reince Priebus met with FBI Director Comey and Deputy Director Andrew McCAbe to enforce a Trump “verbal directive” to criminalize unfavorable media stories, he also asked the FBI to put together a working group to report to Attorney General Sessions on ending public demonstrations as well.  The FBI was flabbergasted as Comey is under personal “blacklist” around DC for his manipulation of the election.  The worst Trump gets, the bigger hole Comey finds himself in.  Comey and, in truth, the entire FBI, has become a pariah.

Priebus had previously met with Comey and passed on President Trumps secret executive order to the FBI, an order demanding veterans who took part in the Standing Rock protests in North Dakota be investigated and put on the “no fly list” and the secret high profile terror watch lists that are sent out to NATO and Israel.

While the FBI has officially refused the White House request and even denied having made them, we can’t say the same about police organization around the country.  In as many as 20 states and hundreds of cities, police officials approached through the Department of Homeland Securities counter-terrorism liaison group have asked for procedures to be in place reminiscent of “red squad” and “COINTELPRO” activities of the last century.  (see below)

During the Bush Administration, the DHS and police intelligence organizations traveled to Israel for training in management of “hostile populations.”  The Jade Helm military exercise was an offshoot of this capability making use of military personnel in support of a potential suspension of habeas corpus, the legal term for “martial law.”

States, including Michigan, Ohio, Florida, New York, Texas, Indiana, Georgia, Louisiana, North Carolina and Wisconsin agreed to begin compiling lists of potential political threats and to develop contingencies which, in a very odd way, parallel the FEMA camp scenario laid out by conspiracy theorists Alex Jones and Jesse Ventura, now politically on the others side, begging for martial law and SWAT team roundups.

In fact the Trump organization is now enacting the very same contingencies that were warned of under President Obama but this time with full support of alt-right organizations like InfoWars and Breitbart.

The Trump White House is, in actuality, moving forward a plan to open very real FEMA camps, exactly like the wing nut podcasters have been warning about.

In the United States, Red Squads were police intelligence units that specialized in infiltrating, conducting counter-measures and gathering intelligence on political and social groups during the 20th century. Dating as far back as the Haymarket Riot in 1886, Red Squads became common in larger cities such as Chicago, New York, and Los Angeles during the First Red Scare of the 1920s. They were set up as specialized units of city police departments, as a weapon against labor unions, communists, anarchists, and other dissidents.

In New York, former City Police Commissioner Patrick Murphy traced their origin there to an “Italian Squad” formed in 1904 to monitor a group of Italian immigrants under suspicion.[1] However, it is their association with fighting communism which provides the basis for the name “Red Squad.” They became more commonplace in the 1930s, often conceived of as a countermeasure to Communist organizers who were charged with executing a policy of dual unionism – namely, building a revolutionary movement in parallel with membership in above-ground labor organizations. Similar units were established in Canada in this period, although only the Toronto police under Chief Dennis Draper used the name.

In the late 1960s, as the protests against Vietnam and the general domestic upheaval intensified, the Red Squads augmented their focus, to include dissidents largely outside the labor movement, including therein not just war resisters, but protest movements of all political stripes, including Neo-Nazis, Native American movements, the women’s movement, environmentalists, the civil rights movement, and others. The methods employed ranged from simple surveillance to isolated incidents of assassination.[citation needed] Anti-activist police operations were expanded under the Johnson and Nixon administrations, particularly in concert with, and within the cadre of the FBI‘s COINTELPRO surveillance program, but also including domestic spying by the CIA.[citation needed]

After the civil unrest during Johnson’s administration, Watergate during Nixon’s administration, and the public exposure of COINTELPRO by a dissident organization in 1971, widespread criticism of the Red Squads for illegal and undemocratic tactics emerged. In 1975, in the wake of both the Watergate scandal and the exposure of COINTELPRO, the Church Committee was formed to investigate overstepping on the part of federal law enforcement and intelligence gathering agencies. Following the recommendations of that committee, the U.S. Congress passed Foreign Intelligence Surveillance Act (FISA) in 1978, placing limits on the power of police and Federal agencies. This ended the official use of Red Squads.

Since 1978, the term Red Squad has resurfaced repeatedly to describe any action by police or Federal agencies that is deemed to be oppressive to a social or political group.

The term Red Squad has been used to describe New York City Police Department infiltration of liberal groups, first in preparation for the 2004 Republican National Convention and then continuing until today.[2][3]

It has been alleged that Red Squad style social control activity has reemerged as what is described as “gang stalking.” A former high ranking FBI agent, Ted Gunderson, submitted an affidavit[4] on the issue to a Freedom of Information Act request. The case, No. 10-00169,[5] is pending. Additionally, a private investigator, David Lawson, wrote a book about his investigation into these groups.[6] There are also several victim’s websites and news stories [7][8] making similar accusations. All sources believe these groups are citizen based, but some claim[who?] they are sanctioned by elements within the U.S. Government.