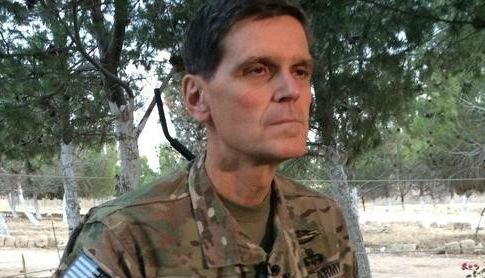 First it was Senator John McCain, his first illegal trip to Syria since he met with ISIS leader Baghdadi in 2014.  Then General Joseph L. Votel arrives and has meetings as well.  Both met with the Turks and discussed strategy and laid out a deal to keep the Kurds in their place and Turkey in NATO.

Russia is asking everyone they know about these meetings, Putin is more than concerned and with good reason.  This is confirmed and not minor at all.

Only a day before, there are reliable reports that the US was evacuating ISIS personnel, some rumored to be Israelis, from Mosul through Tal Afar.  Then Iraq’s Air Force bombed inside Syria, we are told with full permissions and cooperation from Syria, an attack intended, we are told, to break up the US operation to save ISIS from being cut off in Mosul.

Then 24 hours later, Turkey announced a magical breakthrough and ISIS had withdrawn, seemingly directly through Turkish lines.  We knew the truth, I debriefed the source via phone “real time” while ISIS was getting on the trucks.

Then today, suicide bombers hit Homs city, wiping out Syria’s security command there while, simultaneously, gas lines that power Damascus were blown. Thus, both major cities in Syria are powerless and out of action.  Turkey actually dried up the Euphrates River to cause chaos in Syria rear and cause them to retask in a humanitarian effort to save Aleppo.

Over the past two days, during Army Gen. Joseph L. Votel’s latest trip to the Middle East, the U.S. Central Command chief met in Iraq and Syria with coalition members, other partners, senior commanders and military leaders to discuss operations and continued collaboration there.

Votel’s first stop was in Kuwait on Wednesday to meet with Kuwaiti Defense Minister Khaled Al Jarrah Al Sabah and other military leaders before traveling to Baghdad Thursday.

There, Votel met with the U.S. embassy country team and senior commanders on Friday, and later visited Iraq’s Defense Ministry to meet with the Iraqi army’s chief of defense and staff, “and talk about … upcoming operations.”

Votel told reporters traveling with him that he and the Iraqis also discussed “a few things that they are looking for assistance on and that we are … working with them on as they continue to maintain momentum” in the fight against the Islamic State of Iraq and the Levant.

During a stop in Taji, about 27 miles north of Baghdad, the general said the rural district is one of six locations in Iraq where coalition trainers are building partner capacity — a critical need for the coalition, he noted.

“Taji [is] the main sector where we bring organizations … to get them ready to do operations the Iraqis need to do to get control of their country from [ISIL],” Votel said.

“Our strategy … is focused on building partner capacity and executing our operations on a by, with and through manner, so this aspect … is an extraordinarily important part of what we’re doing,” he said.

___________
TEHRAN (FNA)- Media sources said that Turkey has cut off the Euphrates River flow to Northern Syria, forcing the Tishrin dam and its hydropower plant in Eastern Aleppo to stop operation .

Jahineh news reported that Turkey has closed off the flow of water in the Euphrates River that runs from its Southern territories to Northern Syria.

The Euphrates River is the main source of water reservoir behind the Tishrin Dam, and The news website said the shortage of water in the Dam has stopped its Hydropower plant’s power generation for Aleppo city.

Jahineh added that water in Assad Lake and behind the Tishrin Dam is at its lowest level and insufficient for pumping into the turbines of the Tishrin hydropower plant.

“So electricity has been cut off in the towns of Manbij and Ein al-Arab,” it added.

On Thursday, Syrian National Reconciliation Minister Ali Heidar strongly criticized Turkish army’s invasion of his country’s territory and underlined that the top political and military brass in Damascus were to make a decision about confronting the Turkish aggression.

Ali Heidar blasted Turkey for their interference and invasion of parts of Northern Syria, saying Ankara was trying to impose its presence in the Syrian crisis.

He further added that the Syrian government’s stance against the Turkish Army’s presence in the Northern part of the country was not changed and Damascus considered the move as an aggression and violation of its sovereignty rights.

“Specifying the place, time and mechanism for direct confrontation (with Turkish occupiers) is the responsibility of the country’s top political-military brass. It might be better to deal with this issue first through diplomatic channels in order to evade direct confrontation,” the Syrian minister said regarding the possibility of direct military confrontation between Damascus and Ankara.