We have argued over the past few months that John McCain is still around dancing like a parrot because he has been paid to say weird things, crazy things, and dumb things in the media. He has accepted a large sum of money from terrorist states like Saudi Arabia, and the Guardian even reported back in 2008 that McCain’s funding came from a very interesting source: the Rothschilds. The report states:

“At issue is a fundraising luncheon held in March at London’s Spencer House, during McCain’s swing through the United Kingdom. An invitation to the event lists Lord Rothschild and Nathaniel Rothschild as hosts, and indicates the event was made possible with their ‘kind permission.’”[1]

But what’s wrong with taking money from the Rothschilds? Well, plenty. Keep in mind that one of the “industrial forces” that controlled the financial world in the eighteenth and nineteenth centuries through covert operations was none other than the Rothschild family. The Independent itself reported in 2008 that the Rothschilds have dominated the political landscape through covert means for at least 200 years:

“The Rothschild family and politics have been intertwined for generations, ever since Nathan Rothschild, who founded the English branch of the family business, financed Britain’s war against Napoleon two centuries ago…

“When another member of the clan, Sir Evelyn de Rothschild, married the New York businesswoman Lynn Forester, they spent the night of their wedding dinner in the White House as guests of Bill Clinton. Lady Rothschild was a fund-raiser for the Democrats, but defected to the McCain camp after her friend Hillary Clinton was beaten to the nomination by Barack Obama.”

S.C. Mooney writes that “the Rothschild family stands out in history as the prime example of manipulating the power of international banking… By means of usury on international scale, they were able to consolidate great wealth and power to turn world affairs according to their own fancy.”[3] The Rothschilds financed wars in England and America, collecting huge interest rates and making a massive profit. 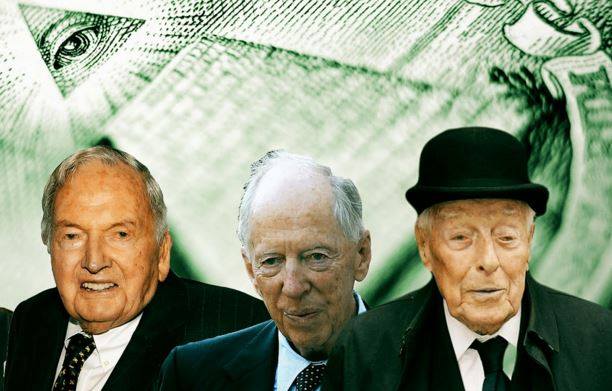 The Rothschilds, in relation with the Rockefeller Foundation, were behind the “fiat money and inflationist policy of the early New Deal.”[12] (In 2012, the Rothschilds again attempted to merge British and French banking operations in order to gain more control. David de Rothschild declared that the new system would “better meet the requirements of globalization in general and in our competitive environment in particular, while ensuring my family’s control over the long term.”[13])

“clandestinity was and remained a feature of Rothschild political activity…Yet all the while they were helping to shape the major events of the day: by granting or withholding funds; by providing statesmen with an unofficial diplomatic service; by influencing appointments to high office; and by an almost daily intercourse with the great decision makers.”[22]

Heine saw this as dangerous to the Jews. Marx saw it too. But the only people who are still wondering whether there is any problem at all are puppets like John McCain, who can never get tired of slaughtering and torturing men, women and children in the Middle East for the Rothschilds and Israel. No wonder John McCain cannot make sense whatsoever.

[5] Esther Benbassa, The Jews of France: A History from Antiquity to the Present (Princeton: Princeton University Press, 1999), 104.