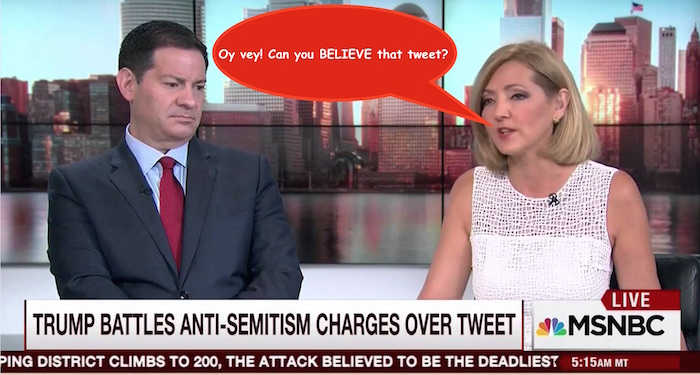 Accusations of anti-Semitism have dogged Donald Trump since the 1970s, when he was known to  show up at meetings with Jewish business partners wearing an “Auschwitz was a gas” T-shirt.

Trump’s main advisor Steve Bannon vociferously denies the rumors: “Don’t worry, we won’t start killing all the Jews until we’ve finished with the Muslims, and that’s going to take awhile.” But despite the denial (as it were) some American Jewish leaders are worried.

Now Jewish concerns are spiking due to Trump’s recent allegations that Jews have been desecrating their own cemeteries to gain sympathy and demonize their enemies.

Trump, true to his nature, has refused to back down. Instead, he has opted to throw gasoline on the fire with his latest tweets:

Interviewed from his retirement home, Abe Foxman waxed apoplectic, saying “Trump should be ashamed of himself for suggesting that Jews are capable of orchestrating false flag attacks. Such a thing has virtually never, ever happened….aside from one or two exceptional cases like the Lavon Affair, the USS Liberty incident, the Entebbe hijacking, the Achille Lauro hijacking, the Munich Olympics massacre, 9/11, Madrid, Bali, 7/7, Mumbai, the Boston Marathon bombing, Charlie Hebdo, Copenhagen, the 2015 Paris attacks, the Brussels Airport shooting, Nice, Munich, San Bernadino, Orlando, and a few hundred “terror attacks” inside Israel over the years, as well as 98% of the cases in which somebody has vandalized a Jewish community center or cemetery or spray painted a swastika on a synagogue, as well as an undetermined number of other cases, such a thing has never, ever happened, except maybe in Donald Trump’s anti-Semitic imagination.”

From his Black Sea resort known informally as Mar-a-Lagovitch, Russian President Vladimir Putin issued a statement urging everyone to calm down: “Cool it! We aren’t planning to release our video footage of Trump with those girls in Hitler mustaches and SS regalia any time soon.”