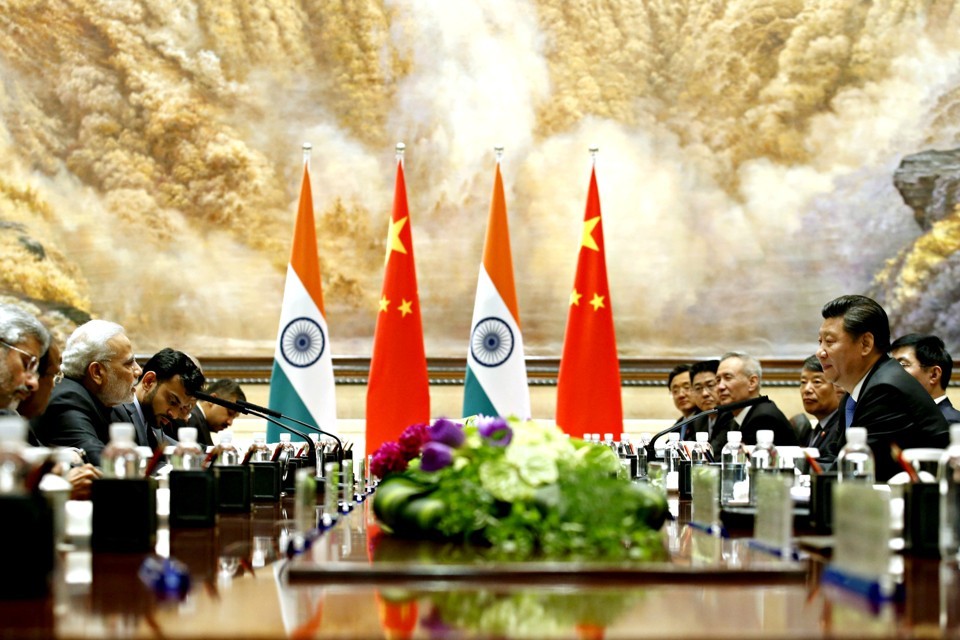 [ Editor’s Note: This was an older NEO China piece that got lost in all the Trump hoopla, but is still a timely piece so I wanted to get it up. One of the major benefits of our partnership with NEO is that we were weak in Eurasia, so they were a perfect fit for us.

From a long-term Intel perspective, we knew that an economically successful China would eventually be tagged as a “threat”; and the US dogs of war would eventually be sent to do some 21st century gun-boat diplomacy. Obama announced his Asia Pivot in the middle of the Iran nuclear talks, but I have to admit I did not see the Ukraine coup coming.

Part of that was based on the EU having an $100-billion trade surplus with Russia, and its having been a rock solid dependable energy supplier. They had a win-win situation going. So I hope I live to see Merkel’s book come out explaining her reasoning for what I saw as a brain-dead stupid move given the other uncertainties that were on the table, the struggling EU and America’s regime-change wars.

Trump was not on the scene then, and he provides lesson to us all about wildcards coming in from stage left. We know now not to take Mr. Motor Mouth at face value over anything he says, as he seems to live in the moment, not the future. His bankruptcies are solid proof of that, where he just walks away from business carnage — and that is what has me worried most about him, his doing that to us… Jim W. Dean ]

While the new US president, Donald Trump, might have thought deeply about making “America great again”, the policies (read: “America First”) he has outlined to achieve this objective are likely to cause other consequences, most important of which is America’s further decline in the global arena and subsequent rise of China to what the latter’s leadership has implicitly called ‘playing the world leader.’

To this end, China is expected to receive significant support from both its rivals and allies. In Asia, for example, Trump’s nationalist rhetoric has received a response that points to a larger regional (read: “regionalization”) configuration taking place wherein China, followed by Russia, is playing an anchor role.

As a matter of fact, China’s militaristic response i.e., deployment of intercontinental missile systems, to Trump’s aggressive nationalist assertion and the heat it is creating with regard to the South China Sea has found a powerful friend in Russia, and together both of these countries are likely to challenge Trump-ism in its various i.e., military and non-military forms.

This is evident from the way Russia has not objected to or reacted against the deployment of missile systems near its border. On the contrary, Dmitry Peskov, spokesman for President Vladimir Putin, said in televised remarks on January 24,

“If this information is true, any military development in China is not perceived by us as a threat to our country,”

Similarly, in line with the Kremlin’s view, this deployment was seen by the Russian media as a response to US missile defenses in the Asia-Pacific and that China was sending a message to Washington, and not to Moscow.

“The missile’s dead zone is no less than three thousand kilometers so … Russia’s entire Far East and Western Siberia are not within the missile’s reach,” Konstantin Sivkov, president of the Academy of Geopolitical Problems, Doctor of Military Science, was quoted as saying by the TASS news agency.

Clearly, China is perturbed by the Trump administration’s aggressive postures and is equally wiling to re-write its own rules of engagement, an important one of which is getting politically involved in regions and areas which until recently fell outside of the parameters of China’s “non-interference” principle (read: Chinese President Xi Jinping’s offer to mediate in the political solution of the Ukraine crisis).

While some see in this offer a warning to Moscow that any attempt at improving relations with the US at China’s expense will face the prospect of Beijing reaching out to Russia’s foes, this is hardly the case.

Its primary reason is the military and economic regional blocks both China and Russia are seeking to build in the region and the policy of integrating other countries, including those which are currently allied with the US, in these blocks.

Therefore, far from a ‘warning’ to Russia, it is a message to the US that China is likely to speedily fill the space Trump’s nationalism and protectionism is likely to create in the world, especially in Asia.

Donald Trump’s decision to withdraw from TPP has already created a big vacuum—and the only country economically capable of providing a suitable alternative to this deal is China. Through both the Free Trade Area of the Asia-Pacific and the Regional Comprehensive Economic Partnership, two proposed multilateral commercial deals that Beijing has so far championed as alternatives to the TPP, China is gearing up to further diminish the US role and position in the region—a region that has been previously called the epicentre of “Asian Century.”

Thus, the US` withdrawal from the TPP and its likely trade disputes with China and other countries in the region, which is an inevitable outcome of ‘America First’, means that the US is unlikely to take the leading role in shaping the economic integration of the region, thus leaving for China and its regional allies ample space to cover.

This would, in turn, boost Beijing`s strategic influence. As it stands, as one analyst has aptly stated, in today`s Asia, economics, strategic influence and security relationships are inseparable. If the economic future of regional countries rests more and more with China, it will help increase China`s strategic clout in the region too.

On the contrary, while the US is least expected to abandon the region, Trump’s emphasis on re-negotiations of both military and economic ties with countries on individual basis is likely to cause more difficulties than ease its way.

Regional countries are not powerful enough to counter China on individual basis even if they have US support. TPP, for them, was the platform that they could use to counter-balance China’s expanding influence. The demise of TPP is, therefore, the opening up of a window for China to re-define regional dynamics as well as its role in the world.

“If anyone were to say China is playing a leadership role in the world I would say it’s not China rushing to the front but rather the front runners have stepped back leaving the place to China,” said Zhang Jun, director general of the Chinese Foreign Ministry’s international economics department.

And China is accordingly gearing up to showcase its new role in the up-coming summit on its “One belt One Road” project in May, 2017. It is being seen as one opportunity for Beijing to project its leadership of global infrastructure and investment.

A diplomatic source familiar with preparations of the summit said China was likely to hold it at the same glitzy convention centre used to host the Asia Pacific Economic Cooperation summit in 2014, setting the stage for Xi’s most high-profile diplomatic event of the year. “China’s pretty much inviting everyone,” the diplomat said, according to Reuters.

The demise of TPP, which is pretty much a clear manifestation of Trump’s protectionist “America First” policy, is, what John Kerry had called, a “giant step backwards” for the US’ erstwhile leadership in the world.

In the Obama administration’s plans, the TPP was to be a system building platform. Hence, having an evident geopolitical significance, it cannot be replaced by single bilateral trade agreements.

In this sense, the signing of a simple commercial deal with Washington would have a diminishing impact on the US’ regional allies. Unless it is matched by an Asia-Pacific-wide strategic initiative involving the US, which is unlikely to happen at this stage, China will face no major obstacle in its way of economic and military expansion in the region.

And as China Daily pointed in a cartoon, showing Trump digging a grave for TPP, ‘the US withdrawal from the TPP means it is unlikely to take the leading role in shaping the economic integration of the region, thus giving China more scope to do so.’

Trump’s protectionism is, therefore, setting the context for China’s ultimate rise to a leadership role — something that Russia and a number of other countries in the region might found less problematic and hegemonic than that of the role the US has been playing there for decades.