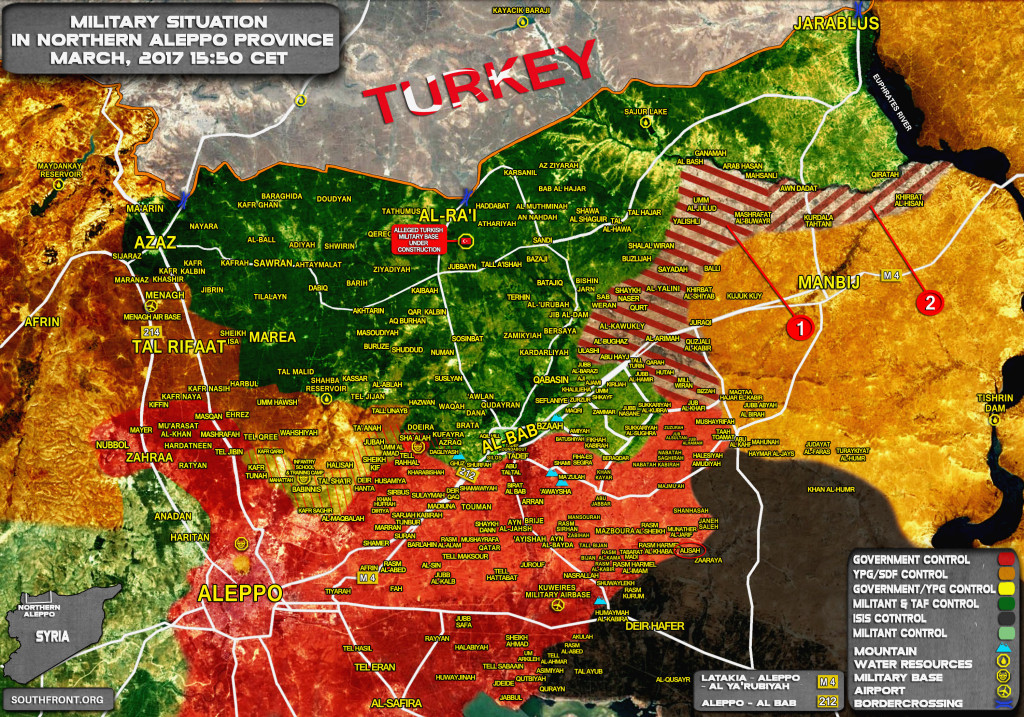 [ Editor’s Note:  We have a very crazy situation continuing here, a tightrope act that we cannot see being sustained.  Here we are in the middle of the 4th Geneva talks with the Syrian opposition, which are progressing, and we have Turkey as a member of the Russia and Iran Tripartite group, pledged to honor Syria’s territorial sovereignty.

It has moved on Al-Bab with no coordination and no diplomatic opposition from Iran or Russia, and then announces it will take Manbji, also. When Iran’s Rouhani met with Erdogan this week there were no public accusations of betrayal or ultimatums.

Then we have the U.S. General Votel signalling that more troops, special forces ones, would be necessary along with more mobile heavy weapons for the YPG forces to continue its push on Raqqa.

Today we have this story that the YPG is turning over a large buffer zone between it and the Turkish incursion forces, setting up a confrontation with Syria. But we have to ask where is Syria going to find the troops to hold this new front and supply them logistically. And of course even that will not be feasible without a pledge of Russian air cover, so we have a very dangerous situation for an expansion of the war.

Russia stated today that there are no instances of YPG attacks on Turkey, inferring that Turkey has no justifiable security need to continues its push toward Manbji. One would think that these issues would have been worked out when the Tripartite group was formed. We can see now that they were not, or someone has changed their mind, or never intended to honor their commitments.

The big question mark is how this will effect the peace talks, and could a major flare up within the Tripartite group wreck the ceasefire, if even via a ripple effect. This is a moving target story so we will be watching it closely... Jim W. Dean ]

The US-backed Syrian Democratic Forces (SDF) primarily consisting of the Kurdish People’s Protection Units (YPG) will hand over wide areas west of the northern Syrian town of Manbij controlled by the SDF/YPG, according to a statement released by the so-called Manbij Miltiary Council (MMC) – another entity created to hide the presence of Kurdish YPG fighters in the area. “Defending the civilians and protecting them from the adverse impact of the war, ensuring the security of Manbj and frustrating the invasion plans of the Turkish army against Syrian soil are the goals we we have taken for all the peoples living on the lands of Syria.

In order to realize these goals of ours, we as Manbij Military Council state that we have handed over the defense of the line – where villages between the positions of our forces in western Manbij and Turkish-affiliated gangs are located – to Syrian state forces as part of the alliance we have made with Russian officials,” the Kurdish Hawar News Agency quotes the MMC statement.

Thus, the SDF wants to use Syrian army troops as a buffer against Turkish-backed militant groups in northern Syria and refers that this decision is made after talks with “Russia” – a clear aim to use the Russian and Syrian military and diplomatic capabilities to defend itself from Turkey.

SF recalls that Talal Silo, a spokesman for the SDF, argued that the US is the only SDF partner in Syria just few months ago (August, 2016):

“It’s forbidden to negotiate with the Russians because we seek for an alliance with the United States. It’s impossible to communicate with any other party and to not lose the credibility of the international coalition. Of course, we are free, but we can not attack if there is not signal from the Americans.”

It seems the SDF/YPG dramatically changed its attitude in March 2017 after it had became clear that few US Special Forces troops were not enough to save the “US-backed opposition force” from the Turks.

We recall after taking control of al-Bab, Ankara openly announced that it’s going to clear Manbij from PKK-linked terrorists.

Turkey sees the YPG as just a branch of the Kurdistan Workers’ Party (PKK), with which Turkey has been at war almost continuously since 1984. In turn, the PKK seeks to establish an independent Kurdish state in southern Turkey.

Intense clashes already took place between Ankara-led forces and the YPG west of Manbij and both sides suffered casualties in late February and early March.

Turkey has been also deploying additional troops and military equipment in Syria and Ankara-led militant groups are preparing to storm the important YPG-held town of Tell Rifat.

There is still no official reports which areas the Syrian army will control in the Manbij countryside. However, there are two options (important – the map in the article shows approximate areas which could be transfered to the Syrian army):

In any case, one problem will remain. Ankara-led forces will still be able to attack the YPG/SDF in northwestern Syria and Tell Rifat will be an obvious target for this effort.