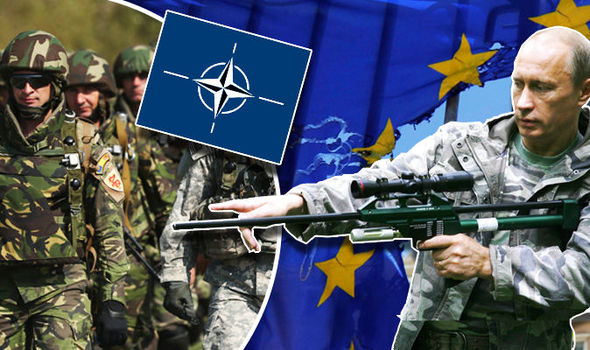 You may want to grab your munchies before you read this. NATO’s Deputy Supreme Allied Commander Europe, General Adrian Bradshaw, has openly declared that 1) Russia has meddled in the US election, and 2) this represents an “act of war.”[1]

“‘It is a political decision, but it is not out of the question that aggression, blatant aggression, in a domain other than conventional warfare might be deemed to be Article Five,’ Bradshaw told The Times. Article Five deems an attack on one member state to be “an attack on all.’ He further declared that this would go into effect, ‘when it’s declared to be.’”[2]

Bradshaw moved to say: “It is hard to imagine any future conflict that doesn’t include a substantial cyber element. It’s not just the threat of overt military attack, but it’s a raft of other measures, including covert, paramilitary, and non-military activities, some of which will be coordinated by the intelligence arms of Russia. And we as NATO need to have our antenna tuned to the signs that this sort of hostile activity is going on.”[3]

Bradshaw’s logic is pretty simple here: Any country that involves in “substantial cyber element” must face severe consequences, which may include a military coup. Russia allegedly hacked the US election, therefore Russia must pay.

Russia must accept the challenge because that would prove the end of the New World Order as we know it. Bradshaw certainly should retire from the military because obviously his memory is fading away. Back in 2012, both the United States and Israel created a computer virus called Stuxnet. Why?

NWO agents in Israel and the US wanted to hack Iran’s nuclear facilities and destroy their projects.[4] The program itself was developed and tested in Israel.[5]

“Overall,” the Washington Post said then, “the attack destroyed nearly 1,000 of Iran’s 6,000 centrifuges…”[6] NWO agents bragged about how they did a good job, but no one did say that America and Israel ought to be bombed for this violation.

Can General Adrian Bradshaw explain this perennial contradiction for us? Does he really want us all to believe that Russia is actually the aggressor while NATO has already placed thousands upon thousands of troops around Russian borders? Does he mean to tell us that NATO is not advancing its troops in major countries in Europe?

You see, people like Bradshaw cannot make sense because they have abandoned the moral and political order and have embraced an essentially diabolical ideology, which can manifest itself in several ways: covert operations, colossal hoaxes, complete fabrications, and just plain lies.

NATO obviously doesn’t like Russia because Russia has obviously changed the political and ideological climate in Syria and elsewhere. As US Deputy Secretary of Defense Bob Work put it last summer, “Our adversaries [Russia], quite frankly, are pursuing enhanced human operations and it scares the crap out of us.”[7]