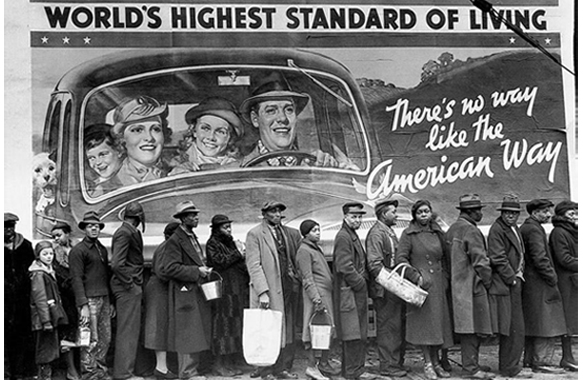 In December 2016, Ohio Governor John Kasich signed a bill allowing Ohio residents to carry guns to class in universities. Attached to this bill was a rider that prevented Ohio cities from raising the minimum wage. You see, Cleveland was ready to enact a citywide $15 dollar an hour minimum wage, placing them at about 80% of par for other industrialized nations.

Ohio’s current minimum wage is $8.10 per hour and will increase to $8.15 next year, equivalent to Albania but still a bit higher than Bangladesh.

This is the official policy of the Trump administration in Washington as well, financed and supported by massive donations to candidates from the American Enterprise Institute, the US Chamber of Commerce and the National Association of Manufacturers.

The reason conservatives want very very low wages is so that high school students can work at minimum wages at grocery stores after school, packing bags for customers, so that they can use this money to pay for college.

In 1963, this was the job I got. The wage was $1.50 per hour. OK, let’s take a look at how this works. Based on the Consumer Price Index, a figure that has been artificially jockeyed around to hide real inflation, now more heavily based on collapsed housing prices, rather than consume goods, I was making, by today’s standards, $12.50 per hour.

There were millions of these jobs available for students who, if they stayed in retail, enjoyed a standard wage of about $2.20 or higher, around $18 per hour by today’s standards.

In a perfect world, certainly one that doesn’t exist in deindustrialized America, technology and increases in productivity were to increase wages and the standard of living beyond the figure of 1963, when jet engine passenger airliners were in their infancy. In 1963, the standard transitional job with no education was into manufacturing at $3.00 per hour, the equivalent today of $24 per hour, jobs readily available with overtime pay, full insurance, paid vacations and holidays. There is little left of things like “overtime pay” or the forty-hour workweek anymore, that was chiseled away during the Reagan presidency long ago.

In real America, today in the real world, most of those who would have held the manufacturing jobs work in retail, not at $12 or $18 per hour but at $8-$10 per hour and there are fewer jobs, as the teeming millions who collected carts or stocked shelves have been replaced.

Cashiers bag groceries off turnstiles or customers bring their own bags “to save money.” Store managers now make the $12 per hour the bagger used to get and the adult head of household running the cash register is doing it for minimum wage, 40% less than the part time student of half a century ago.

The prestigious state universities had a typical per credit hour cost of $12 at that time with most students qualifying for lowered tuition, often by 75% and grants to pay living expenses as well. Today colleges charge typically $400-$600 per credit hour with few grants available and only high interest loans, that have become the shame of America, a student loan racket that bankrupts those who move from university to minimum wage job and years of debt. In truth, it is illegal now to try to mitigate even student loans through the type of bankruptcy that Donald Trump has used over and over to shed his own debts.

With American students dropping out of school with tens of thousands in debt, victims of a greatly deteriorated education system, a hopeless job market and rampant inflation, in the interim America has imported millions and millions of workers.

Here is an example, nursing pay in the US is at an all-time low with a glut of nurses who work for months or even years in minimum wage retail jobs while waiting for a slot to fill yet tens of thousands of foreign nurses are brought into the US each year. Why is that?

The end result has been a 40% drop in wages over 50 years and the ability to build new families is now almost impossible. The only good jobs anymore are in the “all volunteer” military and, curiously, America has been at war almost continually since 1963.

Growing up and working in America, if you don’t come from “money,” involves luck and too often also involves 5 or more years in Iraq or Afghanistan or whatever the “flavor of the month” war is.

Americans move from home to school and back home again and to shared apartments, dilapidated homes in crime ridden neighborhoods, while employers, all well organized and coordinated, spiral wages to nothing while their offshore parent corporations pump cash into foreign banks.

This is the real story of job loss in America, Trump who has never had a job, knows nothing about real people.

For those who do well, money comes easy and easier still comes the harsh judgement of others deemed “unworthy.” For those fortunate enough to be well placed in the rackets of the day, doctors, lawyers, bankers, insurance, pharmaceuticals or government, money flows like water.

For others, the majority of others, life goes nowhere at all.