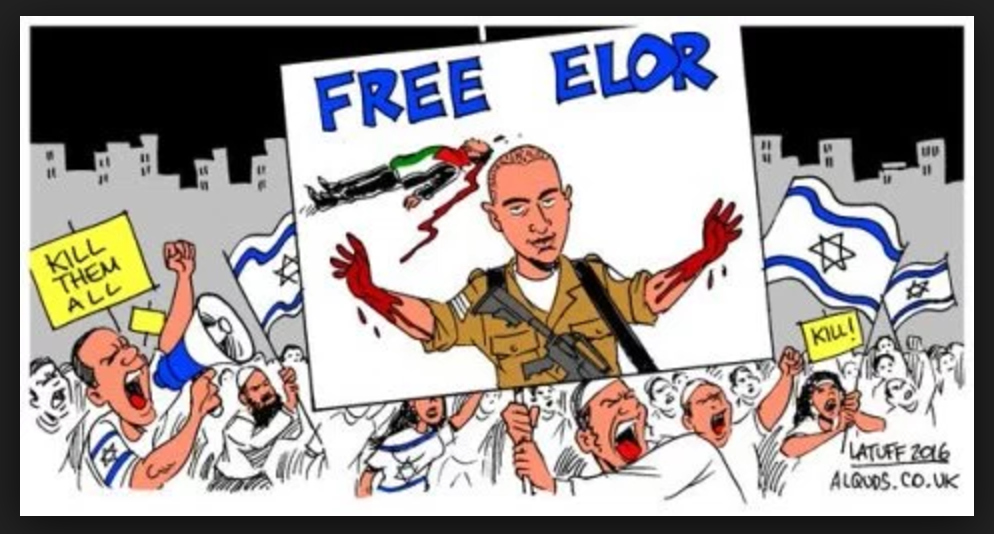 Alimuddin Usmani: IDF soldier Elor Azaria was convicted of manslaughter for shooting dead a  wounded Palestinian. The case deeply divided Israel. Many Israelis said he was just doing his duty and was scapegoated by the army. On the other hand, a military spokesperson said“This is not the IDF, these are not the values of the IDF and these are not the values of the Jewish people”. Gideon Lévy called the 18 month sentence “a sentence fit for a bicycle thief”.

What are your comments on this case?

Gilad Atzmon: A lot of issues are at stake here. Azaria was obviously a cold-blooded murderer who shot a wounded Palestinian in the head. Basically, he committed an execution in broad daylight.  From an Israeli perspective, Azaria’s main crime was being caught on camera. Yet, the circumstances in which he operated were pretty impossible. These Israeli soldiers are deployed in policing tasks. They, the occupiers, are engaged in conflict with the indigenous people of the land. It is a recipe for disaster. More often than not, Israeli soldiers and police forces end up operating as execution squads. Yet, these vile practices do not necessarily reflect any official military order. Instead, they bring to light the atmosphere within the Israeli street: the PRE-traumatic stress, the impunity to kill, the lack of any ethical sense and so on.

Putting aside Azaria’s brutal act, the court case exposed a deep conflict within Israeli society. Zionism, as we know, promised to make the Jews ‘people like other people.’ Yet, the reality on the ground suggests that Israelis have to spend a lot of time and energy concealing the fact that they actually share very little with other people, if anything at all.

Azaria was found guilty of manslaughter, which is surprising considering the clear evidence of 1st degree murder. Yet he was sentenced to just 18 months in prison.  The explanation of this discrepancy between the court’s verdict and the light sentence can be understood on more than one level.

Military courts, as opposed to civilian courts, are not committed to any notion of ethics but rather to the needs of the military system. For instance, a military court sentencing a soldier to death at daybreak is not guided by the seeking of justice but by the needs of the system. It attempts to deter other soldiers from insubordination, cowardice or defection.

Similarly, because Israel needs the IDF to sustain the occupation, Israel must make sure that its soldiers are confident that the system will always eventually stand by them even if they are  caught in an unfortunate situation such as shooting a wounded Palestinian in the head.

On the day of the verdict, veteran chief of staff Moshe Yaalon, admitted that his initial and harsh reaction to the Azaria incident was because there was an immediate need to calm the situation on the ground. He basically had to throw something at the Palestinians, hoping to prevent mass protest and possible escalation. But at the end of the day, Israel wants the Palestinians to know that any form of resistance will be met with by radical and unpredictable measures.

This leads us to the notion of Jewish values in general and the IDF’s moral values in particular. As I have said many times before, there are no Jewish universal values. Judaism and Jewish culture are tribally-oriented. Moreover, Judaism is guided by Torah and Mitzvoth (commandments). Accordingly, the Jew is expected to follow rules rather than forming ethical judgments. Haskalah, the Jewish enlightenment, was an attempt to universalize Judaism by mimicking European secular thinking. Thus, those universal values that were introduced by Haskalah are not Jewish, but simply borrowed by the Jews from their host nations.

Zionism was a promise to civilise the Jews by means of ‘homecoming.’ It implicitly accepted that Jews weren’t people like all other people, but it believed they could be. Zionism promised to make the Jews productive, to gravitate towards labour and farming. The IDF was supposed to be a humane and ethical military force.  I grew up with photos of Israeli soldiers giving their own water to Egyptian POWs in the desert (1967). It took a few years before I learned that in fact, the Sinai desert was a slaughter zone for thousands of Egyptian soldiers who were sent to their deaths in the burning sand. It took a few more years before I became aware of the Nakba horror – the brutal ethnic cleansing of the Palestinian population in 1948. Just 3 years after the liberation of Auschwitz the young Israeli army, together with Jewish paramilitary forces, massacred dozens of  Palestinian villages. I assume I don’t have to go into details of current Israeli war crimes.  To sum it up,  the IDF as never been a moral army. IDF moral values are a myth. What we have instead is a growing record of crimes against humanity.  The facade of the military trial was, in practice, an attempt to convey the image of ethical thinking. After all, ‘by way of deception’ must be a kosher procedure.

Alimuddin Usmani: The Jewish Telegraphic Agency wrote that Socialist primary winner in France, Benoit Hamon, had the backing of prominent anti-semites. Before the vote, Dieudonné and Alain Soral called for Manuel Valls to be knocked out of the race and Valls, known for his zealous support of Israel, did indeed receive a slap in the face.

What do these things reveal about the mood of French people?

Gilad Atzmon: It isn’t just France. We detect a global fatigue with Jewish politics and lobbying. We see it in Britain and in the USA – and Jews are the first to notice it. Jewish organisations have long been complaining about the rapid growth in ‘antisemitic’ incidents (whatever that means). Yet, instead of engaging in some elementary self-reflection, asking themselves what is it about them and their behaviour that brings such anger and opposition, these organisations manage to repeat the same mistakes over and over again. Instead of opening the discussion on Israel and Jewish power, they use every means at their disposal to suppress freedom of speech and to silence legitimate criticism of Jewish ID politics, global Zionism and the brutality of the Jewish state.

One would think that, after the Shoah, Jews would learn the necessary lessons and would go out of their way to conceal Jewish arrogance. But In practice, the complete opposite has happened. The Jewish lobbies, both Zionists and ‘antis,’ are more obnoxious and arrogant than ever.

Alimuddin Usmani: CRIF defines itself as the political representation and official mouthpiece of the organized Jewish community. In the FAQ on it’s website we find this question : Does CRIF have an influence on French politics?

And the answer is:

Yes, CRIF influences French politics by defending its vision of what should be the public policy against racism and anti-Semitism, offering its thoughts on the transmission of the memory of the Holocaust, or defending its idea of the peace in the Middle East.

In summary, CRIF acts exactly like any other association concerned by the public interest.

What do you think of this answer?

Gilad Atzmon: I believe that it is a valid answer as long as French people are willing to accept that one minority group that just happens to be privileged can dominate the discourse on public matters such as racism, French past and foreign affairs. But Jewish history actually teaches us that these celebrations of Jewish power always come to a tragic end.

Alimuddin Usmani: On CNN, Bernard-Henri Lévy wrote that the Trump administration has a problem with Jews.

How do you explain that BHL is so worried about Trump?

Gilad Atzmon: It is simple. BHL realises that, considering his intensive bellicosity and war-mongering, he himself is a serious Jewish problem. Zionism was all about a promised land yet global Zionism, for which BHL is a prime conduit, signals the transformation from a ‘promised land’ into a ‘promised planet.’ It is, in fact, immoral interventionists such as BHL who bring disasters on the Jews.

When BHL accuses Trump, the first American Jewish President, of antisemitsm, he may be providing us with a glimpse into his own sense of guilt. It is a last and desperate attempt to prevent the floodlight from exposing the criminal continuum between Israel and the Ziocon wars spreading around our planet.

Alimuddin Usmani: Recently you gave concerts and talks in Czech Republic. You announced that you will be back there in June. What do you like about this country?