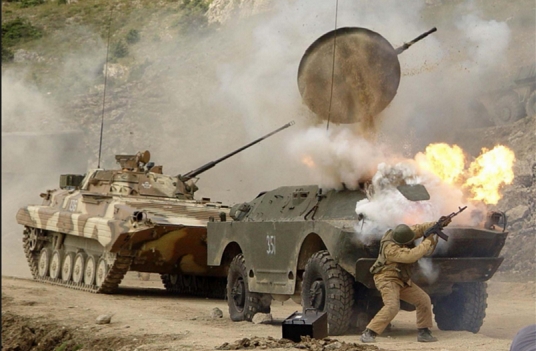 …by Masud Wadan, for VT

Russia turned the heat up on its counter efforts to tame U.S. influence in the region, especially to the north-ward of Afghanistan. The counteractions from Moscow went apace after 2014 when Russia came to the sense that U.S attempts to perpetuate and enlarge presence.

In the last two years, the ISIS’s expansion in Afghanistan which is mainly pointed to Russia was not so subtle. The rise of ISIS in parts of Afghanistan coupled with Afghan government’s apparently no all-out crackdown on burgeoning militant hotspots rest assured Russia to act unilaterally or align itself with heavyweight regional powers.

At long last, Russians discovered that Taliban and other belligerent groups in Afghanistan and Pakistan are projects endless in sight. Mostly under new Afghan government, Islamic State, in particular, started to encroach into Afghan borders with Central Asian countries.

In January, Moscow hosted a trilateral peace conference on Afghanistan with Pakistan and China and brushed aside the Afghan government. Afghan officials blasted the Moscow-led Afghan talks and described it inconclusive without involvement of Afghanistan.

To appease Afghanistan for exclusion in the first talks, Moscow called Afghanistan along with India and Iran on the top of pre-conference participants to its February peace negotiation on Afghanistan. Russia’s initiative seems to be a striking tit for tat approach for the last year’s U.S-led Quadrilateral talks on Afghanistan where Afghanistan, Pakistan and China were on board.

Involvement of Afghanistan in Russia’s February conference suggested it is in no row with Afghan government, nor it counts on it because Moscow has found out that the Afghan government has stoked insurgency and facilitated floods of rebels into where that poses a direct security menace to Russia.

Moscow is heavily engaged in conflicts, largely in Syria and it has a profound idea that waging a single war comes too costly. Admittedly, Russia backs down to avoid clash, but it doesn’t mean it is unwilling to stand up to gauntlets thrown by its nemesis. To build up defensive capability amid ISIS’s arrival into northern Afghanistan provinces, Russian president Vladimir Putin in a meeting with his Tajik counterpart the other day declared that it would send reinforcement to Tajik border with Afghanistan.

Russia feels bullied by intensifying insurgency in Afghanistan and allows itself to build own regional coalition as a display of power to the U.S. It is quite surprising that Moscow warmed to Pakistan, an all-weather U.S. ally, in an attempt to hold ISIS back. Last year, Moscow and Islamabad came together to stage military drills, even as Russia is conscious of Pakistan’s support of Jihadists against Soviet forces in Afghanistan.

In so doing, Moscow work out to get a fairly large foothold in terrorism-related talks and plans and subdue part of the U.S-led movement bearing down on Russia. While it embraces the fact it may not win the entire game in its favor, it is a dominant voice in the world and able to turn many potential powers into its bloc in the war against the U.S.

Russia could dazzle powerful countries in the region by being one of the largest manufacturer of military arms and hardware and this characteristic is enabling it to have important actors around it. It is open to become an alternative source for those who turn back to United States. As part of this bid, Moscow might have tabled some offers to the states involved in the latest Moscow talks on Afghanistan. Any such development by Russia could purposefully or spontaneously question the hegemony and over-dominance of the U.S. in the great region.

Getting in touch and negotiation with the Taliban and the United State’s closest ally Pakistan was among top items of Moscow’s agenda in an effort to show up potential of wresting its proxies in the region and take lead of a similar rebel force against its strongholds in Afghanistan.

The U.S. has demonstrated it over time that it is tough on sharing power and prefers confrontation. If the current Russia-U.S. diplomatic efforts and cold war derails into hot war and the use of arms, Afghanistan may really become another Syria and this is probably when the ongoing Russia’s non-U.S. and U.S.’s non-Russia counterbalance and the so-called “Afghan peace” dialogue go from bad to worse and to a tipping point where a direct or proxy war is on the cards.

Russia is emboldened to say that if the United States comes along great distance with hyped “fears of being threatened by terrorism in Afghanistan”, so does Russia feel unsafe.

Russia is strongly unwilling to step military in Afghanistan, not just out of bitter defeat and exit in 1989, but mostly to avoid sparking another fire. Russia saw a barrage of criticism in Afghanistan over outright support of Taliban against ISIS’s surge. It was quite impetuous to reveal its relationship with Taliban which made room for Western media to take after “Russia’s support of terrorists”.

It is not a war of Taliban or ISIS; it is rather confrontation of powers and superpowers in Afghanistan in the cover of extremists. Whenever a warring side plans to give a kick to the other, it channels it through radical groups. Afghan war is not just fought between Russia and the U.S., it is as well flared up by Pakistan-India hostilities and occasionally by Saudi-Iran feud.

Moreover, the United States’ interests are not just running counter to Russia’s; it also clashes with Britain’s stakes in Afghanistan. The starkest example of this conflict of interest is the latest deployment of U.S. marines in southern Helmand province.

Why Helmand? Isn’t it for what the province is globally famous? Yes, drug and the rare earth elements (REEs).

In the United States’ viewpoint, the Britain has had enough of drug trafficked out of Afghanistan and now it can’t take it anymore. Helmand province is still under heavy fire despite being massively stationed by British forces in more than one-and-a- half decade long war. The U.S. marine’s deployment amid no promising security developments suggests it seeks to shrink British military’s engagement and run over part of that lucrative territory.

Vladimir Putin’s special envoy for South Asia, Zamir Kabulov in an interview with Turkey’s Anadolu agency in January voiced concern over the number of United States military bases and continued presence in Afghanistan. He added that if Russia does the same in Mexico, it would be disturbing for America. In a more rhetoric part of interview, he said “Come on, you are not talking to stupid people, we know the reasons [for the ongoing U.S. military presence in Afghanistan]. Russia will never tolerate this”.

His remarks give away the ground realities behind U.S. military bases which are primarily aimed to Russia. The rare verbal attack reveals that the tension between duos still runs high. From a Russian perspective, the U.S. keeps riding its operations in Afghanistan in a nonchalant way.

Referring to U.S.-Afghan Bilateral Security Agreement, he said he warned Afghans from the very beginning that it may have implications for our bilateral relations if the U.S. uses this infrastructure against our national interest.

“They [Afghan government] said the Americans had promised. Well, we know the value of American promises”, he added. “Such a move would not be an invasion in terms of a U.S.-Afghanistan bilateral security agreement”.

What he meant here was that the U.S legalized its invasion and is closely intertwined with the government of Afghanistan.