Fifteen years ago, I began telling everyone who would listen (and a whole lot of folks who wouldn’t) that 9/11 was a false flag operation. Gradually, month by month and year by year, more and more people joined the “truth movement.”

They ignored us for years, then tried to laugh at the “crazy truthers.” Sean Hannity invited me on his show in June 2006 to bark out “most people think you’re a nut.”

Then they fought back, as more than 1,000 full-time workers at NSA were tasked with keeping a lid on 9/11, according to former NSA officer Wayne Madsen’s sources. Obama’s information czar Cass Sunstein announced a government program to “cognitively infiltrate” the 9/11 truth movement in order to “disable the purveyors of conspiracy theories.”

Then they fought back harder: The internet was severely tampered with to prevent 9/11 truth from “breaking out.” During the run-up to the 9/11 anniversary in 2013, Russia Today broadcast a documentary entitled “9/11 and Operation Gladio” — and just as it began going viral and heading for millions of views, it suddenly disappeared from search engines. Emails featuring the url fell into a black hole in cyberspace, never to arrive yet never to bounce.

But they couldn’t stop the truth from slowly leaking into the public sphere. Public faith in official institutions gradually eroded. The election of certified “conspiracy theorist” Donald Trump last fall signaled that the mainstream reality has crumbled, for better or worse.

And this week, the expression “false flag” entered the mainstream media’s vocabulary.

First, Donald Trump suggested that the week’s wave of apparent anti-Jewish vandalism could be a false flag.

The Atlantic also reported on a false flag operation (at CPAC) without explaining the term.

And the National Review reported that famous economist Robert Reich is accusing Breitbart of running a pro-Trump false flag in Berkeley.

So what will happen if the usual suspects try to convince us that Iran attacked a US ship in the Persian Gulf? Patrick Clawson of WINEP, a leading Zionist-neocon think tank, went on record a few years ago calling for such a false flag.

But I’m not sure it will work. False flag awareness may have already risen high enough that “Operation Clawson” would backfire. 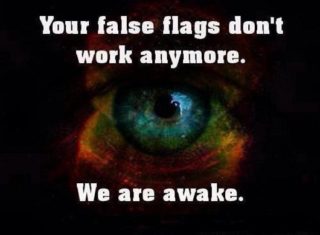 One of the reasons that false flag awareness is spreading like wildfire is the availability of high-quality analyses of recent false flag events. So don’t miss this chance to be a part of history! Please tune in every week to False Flag Weekly News, and  check out my edited False Flag Trilogy when you get the chance!