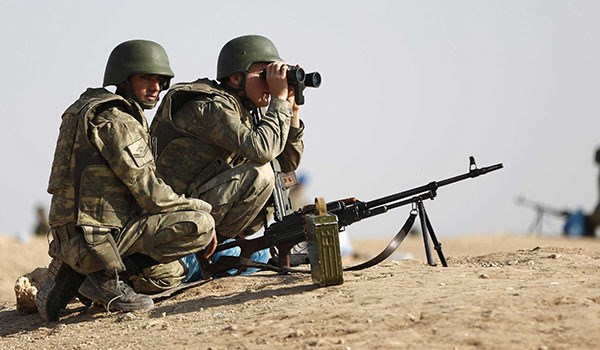 TEHRAN (FNA)- The predominately Kurdish Syrian Democratic Forces (SDF) warded off a joint offensive of the Turkish soldiers and Ankara-backed militants of the Euphrates Shield Operation West of the town of Manbij in Northeastern Syria, killing at least 14 Turkey-led militants.

On Saturday, Kurdish fighters of the Manbij Military Council fended off an offensive of the Turkish Army and Ankara-backed militants of the Euphrates Shield Operation West of the town of Manbij in Northeastern Aleppo and managed to seize control over a village in a pursuing counterattack.

The Kurdish combatants of the Manbij Council warded off offensives of the Turkish soldiers and the militants of the Ankara-led Euphrates Shield Operation in the villages of Tal Tourin, Korhiyouk and Olashli, killing at least six forces of the Euphrates Shield and seizing a large volume of arms and ammunition.

The Manbij forces further carried out a rapid counterattack and seized control over Jubb al-Hamir village, some 34km to their Manbij.

The military council of Manbij announced in a statement on Thursday that the Kurdish forces will surrender the villages bordering the areas occupied by the Turkey-backed Euphrates Shield Operation militants to the Syrian army.

Then, Turkish Foreign Minister Mevlut Cavusoglu on Thursday announced that his government has called on the US to evacuate the Kurds from Manbij in Aleppo province immediately, rejecting the agreement between the Kurds and the Damascus government.

Cavusoglu referred to the Euphrates Shield Operation in Northern Syria by the Turkey-backed militants, and told reporters that the Turkish forces have not yet moved towards Manbij but they will start operations in the region soon.

Cavusoglu also said that Ankara and Moscow have agreed to prevent clashes between the Syrian government forces and the Turkey-backed opposition (the Free Syrian Army militants), claiming that both of them pursue the same goal of annihilating the ISIL.

Elsewhere, he stood up to an agreement between the Kurdish-led Syrian Democratic Forces (SDF) and Russia to surrender the villages controlled by the Kurds in Manbij to the Syrian government.

His remarks came as the military council of Manbij announced in a statement that the Kurdish forces will surrender the villages bordering the areas occupied by the Turkey-backed Euphrates Shield Operation militants to the Syrian army.

The statement said that based on an agreement with the Russian side, the control of these villages will be given to the Syrian government’s border guards.

It added that the measure will be taken to maintain the security of civilians residing in Manbij and the surrounding areas as well as regions bordering al-Bab in the Western side of Manbij, and take on the greed of Turkey to occupy the Syrian territories.

The statement was issued after sources in Tal Rifat Town’s Military Council affiliated to the Turkey-backed Free Syrian Army (FSA) militant group disclosed on Wednesday that the council forces will no more partner in the Euphrates Shield Operations against ISIL in Northeastern Aleppo as they are preparing to shift war to their Kurdish rivals within the Syrian Democratic Forces (SDF).

The Turkey-backed Euphrates Shield Operations is fought by various units of the SDF and backed up by the Turkish army. The SDF is comprised of a Kurdish majority and a minority of Arab fighters mostly from different units of FSA and defected members of Ahrar al-Sham and Al-Nusra that are all called as moderate militants by the US, Turkey and their allies.

The Kurdish units of the SDF have long been complaining that they are fighting on the frontline and, hence, sustain most casualties, and whenever they earn a victory, “the Turkish army sends them to other battle scenes and delivers control over conquered lands to the Arab FSA.

Cavusoglu’s warning that the Turkish military men are readying to attack the Kurds in Manbij came after the militant-affiliated Syrian Observatory for Human Rights (SOHR) on Wednesday reported some sources in Tal Rifat Military Council as saying that the council would stop its mission under the Ankara-backed Euphrates Shield Operation to start battling the Kurdish members of the SDF in Northern Aleppo to capture the villages under their control.

The SOHR further added that the Tal Rifat Military Council that is operating under the FSA is getting back to the region (Northern Aleppo) with its forces and military equipment to start attacking the Kurdish forces in their positions.

In response to the militants’ invasion plan, the Syrian army initiated plans to tighten security measures across the regions stretching from East Aleppo to the Kurdish populated territories in Afrin Canton to block any possible advance by either the ISIL or the Turkish soldiers and their allied militants fighting for the Ankara-backed Euphrates Shield Operation.

A top placed military source revealed that the Syrian Army intends to carry out a clean-up operation in the towns of Jubb al-Sultan, al-Za’aroureh, Jubb al-Homam and Jubb al-Khafa and the villages South of Manbij to strengthen its lines of defense along the strip that stretches to the Kurdish-held region in Northeastern Aleppo in order to prevent any effort by the ISIL terrorists to bypass the government-held regions.

Cavusoglu displayed his country’s anger and opposition to the agreement between the Kurds and the Syrian army by denying it, claiming that “there are all sorts of news and speculation. This is all untrue. We are now seeing that the Syrian government forces are moving to the East”.

But the Turkish foreign minister, meantime, stated that Moscow and Ankara agreed on the prevention of clashes between Turkey-backed opposition Free Syrian Army (FSA) and government forces.

“We have agreed with Russia on the prevention of clashes between the [FSA] and the Syrian government forces in order to intensify the fight against ISIL,” Cavusoglu said on Thursday.

But later reports by other world media confirmed FNA’s Thursday report over the agreement.

The villages will be surrendered to the Syrian government in the coming days, an official in the Manbij Military Council told Reuters. An earlier statement by the council said the villages would be handed to Syrian border guards.

Turkish President Tayyip Erdogan said this week Manbij was the next target of Ankara’s campaign in northern Syria following the capture of nearby al-Bab from ISIL last week.

“We will move towards Manbij after the al-Bab operation is completed, but the operation has not started yet. We know that the US special forces are in that region, and we want the YPG to leave Manbij as soon as possible,” Cavusoglu said.

In February 2016, The Kurdish “People’s Protection Units” (YPG) prevailed over the terrorists in the highly strategic city of Tal Rifat in Northern Aleppo and captured the city. YPG constitutes the Kurdish section of the SDF that also includes the Turkey-backed Arab FSA militants.

But months later, Turkish President Recep Tayyip Erdogan warned the Kurdish fighters to leave all areas under their control in Northwestern Syria and move to the territories on the Eastern side of the Tishrin Dam on the Euphrates.

The Kurdish population lives in three regions, known as Cantons, in Northern Syria, with the Afrin Canton being located on the Western side of the Euphrates stretching over the Northern parts of Aleppo province with Manbij as its most important and most internationally known town.

The Kurdish fighters won back Manbij from ISIL in weeks of bloody war on August 8, 2016. A few months later, the Turkish president warned the Kurds to withdraw from the town and surrender it to the Turkish army or wait for a massive attack.

In mid-November 2016, Spokesman for the Manbij Military Council Sherfan Dervish voiced his forces’ readiness to fight against the ISIL terrorists and Turkish army in Aleppo province in Northern Syria.

“The Manbij military council is ready to repel any possible attack by the ISIL and Turkey,” Dervish told FNA at the time.

He noted that the SDF’s mission in Manbij ended as per an agreement signed by the two sides, adding that the SDF forces returned to their previous positions.

“The armed groups present in Manbij now are all under the auspices of the Manbij military council because the council can thwart any possible attack by the ISIL and Turkey and combat aggressors to maintain stability and security in the city,” Dervish added.

In early August, the SDF pushed ISIL back from the entire neighborhoods of Manbij in Northeastern Aleppo after over 70 days of non-stop bloody clashes with the terrorists.

Also in August, the Military Council of Manbij in Aleppo province announced that over 4,000 terrorists had been killed in tough battle with the SDF since the beginning of Manbij liberation operations.

“A sum of 4,180 terrorists have been killed in the battle over Manbij and the dead bodies of 1,724 of them are with the Kurdish forces,” the military council said.

The council said that 112 ISIL terrorists were in custody of the Kurdish forces and 144 different kinds of military vehicles had also been destroyed in Manbij battle.

In late August, a Turkish-backed terrorist ringleader said that his militants intended to head towards Manbij to take the city from the Kurdish forces who could drive out the ISIL in early August.

Colonel Ahmed Osman, the commander of Sultan Murad terrorist group, told the Arabic service of Reuters that the Turkey-backed forces were “certainly heading towards Manbij” since the SDF had fortified their positions instead of evacuating the strategic city.